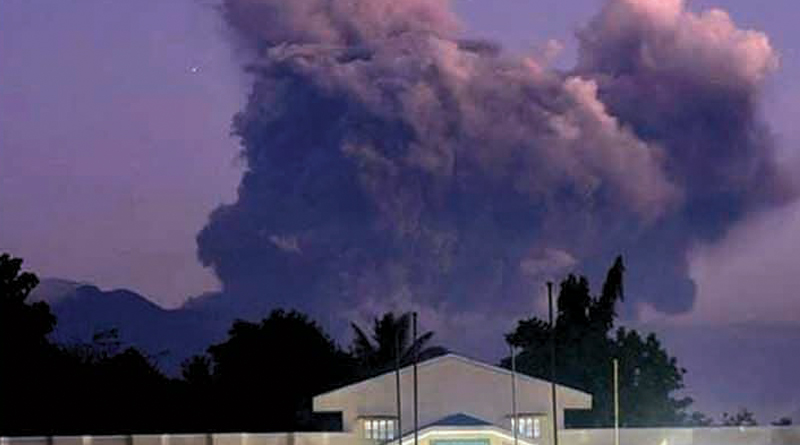 The wrath of Mt. Kanlaon in nearby Negros region spares Bohol and Cebu while the volcanic eruptions remained within below the â€œmajorâ€ level.

Philippine Institute of Volcanology and Seismology (PHIVOLCS) Director Renato Solidum Jr. described that the eruptions of Mt. Kanlaon in Negros island are only intermittentÂ and not a major eruption as he allayed fears that the eruption might affect either Cebu or Bohol at the current situation.

Solidum was in Bohol on Monday for a press conference on the Phivolcs-DOST Info-Sentro for the training of teachers on the operation of broadband seismic stations in at least three areas in the provinceâ€”Talibon, Garcia-Hernandez, and Tagbilaran City.

The eruption will only affect Bohol or Cebu if it becomes stronger and blows ashes high and the wind carries it toward the neighboring provinces.

â€œIf the eruption becomes stronger and major, and if produces a very tall eruption, and the wind would go towards your directionÂ doâ€™n lang mangyayari. Alam mo ang hangin ay habagat or amihan. Hindi kayo masyadong maabot,â€ according to Solidum.

He explained that the eruption is propelled by boiling of ground water wherein there is pressure on the steam that is produced during the boiling and usually produces ash.

When the wind heads to Cebu and Bohol, just then the ashes will reach these areas, but only when the eruption becomes strong and major.

On the other hand, Solidum announced during a press conference on Monday that Phivolcs aims to expand the Philippine Seismic Network by establishing additional earthquake monitoring stations located strategically all over the country.

Phivolcs-DOST has been installing broadband seismic stations since March 28 and already installed the 85thÂ station in Tagbilaran City.

Three more broadband seismic stations will be installed in Cebu within this week â€”one in Medellin, one in San Francisco in Camotes Island, and one in Dalaguete.

The broadband seismic stations will significantly benefit the province through increased detectability of events and more accurate and timely determination of earthquake parameters of events generated by active earthquake sources in Bohol, according to Solidum.

Solidum said these instruments should be taken care of because â€œit is not easy to replaceâ€.

The housing costs around P1 million each, while the instrument costs P2.5-P3 million.

The Censor can detect earthquakes from around the world.

Phivolcs will place these instruments in strategic areas to form a triangleâ€”Maasin, Leyte in the east, Surigao del Norte in the south and Cebu in the north.

Solidum said these parameters are important inputs for detailed delineation of earthquake hazards that could possibly affect the province which will then be used for disaster prevention, mitigation, preparedness, and response plans of the province. This will help teams to respond properly when an earthquake occurs.

In line with this, Phivolcs-DOST conducts a three-day trainersâ€™ training from among the teachers on â€œcommunicating earthquake, tsunami and volcanic hazardsâ€ in the city starting yesterday (April 5) until April 7.

The three-day training aims to prime selected high school teachers in seven schools under the Tagbilaran City Division on basic information about the science of volcano, earthquake, tsunami and their hazards, and how to communicate these information to prepare their students.

On April 8, the Phivolcs team will be in Garcia Hernandez in the morning and Talibon in the afternoon. On April 11, they will be in Lazi, Siquijor.

Through the information campaign, Phivolcs intends â€œto capacitate teachers to help schoolchildren learn how to prepare, respond, and protect oneself during earthquake and tsunami since children are vulnerable to the dangers brought by these occurencesâ€.

Solidum also explained that the magnitude 7.2 earthquake on October 15, 2013 in Bohol â€œwas generated by the reverse fault movement of North Bohol Faultâ€ and had caused a score of damage in different municipalities.

He said Phivolcs has also been conducting multi-hazard mapping and re-assessment and validation of previous hazard maps in Bohol.