Roxas over Duterte is forecast in Bohol 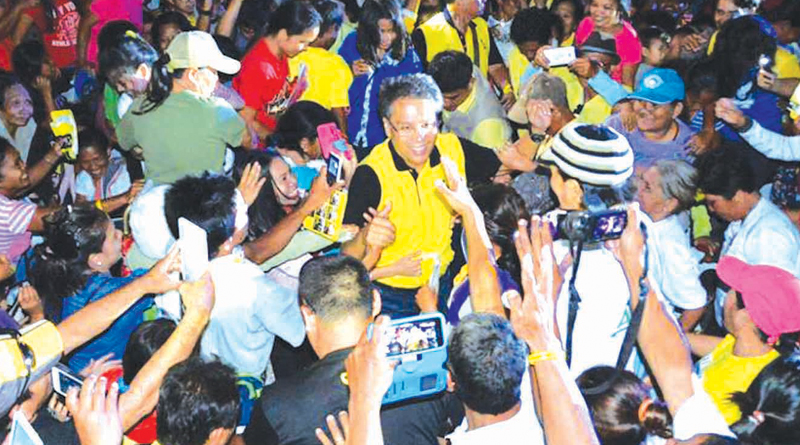 Roxas over Duterte is forecast in Bohol

The vast machinery of the administration Liberal Party is forecasting a victory for Mar Roxas and Leni Robredo in the province as a huge rally almost matched up the crowd of leading presidential timber Rodrigo Duterte in Ubay town last Wednesday.

Bohol which is a known administration bailiwick is expected to rally the support for the LP standard bearers as each of the 47 town mayors were asked to commit an LP victory in the May 9 polls which is barely 15 days away.

Roxas and Robredo arrived here by chopper for a whirlwind visit to Ubay and Pilar towns where a huge crowd of supporters were on hand to welcome the party which included senatorial bets Franklin Drilon, Risa Hontiveros and Cresente Paez.

Overwhelmed by the huge turnout of people at the two rallies, Gov. Edgar Chatto who is running for his third and last term said he saw the “silent majority” who are supporting the candidacy of Roxas and Robredo. He said that while survey results show Duterte ahead in the presidential race, he can “feel the Boholanos’ deep appreciation” to the Aquino administration for the vast development projects implemented here.

“This expression of gratitude is shown with their support to Roxas and Robredo and the local LP slates,” Chatto confidently said when interviewed byÂ The ChronicleÂ after the Ubay rally.

Ubay re-electionist Mayor Galicano Atup, in a separate interview said it was an unprecedented show of support for Roxas and Robredo while he thanked the Ubayanons for making the right choice.

If the turn-out of people would be taken as the basis, Roxas and Robredo’s victory in the province is already inevitable, according to Prov’l Administrator Ae Damalerio who is the LP campaign manager.

It may be noted that Boholanos showed their support to Duterte during his visit where well attended rallies in Ubay, Panglao and the capital city.

Bohol Poll will come up again with another survey a week before the election.

Political observers said the Pantawid Pamilyang Pilipino Program (4Ps) is perceived as a political tool in campaigning for the administration party.

Already over P3.088 billion has been granted to almost 60,000 Bohol beneficiaries since the program to uplift the most needy has been dramatically expanded when Aquino assumed president and Chatto as governor in 2010.

Some government social workers, whose agency handles the 4Ps, dared say that Boholanosâ€™ high net optimism of a better life based on a recent survey may also well indicate the programâ€™s impact on the household-recipients.

But while he profusely thanked the president, the governor wants a fuller satisfaction resulting from all other interventions pursuant to the provinceâ€™s sustainable development and inclusive growth agenda.

Of the 10 LGUs with highest number of beneficiaries, eight are in the Second District—with Ubay at number one—while the remaining two are in the Third District, namely, Carmen and Pilar.

Based on their number of 4Ps recipients, the 10 localities having the most number of the poorest of the poor are Ubay, Talibon, Carmen, Getafe, Inabanga, Pres. Garcia (formerly Pitogo) which is an island-town, Buenavista, Trinidad, Bien Unido and Pilar.

According to the Philippine government website, the 4Ps â€œis a human development measure of the national government that provides conditional cash transfer to the poorest of the poor.â€

In providing quality education to children of poorest families, the program enrolled more than 36,000 beneficiaries in state universities and colleges as of January 2015 alone, the website said.

High poverty indicators have long rooted precisely for past lest interventions or intolerable neglect, but Chatto said these are more of a challenge to true leaders inheriting the problem.

â€œThis challenge should always call us to use our full capacities even if some who are equally responsible may just rely on their limit, if not blame others for their own failures,â€ the governor said.

This is, in fact, one underlying principle of the â€œHEAT IT Boholâ€ agenda of Chattoâ€™s administration with Vice Gov. Concepcion Lim, yet the governor would further like to call it â€œeverybodyâ€™s agenda.â€

Many government agencies and offices as well as private sector groups supporting the agenda programs, projects and activities have themselves attested to their essence and impacts.

According to them, claiming adversely just to negate the gains is both an indictment and an insult to all of them that have converged and acted together in harmony and one direction to a greater province,Â a happier people.