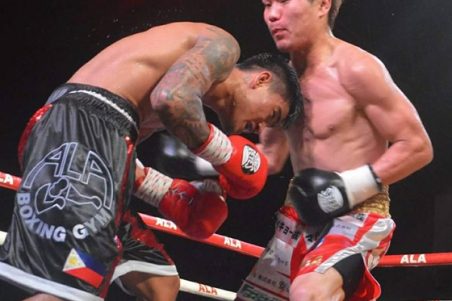 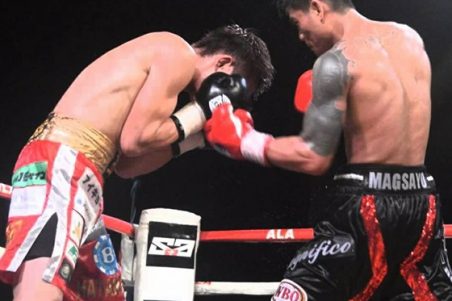 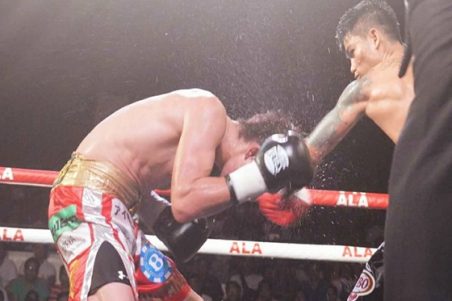 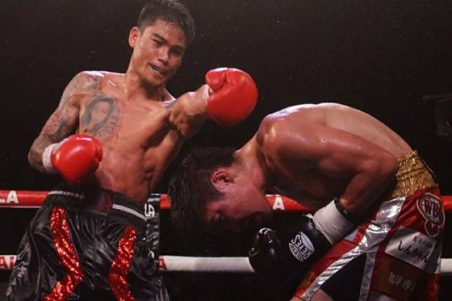 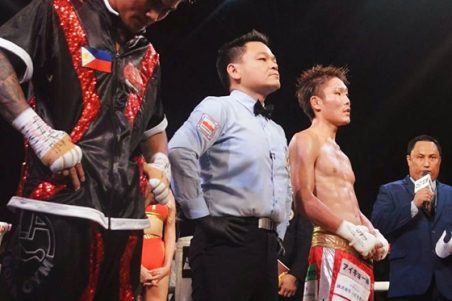 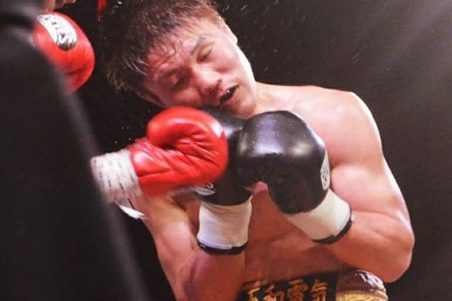 Mark Magsayo in front of a capacity crowd at Bohol Wisdom School gym in Tagbilaran City kept a pesky Shota Hayashi at bay to secure a victory through a unanimous decision against the Japanese to the delight of his hometown audience during the main event of “Pinoy Pride 43: The Battle in Bohol” on Saturday night.

Magsayo, fighting for the first time in Tagbilaran City since 2014, had his hands full against Hayashi who made a gallant stand against the hometown favorite, but all three judges scored the 12-round bout 116-112 in favor of the Boholano who defended his World Boxing Organization (WBO) international featherweight belt.

In a post fight interview, Magsayo admitted that Hayashi was a tough opponent.

The Japanese slugger put up a sturdy defense in the first two rounds keeping an aggressive Magsayo at bay but the Boholano started to heat up in the third round unleashing a flurry of punches.

The relentless Magsayo connected with heavy blows to the face and body of Hayashi whose defense started to wane through the following rounds.

Hayashi’s face started to slightly swell up in the fourth but he regained composure in the fifth and sixth rounds handing Magsayo several blows to the head and body.

Although slightly losing steam starting the ninth round, Magsayo again rallied and continued to connect against the resilient Japanese.

Magsayo remained undefeated improving his record to 18-0 with 13 knockouts, while 30-year-old Hayashi’s record dropped to 30-7-1 after what was possibly the latter’s final boxing match.

Hayashi had previously told media that a loss to the young Boholano slugger would mean the end of his 12-year boxing career.

On the other hand, brighter days are ahead for the Tagbilaran native who aspires to dominate the featherweight division which was once ruled by Manny Pacquiao who last fought as a welterweight.

Magsayo had earlier bared his desire to fight Oscar Valdez for the latter’s WBO world featherweight title and the latest triumph brings him closer to that goal. (Allen Doydora)

The Commission on Elections (Comelec) in Bohol has imposed a province-wide reshuffling of election officers ahead of the May polls.… 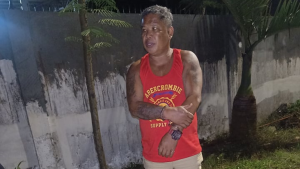 NOTE: THIS STORY WAS FIRST PUBLISHED IN THE BOHOL CHRONICLE’S SUNDAY PRINT EDITION. The Sangguniang Panlalawigan (SP) of Bohol on… 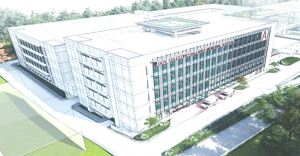