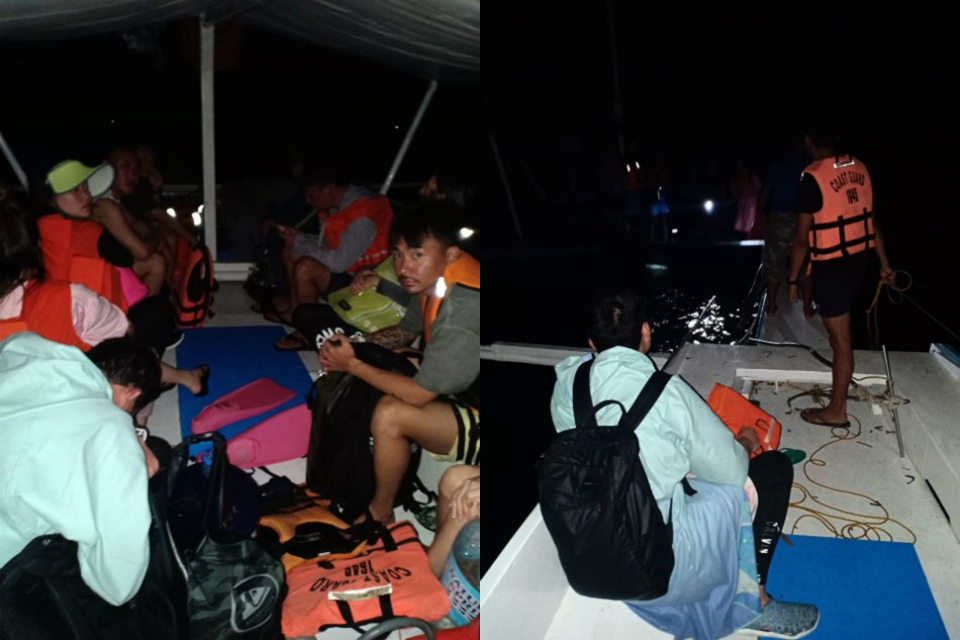 CEBU CITY — At least 10 Chinese nationals were rescued Thursday evening off the Balicasag Island in Panglao, Bohol after the engine of their motorbanca conked out while sailing back to Panglao beach, the Philippine Coast Guard-Central Visayas on Friday said.

Lt. Junior Grade Michael Encina, spokesperson of the PCG in Region 7, said the PCG Balicasag received a distress call from a motorbanca last Thursday evening, reporting engine trouble while transiting in waters off the Balicasag Island.

At first, the men from coast guard from the Balicasag station embarked in a difficult search and rescue operation because the boat captain, Anthony Lariosa, could not relay the exact location, Encina said.

Despite difficulties in locating the motorbanca carrying the 10 tourists from China, the coast guard rescuers took chance along the waters between Balicasag Island and Sumilon Island of Oslob town in Cebu.

“On or about 7:40 p.m., Coast Guard Balicasag personnel were able to locate the distressed motorbanca owned by Go Deep Diving and Tours at seven nautical miles from Balicasag Island,” Encina reported.

“On or about 1030 p.m. 29 August 2019, Coast Guard rescue team together with the ten rescued Chinese nationals safely arrived at the Alona Beach in Tawala, Panglao. All in good physical condition,” Encina said, adding that the distressed motorbanca was escorted by a sister motorbanca en route to Tagbilaran for detention by the Coast Guard Bohol while awaiting for adjudication due to violation of its route.

Encina explained that the registration of Go Deep’s motorbanca covers Panglao area. “The motorbanca went to Sumilon island first before going to Balicasag Island. It experienced engine problem while sailing back to Panglao,” he said.

“The 10/30 (10 minutes response time for Coast Guard personnel and 30 minutes for PCG vessel) response time implemented in Coast Guard-Central Visayas has achieved a 100 percent search and rescue success rate in the region,” he added. (PNA)