Doctor Concepcion “Conching” Lim, Bohol’s first and only female vice governor, was laid to rest on Saturday afternoon at the Valencia Catholic Cemetery in her hometown of Valencia.

Lim was brought to her final resting place after being given the final honors at the town’s municipal hall and a Requiem Mass which was led by Bishop Abet Uy at the Sto. Nino Parish Church.

The late vice governor’s family members as well as friends and supporters were present during the internment.

During the burial rites, former governor and now First District Rep. Edgar Chatto accorded the posthumous Congressional Plaque of Merit to Lim, who was a mayor, barangay captain and Provincial Board member before elected as vice governor, in recognition of her 28 years as public servant.

Lim who held office as vice governor from 2010 to 2016 was Bohol’s second highest-ranking public official when the province was devastated by a 7.2-magnitude quake in 2013, the worst calamity to hit the island in recent history.

Chatto remembered Lim for her support and active participation during rescue and rehabilitation efforts when the province was left reeling from the disaster.

The quake hit Bohol at past 8 a.m. on October 15 but Lim managed to convene the Sangguniang Panlalawigan (SP) to declare a state of calamity in Bohol at noon on the same day.

“I am greatly thankful to Nang Inday. She was always at my side together with the SP in responding to the critical emergency, rehabilitation, and recovery during the great earthquake,” said Chatto.

Lim died of lingering illness at the age of 82 on December 15.

Various officials in the province mourned her death including Governor Arthur Yap who called her an “empowering” figure in both public service and politics.

The SP honored Lim through a resolution passed on December 17 as tribute to her contributions as vice governor and presiding officer of the legislative body for six years. 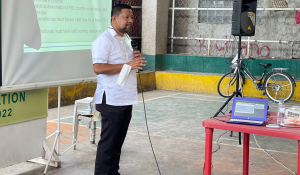