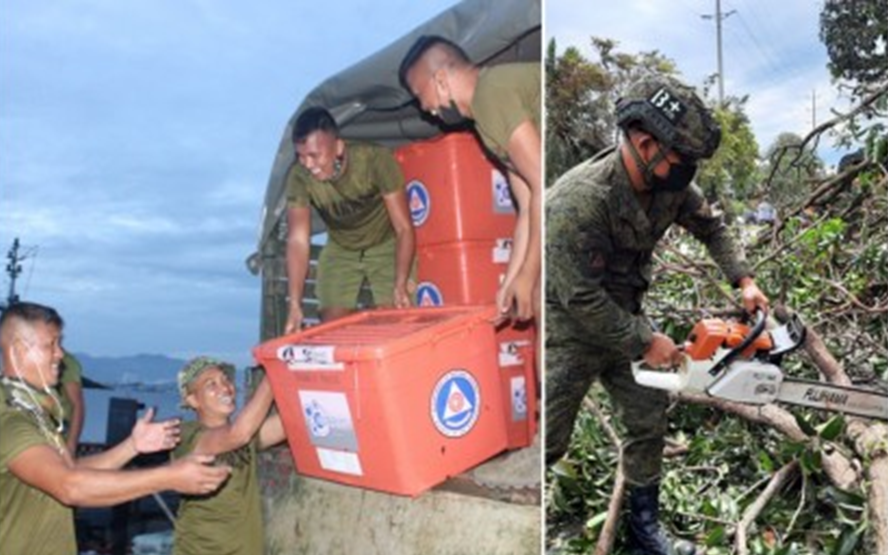 CEBU CITY – The commander of the Armed Forces of the Philippines’ (AFP) Visayas Command (Viscom) on Monday commended soldiers for continuously delivering relief goods, food packs, hot meals, and other services to typhoon victims, a month after the onslaught of Typhoon Odette.

“The Filipino Bayanihan spirit is indeed in full display in the aftermath of the typhoon. Viscom being your ‘Servant in the Visayas’ serves as an instrument of the generosity of our kababayans (town mates) who willfully extended support to our brothers and sisters in the region without asking or expecting something in return,” Dauz said.

The AFP Logistics Support Command in collaboration with Viscom deployed its Mobile Kitchen with personnel from the 82nd Infantry Battalion, 14th Civil-Military Operations (CMO) Battalion, and 3rd Community Relations Group to facilitate the immediate distribution of some 23,325 hot meals to typhoon victims in 10 localities in the province.

The Navfrocen of the Philippine Navy, on the other hand, facilitated the delivery of 1,532,875 tons of assorted relief items from other regions to the typhoon-affected provinces in the Visayas while Towcen of the Philippine Air Force had 165 flights delivering 10,533 assorted food packs to the affected areas.

The 53rd Engineer Brigade of the Philippine Army, along with the United Architect of the Philippines – Cebu Chapter, was also cited for the clearing operations in the southern district of Cebu City and distribution of hundreds of family food packs to southern towns of Cebu province.

“In the midst of the Covid-19 pandemic and the onslaught of the Typhoon, the 53rd Engineer Brigade spearheaded the road clearing operations, hauling of water supplies, and offered the use of the Brigade generator to provide free electricity in order for the residents to recharge their gadgets, emergency lights, and headlamps. The electricity provision by the Brigade proved to be very helpful especially to the students who are going through modular learning. The students were given a chance to continue their studies and cope with their school requirements,” Camaganacan said.

In Bohol, the 47th Infantry Battalion collaborated with local government units in hauling and distributing assorted family food packs to 26,562 families all over the province. (PNA)