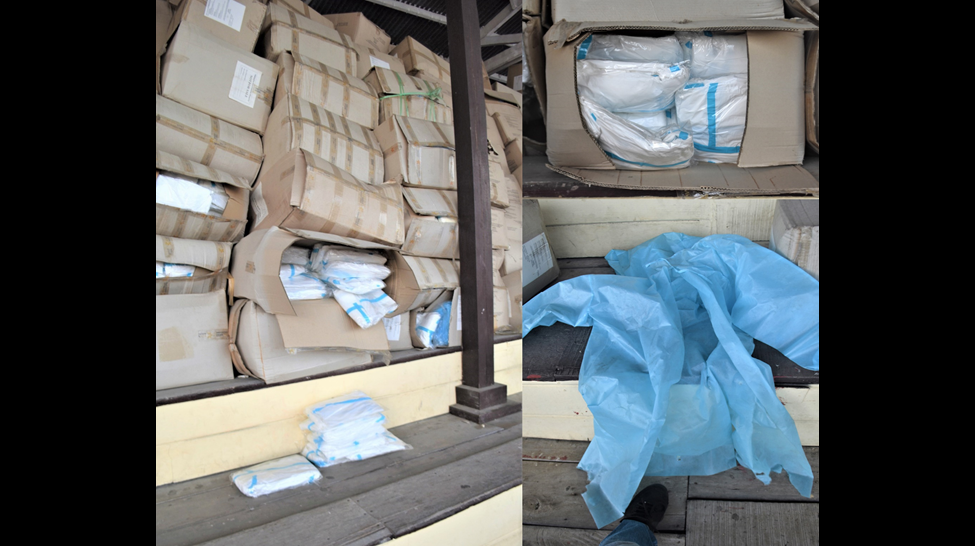 The PPEs in gowns colored light blue and white with blue stripes are contained in boxes but nobody knows how many were delivered to the provincial government.

Based on the sticker on each cartoon of the PPEs, the procuring entity is DOH and the supplier is SPRO Medical Products (Xiamen) Co. Ltd. Located in No. 139 Factory Bldg. Tongan GDN, Tongan Industrial are, Tongan, Xiamen, China.

When asked about it, a reliable health officer said that the Department of Health (DOH) delivered it even though the provincial government during the past administration did not ask for it.

The source added that the provincial government made no purchase and no money was spent on PPEs that were loaded in wing vans and delivered to the province.

Another reliable source said that there still are a lot of unused or undelivered face masks provided by DOH. In fact, they’re now stored at the Provincial Disaster Risk Reduction Management Office (PDRRMO).

The source said that it would be hard for the provincial health office to deliver them when it cost the province expenses and it seemed the towns are no longer needing them.

It will be recalled that medical kits procured during the past administration intended for senior citizens are in question since these appeared to be irregular, according to another reliable Capitol source, who asked anonymity.

The said medical kits, containing medicines, identification cards, medicine withdrawal slip booklet, among others, are put on hold based on the alleged recommendation of the Commission on Audit (COA), the source said.

The source said that only the medicines are being distributed.

This writer tried to contact the Department of Health here for comment but to no avail. (rvo)