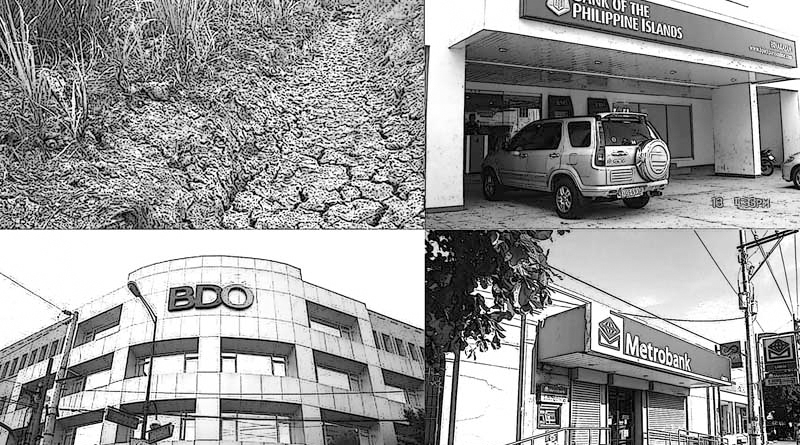 Speaking before finance executives of FINEX recently, BSP Gov. Armando Tetangco is wary of the current Â raging El Nino (started in December 2014) which is expected to last till the last half of 2015.

The El Nino phenomenon that results in warming of the West Pacific Â area (due to ocean surface high temperature) results in a drought-when a place suffers three consecutive Â months of below normal rainfall as had happened in 23 of the 71 provinces in the country. Bohol is the only Visayan province that Â we found in that list.

Particularly affected are Northern Luzon and some provinces in the Visayas where parched earth affected staple food growth like that of rice resulting in year-to-date Â losses of about US$239-Million (about P 10-Billion) where Isabela, Nueva Ecija and Caraga have, in fact, Â declared a “state of calamity”.(If Bohol agriculture continues to suffer, Gov Chatto can also declare the same “state of calamity” and seek additional national funds for rehabilitation and coping).

Fifty four percent Â rice, corn ,tobacco and other high value crops in Northern Luzon had been adversely affected. Increase in irrigation pumps and attempts at cloud seeding apparently have not made much dent on El Nino, in the nation. Previous attempts in the recent past in Bohol for cloud seeding had been more successful,

The fact is that 47 percent of Philippine Price Consumer Index is made up of food of which 9 percent is accounted for by rice. The negative Â impact on food prices , analysts say, can Â therefore lead to a higher than expected inflation rate or about Â 4 percent.

One of the BSP tools to answer inflation is an increase in interest rates Â which can lead to several basis points rise in the cost as well of sovereign bonds of RP. It means the P64,000 per capita debt (computed total national debt divided by total population of RP) that individual Filipinos will theoretically pay for- will cost more now in in terms of interest payment.

In more advanced economies, the rise in interest rates significantly alter the bullishness in Â many sectors like the Â stock market negatively. Â Corporations Â who are dependent on borrowings anywhere , meantime, Â can face some struggle.

Agriculture economists are sharply watching whether the El Nino will increase in severity worldwide since this can affect food prices globally. USA and Â Japan report that agriculture output has been affected by El Nino is the USA, Canada, South America, Australia, Mexico and India.

In some water deficient areas in the country, on the other hand, , water rationing is possible and those Â provinces dependent heavily on hydroelectric power source can face outages. Bohol is only partly that kind of dependent; it is Â more on geothermal power from Leyte through underground cable.

Tetangco believes the entry of better technology and competition will result in stronger, better managed Philippine Â banks even if the size of the latter’s Â balance sheets are not as great as some ASEAN Â bank behemoths. For instance, the assets of the Top Three RP banks is Â only equal to that of Bangkok Bank (Thailand) and only half of that of Maybank. The entire capitalization of the Philippine banking system, on the other hand, is slightly higher than that of the DBS (Singapore) and Maybank.

The BSP believes ASEAN Â banking integration (2015-2020) Â  will mean access for RP to larger Â bond and capital markets, more facility in trade settlement and transfer of funds. While bank competition from ASEAN neighbors could lead to the sharing of the Philippine market of a robust population (100 million) with a relatively young average age of 23 years old, Philippine banks can also foray into branch banking into larger, more prosperous ASEAN consumer and corporate Â markets.

Other observers point out that the presence of larger foreign banks here in the integration Â can help the Philippine Â government in financing large big-ticket infrastructure projects (highways and airports) Â and mining explorations (oil and alternative fuels, if ever). The Philippines can Â also tap nine other capital markets of the ASEAN Â without opening accounts there.

Moreover, while Europe is reeling from overseas contagion (say, the Greece crisis) , generally ASEAN nations for now , with 600 million in Â total population, are not in any particular Â grave sovereign risk difficulty for any of the 10 nations. Nor has RP any debt or large investment exposure in Greece.

All in all , RP’s joining hands in the Asian Banking Integration with Â Cambodia, Brunei, Indonesia, Laos, Malaysia, Myanmar, Singapore, Thailand and Vietnam is expected to bring more opportunities than headaches for most Philippine banks.

But we have to contend with Â El Nino, Mr Pest, first.