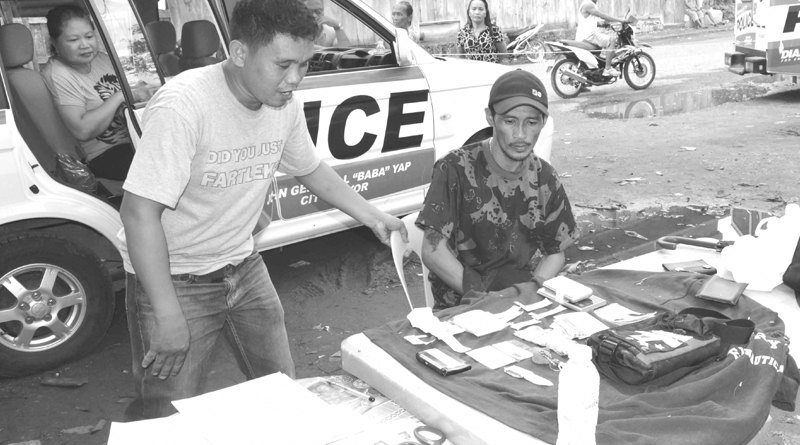 Another alleged big-time drug pusher in the city yielded around 50 grams of shabu with estimated value of P150,000.

During the buy-bust operation at around 11:30 a.m. on July 10 near his residence, the CAIDSOTG led by Inspector Quirino Geolagon recovered a sachet of shabu and the marked money.

The inventory was conducted in the presence of the media, Poblacion 1 Barangay Kagawad Ramil Patenio and representative of the Department of Justice, Saturnina Baricuatro.

Pondoc is now now temporarily detained at the Tagbilaran City Police Station lock-up jail, while waiting for appropriate charges to be filed against him for violation of Sections 5 (sale of dangerous drugs) and 11 (possession of dangerous drugs) of Article II of RA 9165 or the Comprehensive Dangerous Drugs Act of 2002 before the City Prosecutorâ€™s Office.

Aside from Pondoc, the CAIDSOTG also brought seven other persons for further investigation and verification whether they may qualify inÂ  establishing for violation of Section 7 (employees and visitors of a drug den) of Article II of RA 9165 and or not considering their presence in the premises where the buy-bust operation was conducted.

Besides city police team also found during the surveillance and test buy operation prior to the buy-bust operation that the seven persons were present â€œwith suspicious activities in relation to illegal drugs activitiesâ€.

The arrest of Pondoc followed the earlier arrest of another alleged big-time drug pusher on July 5 in Panglao who yielded 6.10 grams of shabu with estimated value of P70,800 in a buy-bust operation.

The team from Panglao police confiscated the 6.10-gram of shabu from Jonathan Arbolerasâ€”also known as Baba–a 43-year-old resident of barangay Danao, Panglao.

During the operation, the police confiscated a sachet of shabu as the subject of the buy-bust and the marked money and two medium-size sachet of shabu and four sachets with traces of shabu, all found in the laboratory test to weigh 6.10 grams.

The team of Panglao chief of police, Senior Inspector Joemar Pomarejos, already filed the complaint related to the alleged sale of dangerous drugs, a violation based on Section 5 of Republic Act 9165 or the Comprehensive Dangerous Drugs Act of 2002, before the Provincial Prosecutorâ€™s Office on Monday last week.

Pomarejose said that based on intelligence report, Arboleras had been peddling shabu to foreigners who visit Panglao.

The police tagged Arboleras as one of the suspected big-time shabu pusher operating in Panglao.

In Sagbayan, a team from the municipal police station confiscated eight small sachets containing suspected shabu placed inside a while plastic film case during a raid in the house of one Jack Senio Jamisola in barangay Canmaya Diot at around 6:45 a.m. yesterday.

The team led by SPO4 Samuel Diaz Nacua conducted the raid based on a search warrant issued by Executive Judge Suceso Arcamo of the Regional Trial Court (RTC) Branch 47 in Tagbilaran City.

The subject, Jack Jamisola was not in his house during the raid.

The raiding team swooped down his residence, based on a search warrant issued by Executive Presiding Judge Dionisio Calibo Jr. of the Regional Trial Court Branch 50.

During the raid, the police team recovered six packs of shabu, an unlicensed caliber 38 revolver with five ammunitions, and drug paraphernalia.

Lopena also said they found an area in Lagangâ€™s house that seemed to have been set for pot sessions, but no one was caught sniffing shabu during the police operation.