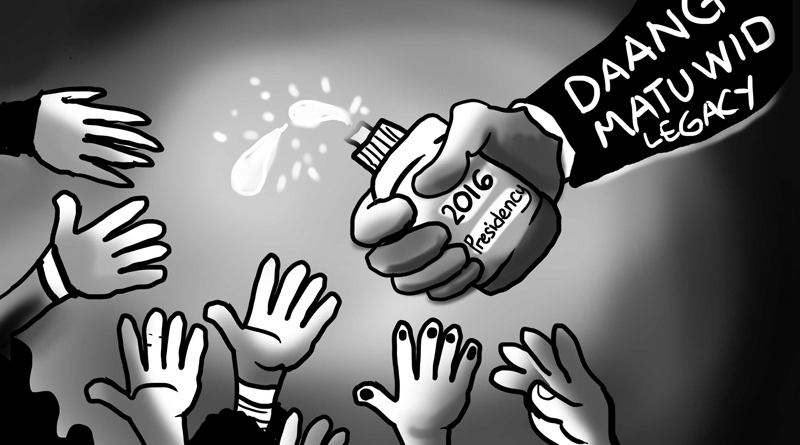 WHAT CAN BE ASSUMEDÂ  when Â the President states Â that he wants a “United Coalition” for the 2016 elections in order to continue with hisÂ Â “Daang Matuwid”Â program?

One assumption is that Vice President Jejomar “Jojo” Binay -despite the bloody badgering he has been getting from all fronts- will survive impeachment and plunder charges , enabling him to gun for the presidency in 2016.

There are political analysts who postulate that even if one can prove that the vice president is the brother of Belzeebub (devil incarnate), there will still be 20% of 10 million of the 50 million voters who will stick with him, come hell or high water. Even if hell, itself.

If there are 5 capable presidential candidates in 2016, there is Â a legitimate fear that it would be much easier Â to surpass Binay (20%) convincingly if Â among the Coalition’s leading bets,namely, DILG secretary Mar Roxas and independent-Coalition member and survey top notcher Senator Grace Poe – only one of them will run for president.

Will it be then a Roxas-Poe Â tandem in 2016 for such a Coalition?

Perhaps it is better to try as intelligently as possible to forecast who would probably be left standing for the presidential race when the dust settles and all are faced with the necessity of filing their certificates of candidacies by October 2015.

There is the gunslinger 70- year old Â Davao city mayor Rodrigo Duterte who has named two recent requisites for him to run for president.His survey rating will hit 40% before October and if has the money. The first one is unlikely to happen-and the second one may be hard to raise from Big Business Â because while they may like criminality to lessen (under Duterte), they are also afraid of the excesses of an Iron Hand , having seen the likes of Ferdinand Marcos.

For Duterte, it is the presidency or nothing in 2016 -and rightly so. At 70, he will already be 76 by the next presidential year Â in 2021, too old for anything, much less the presidency.

On the one hand, we frankly think Erap for all his pronouncements of another presidential run, knows in his heart , his body can only hurdle the arduous tasks of a city mayor but not the presidency. Besides, we heard the Estrada family is against it -because they truly care for what is good for Erap.Â  Senator Miriam Santiago is slowly speaking less of the presidency and is probably facing the answers related to the souls’ immortality , given the Â medical problem she is facing.

The above reasons could have prodded, and confirmed by Nacionalista stalwart senator Â Cynthia Villar that senator Bongbong Marcos had already made known his intent to run for the presidency.Â  No one could be more ecstatic than his mother , Rep Imelda Marcos of Olot, Leyte.

A Manila columnist said the Government had taken back US$4 Billion of the alleged US$5-B stolen wealth of the Marcoses. So Marcos still has about P45-Billion somewhere (as alleged) to spend plus the machinery of the NP if the party eventually supports him with their network.

NP maverick senator Antonio Â Trillanes IV has declared his VP candidacy regardless of the NP support for him. Where does that leave senator Allan Cayetano who also Â has moist eyes for a higher office. That’s for the NP to resolve.

Then, there is former senator Panfilo Lacson who has declared his desire to be president. However, his ratings remained at 1-2% all these months. His new alleged benchmark is Â that Lacson will gun for the presidency if his ratings go Â at least 10%. That’s unlikely to happen ,now that he is out of government and cannot be in the limelight for projects.

The logic of the Political Genius in Malacanang is probably that three Coalition members Â (Roxas, Poe, Marcos) could theoretically split their bailiwick and inadvertently give the presidency in a silver platter to Binay. What happens to the “Anyone but Binay ” mantra of the Coalition?

Obviously, the ideal situation for Aquino is a One Coalition Candidate vs VP Binay. Is that going to happen?

To defuse the impact of a possible “No” by Grace Poe to be Mar’s vice-president, Roxas had dropped names of Duterte and now exiting governor LP actress Vilma Santos (wife of senator Ralph Recto running for reelection) as his VP. The Rectos -in the past and now-, however, sees Vilma retiring after Batangas in 2016 otherwise they will pan the new age-old Â old rivalry of Vi Vs Guy (Aunor) who will most certainly endorse the daughter of FPJ, every actor’s idol.

Senator Poe who had never said she was aiming for any higher post had declared she will remain independent and that if ever , she Â would prefer Chiz Escudero to be her running mate (also as independent). As independents , the Poe-Chiz cannot, therefore, Â be an LP official Â tandem but will a bigger Coalition back them up?

Grace Poe would, of course, prefer to get an endorsement of Aquino because that will confirm she is the “Choice” to continue theÂ Daang MatuwidÂ of the president. Will she go ahead anyway even if Pnoy endorses Roxas as candidate after the SONA?

Right now, senator Grace Poe is the big winner in both the presidential and vice presidential surveys. She is not just The Dark Horse or White Horse , if you wish, but the (Wo)man to Beat. Why should she not be calling the shots-instead of being directed which path to tread in 2016?

Popularity, money and machinery are needed to win, let’s face it. Grace is hands-down most popular and we figure it is not impossible for a collage of interests to raise P3-Billion for a Â “Poe for President” war chest.Â  The machinery-with enough money- will be created if people know they are betting on a winning horse.

Senator Grace had deftly said she will make a decision near October when she shall have completed here “program of government”. That essentially means Poe may or may not run regardless of who the president will endorse in July after the SONA.

Our gut feel is that it is when the September Pulse and SWS surveys come out- Senator Grace will make her historic move.

She will have known by then if she has transformed into a runaway locomotive or if she Â has been Â effectively stopped dead on her tracks.