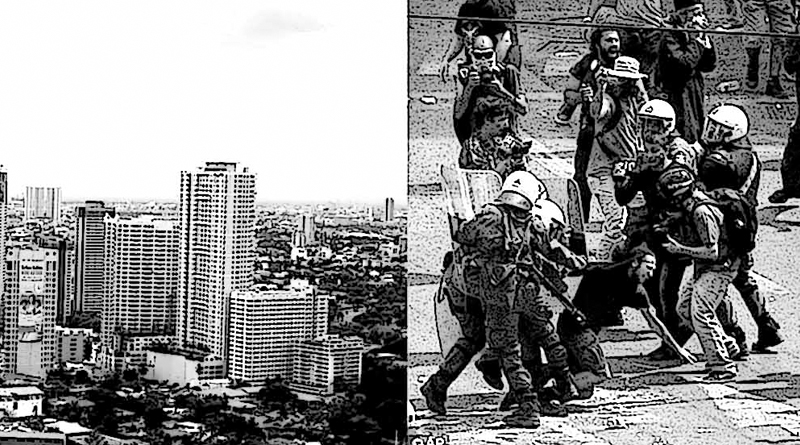 MAYBE BRITAIN WAS RIGHT Â in not joining the 29-nation EU (European Union) Â and the 19 nations that share a common currency called the Euros.

Since the Britons adhere to the philosophy that a Â regional union is only Â as strong as its weakest link (and Britain is a mighty nation), they Â perhaps foresaw the current 5-year old exploding Greece crisis that could lead to a “Grexit” that could Â destabilize the region. Sounds Greek to you?

While RP has been the second highest GDP growth rate in Asia (next to China) in the last few years, the Greek GDP was actually sliced down in value by 25% since 2010. Thus its total mountain of debt Â worth E320-Billion has become Â 177% bigger than its entire GDP.

It is technically in “international default” for not honoring a E1.5 Billion IMF debt Â repayment schedule last June 20 Â and could face another default with the European Central Bank (ECB) of E3.2 Billion come Â July 20.

The Troika of the IMF, ECB and the European Commission already granted a “Bail-Out’ package twice in the Â total amount of Â E240-Billion (almost equal to its entire debt) and Â Athens may still seek for a third bail-out plan with a request for some “debt forgiveness”.

It is a country in chaos-dependent on shipping and tourism industries- with only the “emergency loans” of EU keeping their banks from collapsing but limiting daily withdrawals of ATMs to only US$60 (about P2,700). Unemployment rate is at a high 26%.

The Greek Crisis started in 2008 with the implosion of Wall Street due to the real estate -based over financing. By 2009, Greece admitted it had fudged its macro-economic figures by understating its deficit. This destroyed the trust and confidence of the international community. That was Â political suicide.

The RP Central Bank was caught doing that same atrocity Â in the last dying years of the Â Marcos dictatorship that morphed the nation into an international pariah and hastened the downfall of the dictator in 1986. The Â then Â newly-minted president Cory Aquino, the darling of the Free World, refused to ask for debt condonation – and with honor, Â and even for honor alone, paid every cent of our debt according to schedule.

RP was back into international respectability-and in Pnoy’s time was rewarded with the so-called “Investment Grade”, the highest credit rating in our entire history.

The laundry list of demands of the Troika on Greece to get the third bailout funds RP had already done through the Â past many years of the post-Marcos era.

Greece’s shipping companies were to be slapped with higher taxes and the 30% tax shelter of the rich tourist oriented islands had to be removed to shore up government finances. We had long destroyed monopolies and erased unjust tax structures for “protected industries” and economic zones Â in the past.

Greece is forced to take up 23% VAT by force but RP had voluntarily raised our VAT to 12% during GMA’S Â time and thus Â strengthened our fiscal footings. Greece was also mandated to privatize its many international ports and sell its ownership in the giant telco called OTE. RP had done large scale privatization Â long ago since the time of FVR and our policy (since then) has been “less government in business is Â always better”.

Greece is not at war ,so the Troika is looking at reducing their military spending by E 300-Million. RP has been modest, too modest in fact , with our defense expenditure so that our military capability Â today is a joke. Â But we surmise that such was a policy Â choice between providing basic social services for the poor rather than buy guns and jet planes.

The big lesson in Greece Â facing us today is in the face of the burgeoning ASEAN integration (akin to the EU), Â is that RP should go slow in Â any discussion seeking our participating in having one ASEAN currency . We should try to be as smart as Britain in that respect.

Let’s lived up to our economic management billing- we are no Greeks.