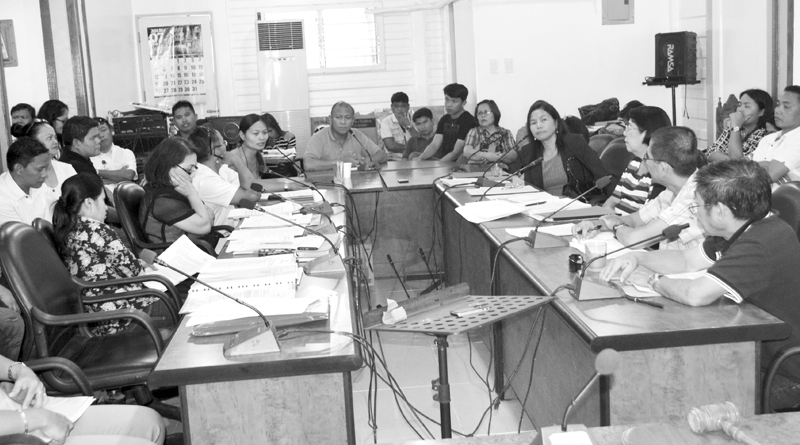 TAGBILARAN CITY â€“ The joint committees of the city council swung into fact-finding probe in aid-of-legislation over the complaint filed against city schools superintendent Dr. Evangel M. Luminarias of the Department of Education in this city.

Â There are no more anonymity on the part of the protesters as they came face-to-face with the â€œrespondentâ€ during the hearing conducted yesterday by the committees on Â Ethics, Education and Human Rights/Public Accountability chaired by City Councilor Atty. Augustinus â€œDodongâ€ Gonzaga.

Â The complainants, composed of teachers and non-teaching personnel of the city division, reiterated their previous demand: Relieve Luminarias from her present position and â€œto sanction her the proper damages in court for her ill motives of oppression,â€ the executive summary of the joint committee hearing said.

The violations were allegedly committed by Luminarias â€œinflicting injury upon teachers, pupils, rank and file employees and stakeholders of the DepEdâ€ in this city, the executive summary said.

The stakeholders include Private Schools Association, Schools Parents Teachers Association and the Catechist of the parishes represented by their parish priests of each barangay, it said.

The executive summary said that the alleged violations â€œare substantiated with affidavit and statement of facts to prove to the public that the persons appearing this court and hteir testimonies are executed by own will and volition without any sanction or pressure from any person or entities, for the purpose of letting everyone know especially those who are in the right position to mediate our cases for we cannot anymore trust the DepEd Tagbilaran City grievance committee to handle our plight to stop oppressionÂ  in our workplace.â€

Complainants said in the executive summary that their accusations against Luminarias are based on facts and testimonies of those personnel affected.

The allegation of â€œmaltreatment and persecution using her authority with willful intentional neglect often enforced by threats or by the imposition of burden to the employees to the employee and to the organizationâ€ is suppoted with affidavit of Mrs. Marina Salamanca, OIC-ASDS, Bohol Division; Mrs. Neolita Sarabia, principal, Dampas Elementary School; Letter from the Diocese of Tagbilaran through the Vicar General Msgr. Vicente Nunag III; and testimonies of Mr. Marcelino Pelin, principal, Bool elementary School; Mr. Basilides Sempron, school principal, Manga Elementary School; Liza E. Maquiling, planning officer II, the executive summary said.

Â Earlier, complainants and private individuals urged DepEd Sec. Armin Luistro to oust Luminarias from her present post for the allged violations of laws and other charges. In their petition-letter dated Noveber 14, 2014 Luistro, the petitioners who called themselves stakeholders of the city division â€œhave this position letter in relation to asking your honoredÂ  office to relieve Luminarias from our office.â€

In that interview, she said that she wanted to meet her detractors squarely, saying sheâ€™s ready to answer and find out what are their â€œdissatisfactionâ€ over the organization. She said that itâ€™s unfair on her part that the accusations are lobbed agains her by those who remain anonymous.

She said she urged the complaints to come out to the open since sheâ€™ll be glad to face them in proper forum in the name of transparency. She said thatÂ  she has nothing to fear about because sheâ€™s God-fearing person.

But Luminarias said she considered all these as trials under her leadership, saying that â€œequality and fairnessâ€ is what her leadership is promoting. But if the alegations are all deliberate to ruin her personality, then she has nothing to do about it, she said.

Gonzaga has suspended the hearing which is expected to be conducted again but the date was not announced yet.

It (hearing) was well attended by almost all media outfits in the city.

Among those who actively participated in the hearing included City Councilors Jerry Pabe, Betty Torralba, Dulce Glovasa and Philip Besas as members of the joint committee. (rvo)