â€˜SANDUGOâ€™ AND ALL THAT JAZZ 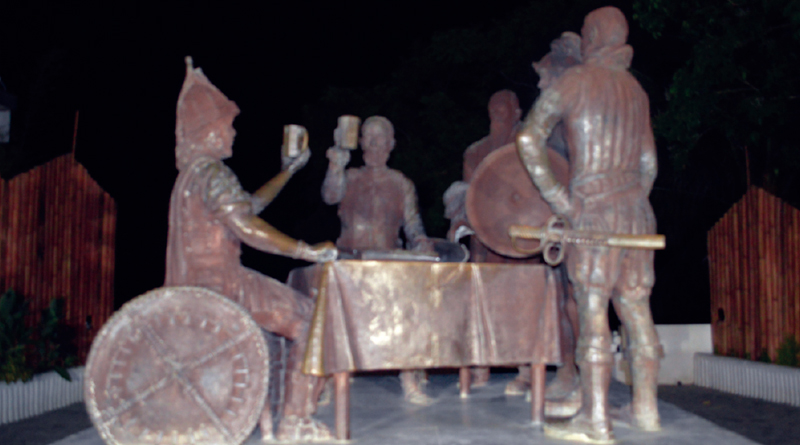 â€˜SANDUGOâ€™ AND ALL THAT JAZZ

Of course, every race has its share of scoundrels â€“ but one can safely say that the average Boholano is humble, generous and hospitable.

Hospitality runs in his blood â€“ one hears of a family vacating the Nong Tasyo will slaughter the lone pig under the house and borrow from the loan shark just to be able to serve fiesta food in May.

To a fault, the Boholano can be generous but he is none the worse for it. For such is the nature of the beast. Hospitality probably runs in our veins.

It was a tribal tradition to seal a deep friendship. Three drops of blood from the left arm of the fair skinned Spaniard and the dusky arm of Sikatuna were mixed in two goblets with wine (tuba and red wine, for all we know) and opened Spanish rule and Catholicism to our shores.

Since 1521 when Portuguese Ferdinand Magellan was in slain in Mactan by Datu Lapulapu, most of the Spanish expeditions to the East Indies in search for the â€œspice islandsâ€ were met a genuine though ritualistic gesture of friendship and globalism.

In fact, history books state that after Bohol, Legaspi with hundreds of warriors had to savagely attack in order to subjugate hostile nearby Cebu and King Tupas.

Being the icon of international diplomacy, the title of his name â€“ Order of Sikatuna, is today considered as the highest order of diplomatic excellence to be bestowed on a person by the Philippine government.

Thus we celebrate â€œSandugâ€ (One Blood) although perhaps historically erroneous in July (not March) in order to honor this Blood Compact, the first diplomatic act of international import.

This Blood Compact is so significant in Boholâ€™s history that the Sandugo scene is depicted in the provincial flag and the official seal of the province of Bohol.

Spain, too, must have been pleased with the province of Bohol then.

For their conquistador Legaspi (1502-1572) was no ordinary soldier â€“ he was born to Basque royalty (Don Juan Martinez Lopez and Dona Elvira) in Guipuzcoa Spain and planted the Spanish flag and the cross across Luzon, Visayas and Mindanao.

Spending even most of his personal fortune as well, Legaspi died due to a heart attack as a poor man in 1572 and his remains were laid to rest in San Agustin Church in Intramuros, as a final gesture of respect for the man often called El Adelantado (The Governor) and El Viejo (The Elder).

Today, the Sandugo celebration will be capped by the momentous street dance competition, a huge festivity where dancers will be egged by the rhythmic sounds of xylophones, drums and trumpets. It is a major tourist attraction like the Sinulo in Cebu (celebrated every 3rd Sunday of January).

This Sandugo street dancing is comparable to the Mardi Gras celebration of dance, music, comedy and food fests in European Catholic countries but most prominently in Rio de Janeiro Brazil, Quebec City in Canada and New Orleans, Louisiana USA.

The celebration was preceded by the 156th foundation anniversary of Bohol Day marking itself as an independent province from Cebu last Thursday.

Todayâ€™s Sandugo street dancing episode will be graced by no less than the second highest elected public official in the land Vice President Jejomar Binay.

All in all, Sandugo and all that jazz is really capturing the barest essence of Boholano hospitality and the colorful Street Dancing reflects the happy nature of our people amidst hardships of life.

And foreigners notice that. Recently, Derek A Page (Director for Trade and Investment) of the British Embassy in Mckinley Hill Fort Bonifacio in Manila told the Chronicle that he had traveled around the world â€“ but found no people as genuinely happy as the Boholanos he met in his brief stay in the province.

For the generally snooty, stiff upper lip Englishmen to say that â€“ should end the Sandugo festivities with a happier note.

Letâ€™s drink to that, then â€“ from Sikatunaâ€™s goblet, preferably.