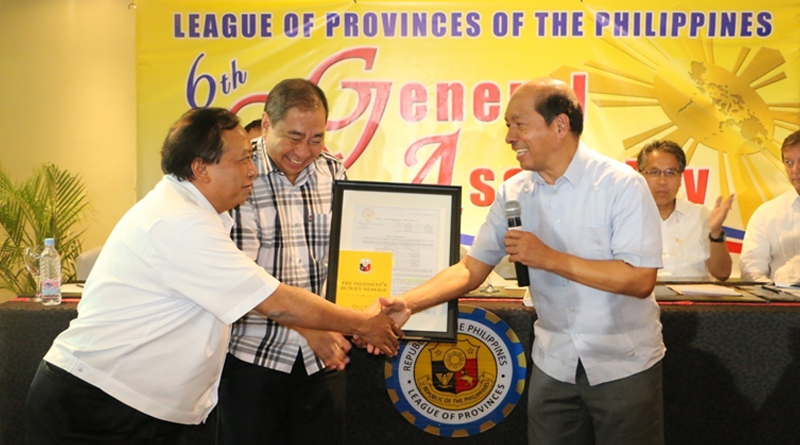 MalacaÃ±ang has approved for 2016 spending the new P6.5 billion annual local road incentive for provinces after a lobby mounted by Gov. Edgar Chatto with full support from his Â fellow governorsâ€™ across the country.

The huge fund to rehabilitate roads in Bohol and other priority provinces in its first implementing year is now included in the National Expenditure Program (NEP) as required for spending authority from Congress.

Department of Budget and Management Sec. Florencio Abad turned over an NEP copy to the League of Provinces of the Philippines (LPP) in its 6thÂ General Assembly at the Discovery Suites, Ortigas Center in Pasig City on Tuesday.

Along with the NEP turnover was the launching itself of the so-called Provincial Road Network Development Program (PRNDP), which crafting technical group in the governorâ€™s league is led by Chatto.

Department of Interior and Local Government (DILG) Sec. Mar Roxas explained Â to the governors the downloading of funds in the implementation of the P6.5 billion PRNDP, also known as KALSADA Program.

Roxas and Abad also detailed the downloading system for the provincial Bottom-Up Budgeting (BUB) implementation at over P24 billion in 2016, as also strongly lobbied by the league,Â  from the current P11 billion.

There are road works as well under the BUB but implemented at the municipal or level while KALSADA/PRNDP focuses on provincial road networks.

These networks link to national roads to areas of economic development, allow access to basic services and serve as important conduits during conflicts, crises and calamities.

Abad turned over, too, a copy of the 2016 budget message which Pres. Benigno S. Aquino III submitted to Congress last July 28, a day after his sixth and last State of the National Address (SONA).

Chatto said the league is counting on the strong support of â€œfriendsâ€ in Congress for the legislative sealing of the spending authority for the impact programs.

The Bohol governor himself presided over the LPP assembly when the league president had a separate meeting with the DILG secretary, who thanked the governorsâ€™ support to his cabinet task.

The PRNDP/KALSADA template has been provided by the experiences of Bohol and other select provinces where the Philippine Provincial Road Management Facility (PRMF) has been piloted.

There are 10 pilot provinces of the PRMF, a program mainly aided thru the Australian Assistance for International Development (AusAID) and Department of Foreign Affairs and Tariff (DFAT) in partnership with the DILG and provincial governments concerned.

Chatto, Gov. Jose Alvarez of Palawan and Gov. Adolph Edward Plaza of Agusan del Sur were selected PRMP and open road experience presenters during the assembly of the league, which has 81 member provinces.

The program is performance- and readiness-based downloading of funds and, thus, prodding provinces to be more competent in infrastructure management and accelerating countryside development.

The league signed with the Philippine College of Surgeons, through Â its president Dr. Arturo Mendoza, Jr., a memorandum of agreement on free, voluntary missions and services in provinces.

This can help in post-operative cases following surgical missions, which frequency and number of beneficiaries in Bohol yearly may not easily be matched in any other provinces.

Lawyer George Katigbak of the Foundation for Economic Freedom presented the special patents for LGU-owned lands.

From the governorsâ€™ assembly, Chatto proceeded to Quezon City for the 77thÂ National Executive Board Meeting of the Union of Local Authorities of the Philippines (ULAP), where several other impact programs straddled on the agenda.

As soon as he touched down at Tagbilaran airport yesterday mid-morning, the governor sped to several Bohol Â towns, catching up with his awaited commitments..Â (Ven rebo Arigo)Â