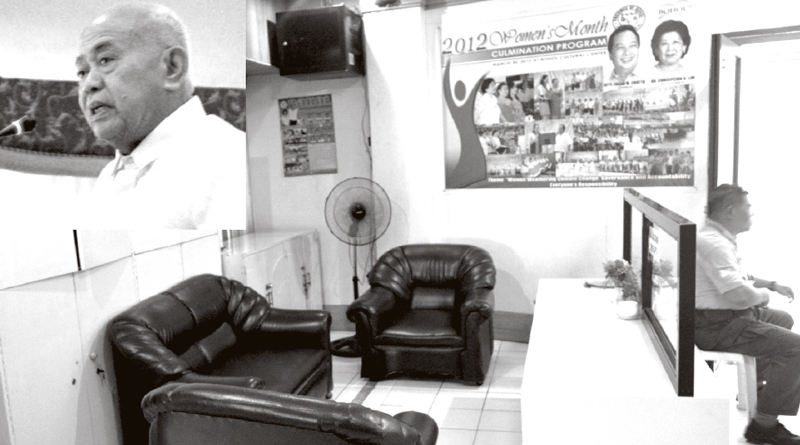 Amid Capitolâ€™s aggressive drive against illegal drugs, contraband still managed to find its way to high-profile officeâ€”no less the pre-session cubicle of the Sangguniang Panlalawigan.

The find of at least three packs of shabu on July 16 under the sala set in the ante-room of the Sangguniang Panlalawigan session hall where the board members would hold pre-sessions slipped the publicâ€™s prying eyes until the privilege speech of SP Member Dionisio Balite during the regular session last Friday.

The three packs of shabu that a staff of Vice-Governor Conching Lim found could no longer be traced as of now.

In response to Baliteâ€™s inquiry, the vice governor said they had been turned over to the Philippine Drug Enforcement Agency (PDEA) already for laboratory test and other procedure, but there has been no update yet until now.

On this Balite moved that the incident be investigated.

However, none of the PDEA agents, not even PDEA-Bohol Provincial Officer Jigger Juniller has knowledge about the three packs of shabu found in the ante-room of the SP ante-room.

Juniller advisedÂ The ChronicleÂ to check it with the other PDEA agents, but PDEA Agent Erwin Purisima said there has been no such report received at their office.

Purisima said an incident report could have been prepared had it been turned over to their office.

He explained that in such incident, they would prepare the documents for the items found to be submitted to the crime laboratory for a test to determine if they were shabu.

Purisima also noted that his higher official, Agent Ma. Chona Egam, did not even mentioned about the incident during the Provincial Peace and Order Council (PPOC) meeting on August 5.

For his part, Governor Edgar Chatto warned that the provincial government will not hesitate to fire Capitol workers who would be found positive of drugs as it is inconsistent to the organizationâ€™s campaign against illegal drugs.

Casual workers will no longer be re-hired, while regular employees will be subjected to the due process in consonance with the Civil Services Commission rules and regulations.\

The Provincial Human Resource Management and Development Office will be initiating investigations and the concerned employees will be given an opportunity to defend themselves.

Chatto emphasized that the random drug tests exempt no one regardless of relationship–friendship, co-workers, and even relatives.

This is in consonance to the resolution of the Dangerous Drugs Board urging government institution to subject their employees to random drug tests to make sure authorities rid the government of drug users.

The disclosure of packs of shabu found inside the Sangguniang Panlalawigan premises challenged provincial officials to tighten the watch.

Balite raised a concern on the vulnerability of the Capitol premises to the entry of drugs even to high-profile cubicles.

The SP member urgedÂ Chatto to initiate a thorough investigation on the incident and track down the culprits, citing the Bohol Poll survey showing the increase of drug menace level in the province from 15 percent last year to 29 percent â€œvery seriousâ€ now.