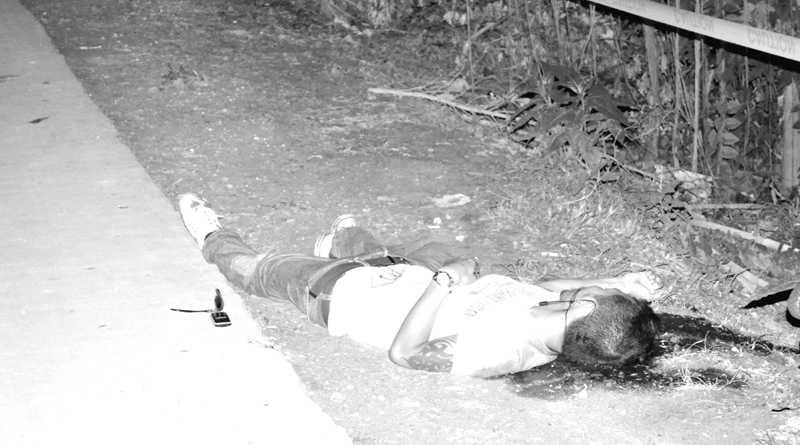 Puzzling series of drug-related shooting incidents could be the handiwork of a vigilante.

However, shooting incidents that remained unsolved invited suspicions that armed individuals other than the hitmen of drug rings have been involved, according to a classified information reaching The Chronicle.

The vigilante could be sympathizers of the law enforcers, sympathizers of victims of violence of drug addicts, or undercover intelligence officers; but it turned out to be closer to the handiwork of sharp shooters of undercover agents inspired by the Davao Death Squad, according to the information.

This cropped up after close look at the profile of the shooting incidents linked to drugs showed that most of the victims were in possession of shabu when killed.

While drug rings tend to exploit the vulnerability of drug runners who incurred delinquency in the remittance of proceeds in keeping them in the group, the victims were killed while still active in the group.

It also showed in the pattern that those linked to the handiwork of the drug ring hitmen had tried attempted to leave the group.

The latest victim was identified as one William Tan Velez, also known as â€œGudoâ€, a 34-year-oldÂ nativeÂ of barangay Upper Dela Paz, Cortes.

The victim was shot dead at close-range at around 9:30 p.m. on Thursday last week, August 13, while at the roadside of Tamblot St., near the corner of B. Inting St.

Velez sustainedÂ gunshot wounds on the left cheek that went through the right side of the face, and one at the right eye brow (second point of entry) with no exit point.

The victim had been arrested by the Highway Patrol Group in June last year along CPG North Avenue when found in possession of a cache of firearms in his vehicle, but had posted bail.

Based on the post-mortem examinations conducted by Dr. Alvert Calvelo of City Health Office, the victim died from exsanguinations secondary to multiple gunshot wounds.

Based on the statement of the victim`s live-in partner, the man and woman seen fleeing from the crime scene right after the residents nearby heard two bursts of gunfire were actually the companion of the victim.

The cellphone recovered from the victim also shows messages indicating that he had been contacted to be at the place where the incident happened that night, for an illegal transaction.

The latest shooting incident led to a classified information about the operation of a vigilante group composed of three to four hitmen going after elusive drug personalities.

Meanehile, the shooting incidents reduced in the month of July compared to the June statistics.

Based on the report of Police Provincial Director Dennis Agustin during the recent Provincial Peace and Order Council (PPOC) meeting, shooting incidents reduced from nine in June to only 5 in July.

Tagbilaran City topped with four incidentsâ€”three in June and one in July wherein three were injured and one died.

Carmen and Talibon followed with two incidents each in the two months wherein the vicims in Carmen were just injured, while those in Talibon died.

In June The Bohol Police Provincial Office also recorded four more injuries from shooting incidents in Juneâ€”one in Buenavista, one in Getafe, one in Ubay, and one in Valencia.

The record also shows two more deaths from shooting incident in July–one in Mabini, and one in Dagohoy.