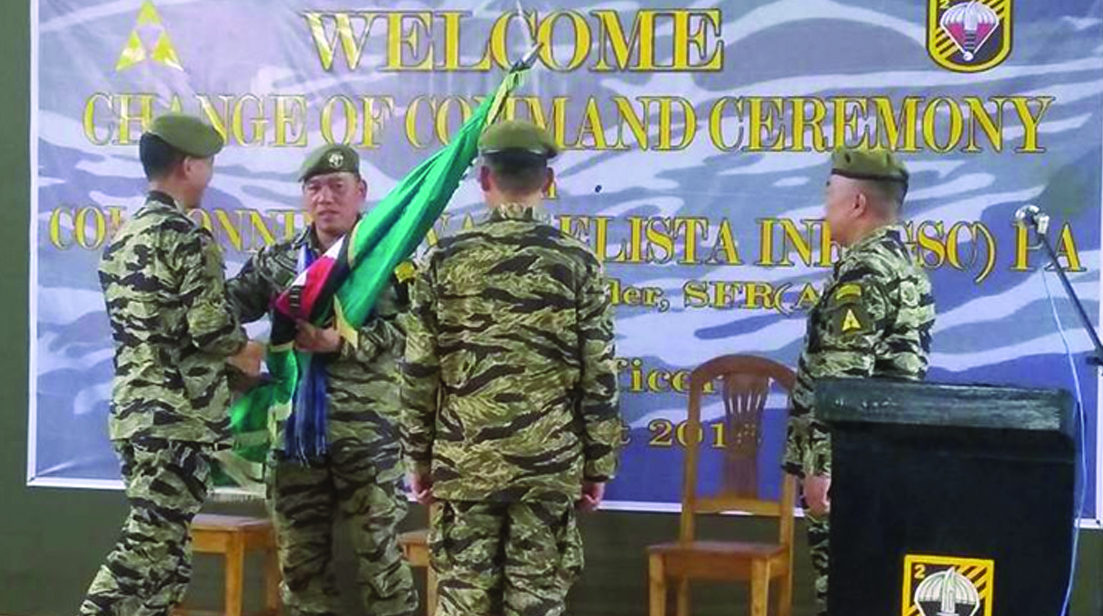 The leadership and the Â armed men under the 2nd Special Forces (SF) battalion were turned over to its new head last August 28.

The recently promoted full-pledged Colonel Potenciano C. Camba turned over the green flag of the 2nd SF symbolizing his relinquishment of command to LTC Gaspar Panopio during a solemn change of command rites at Camp Rajah Sikatuna in Katipunan, Carmen.

Col Ronnie Evangelista, regiment commander of the Special Forces Regiment (SFR) under the Special Operations Command (SOCOM) flew in from their headquarters in Nueva Ecija to preside over the change of command.

Prior to signing the relinquishment order, Camba profusely thanked the Â people and agencies that have helped fulfill his tour of duty as battalion commander of the 2nd SF for a year, most particularly the provincial government of Bohol under Gov. Edgar Chatto for his brand of leadership and sincerity in public service . Camba has served in three battalions while still a lieutenant colonel with the Presidential Security Group, 1stÂ Special Forces Battalion in Agusan del Norte and then the 2ndÂ SF here. Accepting the challenge of leading the 2ndÂ SF, LTC Panopio promised to strengthen the SFâ€™s participation in the peace and security program and strategy of the province through Â the government and the people to maintain the peace and order in Â the province. He has served as the executive officer of the 2ndÂ SF since February 2015.

Col Evangelista, who also served as the battalion commander of the 3rdÂ Special Forces battalion which was stationed in Bohol in 2001-2003, spoke of the tremendous development that has happened in the province if he is to compare the situation when he was still serving his tour of duty here and the situation now. People then were afraid to talk and be open about discussions on insurgency, fearing that the person they converse with might be from or a supporter of the leftist group. In fact, Bohol then was the bailiwick of the Central Visayas Regional Command of the New Peopleâ€™s Army (NPA) and that it belongs to the poorest provinces in the country.

Now, Bohol has been declared as insurgent-free, not by the military or the government but by the rebel groups themselves Â saying that they are now having a hard time in recruiting Â since the Boholanos no longer welcome them (NPA). Local government units and the different agencies are converging to deliver the services to the people so the people now felt the presence of the government. Less and less Boholanos are impoverished because of this bayanihan, so he urge for Â  the continued passion for peace and development of the province.

Evangelista left a word of advice to the military present in the ceremony, particularly the SF, to continue to Â maintain the trademark of discipline that the SF is known for. The people came to trust the SF and the AFP because the people saw in the uniformed men the discipline, and not abuse.

Both Camba and Evangelista believe that the Bohol experience in achieving peace and security by crushing the insurgency and being insurgent-free was the result of good governance through Â the cooperation and convergence of various government agencies, non-government organizations and the people down to the purok level, which is the thrust of the Countryside Development Program-Purok Power Movement (CDP-PPM) of which the 2ndÂ SF is also a key partner being a member of its Technical Working Group.