JUSTICE FOR THE PRIVILEGED FEW 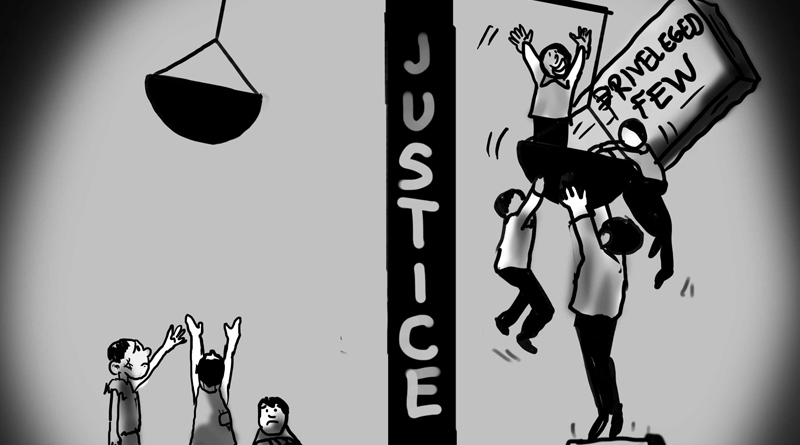 JUSTICE FOR THE PRIVILEGED FEW

MANY TIMES IN THE PAST, Â we declared that no matter how forthright one’s president is Â and upright the legislative sector is, at the end of the day , justice is only served if the Judiciary does its job sell.

The Executive and the Legislative branches can shout themselves hoarse, but it is only -and only- the Judiciary that can arbitrate what is right or wrong.

In a shocking 8-4 decision, the Supreme Court recently Â granted bail to “one powerful man”- former senate president Juan Ponce Enrile for a non-bailable offense of plunder ( P172-M over a plunder threshold of P 50-M) Â – on “humanitarian grounds”, an argument never propounded before the court pleadings and the Sandiganbayan.

Enrile’s lawyer (allegedly “advised” by the wily so-called “lawyer of the wrong” Estelito Mendoza) went straight to the Supreme Court and argued on the basis of age (91) and Enrile’s voluntary surrender (not physically arrested) as basis for the bail petition.

Dissenting justice writer Marvic Leonen argued that none in the deposition stated that the bail and release will be immediate; the SC was Â first to hear Â if the evidence of the prosecution was strong (in 15 days) and decide whether to grant or deny bail depending on their appreciation of the evidence.

The object of the SC’s “humanitarian” gesture was a senator Enrile Â but who was (the next day) strong enough to be walking free to impose himself again Â on the senate, supposedly Â to fiscalize, lead the minority , bitch about the lack of senate quorum, and without being asked – prodded the presidentiables to be “intellectually prepared” for the presidency.

Such praetorian arrogance should have made Enrile a president long time ago -for no doubt, he is the most intellectually gifted among the famous public officials of the country. (Maverick senator Miriam Santiago would disagree on the basis that birds of the same feathers always flock together and the two of them don’t). But Enrile was and is nowhere near becoming president.

The SC could argue that granting bail is discretionary on their part and perhaps concluded Â that Â “what the law does not prohibit, the law must allow.” Â But Justice Leonen counters there is no rule of court, a congressional act or Â even the 1987 Constitution which explicitly allows Â the Â use of”humanitarian grounds “as the basis for granting bail for criminal cases.

Leonen rightly argues the Enrile’s Â bail is a “special accommodation” for a powerful person, a proof of “selective justice” with no basis on “legal provisions” Â but merely on “human compassion”.

Former SC Chief Justice Artemio Panganiban is scared that the SC ruling could create a dangerous precedent for those currently facing grave charges. For instance, Â former president Gloria Arroyo who could hardly move on her own- deserves more “human compassion” and is less a “flight risk” than an Enrile and can, therefore, Â invoke the same to free Â herself from hospital arrest.

Can the Ampatuans and jailed senators Bong Revilla and Jinggoy Estrada now be potentially freed on bail without the courts first Â hearing and deciding whether the evidence against them Â is weak or strong?, Panganiban argues.

All those languishing in our God-forsaken-jails Â today who are sick and as old as Enrile should all flock to the SC now and seek the same. Will the honorable SC grant them the same?

To think- that having these arrested like Â GMA and Enrile (under hospital arrest) and senators Estrada and Revilla( under special detention cell) and not in our lousy prison cells are already – to the minds of many- proofs that justice in this country is good only Â for a select privileged few. And now this.

“Letters to the Editor” in Â the Manila papers have raised the eyebrows (figuratively) as to Â what kind of magic potion this lawyer Estelito Mendoza has – as to be being able to twist the most impossible cases into his client’s favor; that new lawyers today Â would kill one another just to be able Â to join Mendoza’s law firm and understand the contents of his legal “magic potion”.

Where does president Noy Aquino’s “Matuwid na Daan”” stand in all these?

Secondly, people are aghast that the Pnoy government and local governments appear so scared of the powerful Iglesia ni Cristo Â (INC) dubbed to wield at least at least a Â million votes for a national candidate upon the “say so” of their HighestÂ Ministro.

Just because the DOJ (Department of Justice) under Leila de Lima entertained the cases filed by some disgruntled INC members against the INC Â powers-that-be for illegal detention and harassment, the unruly INC mob occupied the premises of the DOJ (stopping traffic at Padre Faura and blocking the entrance of the Philippine General Hospital) for about two days and moved Â reportedly (without an earlier permit ) to occupy EDSA on a Friday-pay day night to give Manilenos one of the worst traffic nightmares in their God-forsaken-lives.

Normally ,rallies of that sort are only given a few hours permit. Why then did Mayor Erap Estrada allow them more than a day of protest in Manila and then Mandaluyong mayor Benhur Abalos two days yesterday and Sunday for the same ? Are they afraid of the INC vote and power?

Militants who rally during the SONA and other Â similar events are bombarded with Â water canons Â and Â truncheons for a few hours’ rally- why “unhampered” Â  protest days for the INC?Â  Where were the DILG and the PNP when the INC illegally occupied EDSA Friday night before the Mandaluyong LGU Â approved the rally permit? Where was Malacanang?

At least QC Mayor Bistek Bautista did not give INC a permit and so they had to move away from the Robinsons Galleria area (still a QC territory) towards the Mega Mall -Shaw territory (already a Mandaluyong enclave).

The INC rally protested that the DOJ’s acceptance of the “illegal detention cases” vs some Â INC officials Â  was an act of Â meddling of the State in their church affairs even as the INC Â itself -mandates their followers to “vote ” for certain candidates – an act impacting the State- by using its religious power of command during election.A Â case of pot calling the kettle black?

Where was the voice of President Aquino, reportedly a recipient of the INC support in Â the 2010 polls Â that widened his lead for the presidency -last Friday night?

Verily, we deserve the kind of justice system that we fight for.

Sad to say, the country today Â is far from having an ideal justice system – one that is just, stable, fair and equitable for all. And not just for Â a Privileged Few.