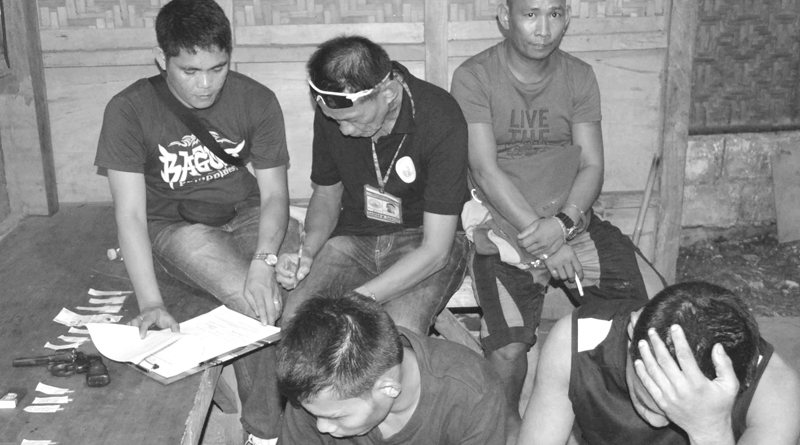 Another alleged big-time drug pusher and two other men yielded packs of shabu with estimated value of around P130,000 when frisked after a buy-bust operation recently conducted in Barangay Tawala, Panglao.

Elements of the Municipal Anti-Illegal Drugs Special Operations Task Group (MAIDSOTG) of Panglao, led by PSInsp. Joemar Pomarejos, conducted the buy-bust operation against one Rodrigo Pinpin in coordination with PDEA at around 2:10 p.m. on September 9.

Pinpin, also known as Opaw, a 40-year-old from Mambaling, Cebu yielded a small sachet of shabu and the marked money amounting to P500 during the operation, prompting his arrest.

Upon frisking Pinpin, the police team recovered three more small packs and two medium packs of suspected shabu and a .38 caliber revolver with serial no. 1039616 and loaded with three live ammos.

Also arrested were John Paul Rabon and Rayman Sordilla caught in having a pot session and in possession of three small packs and two small packs of suspected shabu, respectively.

Investigators estimated the confiscated suspected shabu to have weighed approximately 11 grams with Dangerous Drugs Board value of P129,800.

As of the first half of 2015, PDEA already recordedÂ a total of 276.89 grams of shabu with estimated street value of P3.27 million being confiscated during various police operations.

Of the record, a total of 134.57grams of shabu came from buy-bust operations, 127.19 grams from raids, and 15.13 grams from those caught in the act of possession of the dangerous drugs in the first semester of the year.

During the period, PDEA conducted 101 buy bust operations, 80 raids based on search warrants; and arrested 17 persons caught in the act and one by warrant of arrest.

In the month of August, the Bohol Police Provincial Office confiscated a total of 8.21 grams of shabu with estimated value of around P97,000.

Earlier last week, the police team from Baclayon andÂ the Provincial Public Safety Company recovered an improvised shotgun during a recent raid in a farmhouse of an suspected drug pusher.

According to the raiding team, they also recovered two live ammunitions for the shotgun aside from the one loaded in it.

Police Senior Inspector Vincent Paul Dumaguing, chief of police of Baclayon, identified the subject of the raid as one Jonathan Sumagang, a 43-year-old resident of Barangay Landican, Baclayon.

According to Dumaguing, Sumagang had been in their watchlist as a big-time drug pusher in Baclayon.

The police team conducted the raid in Sumagangâ€™s farm based on a search warrant issued by Executive Presiding Judge Dionicio Calibo Jr. of the Regional Trial Court Branch 50 in Loay.

However, Sumagang had already fled when the police team arrived.

They only caught his farm caretaker identified as one Marcelino Atunay Jr., also known Cecil, throwing a match box which turned out to contain two sachets of shabu, and two other sachets with shabu residue.

The results from the laboratory test showed that the packs of crystalline substance seized during the raid were indeed shabu weighing 0.18 grams.