TRUMP VS CLINTON IN AMERICA? 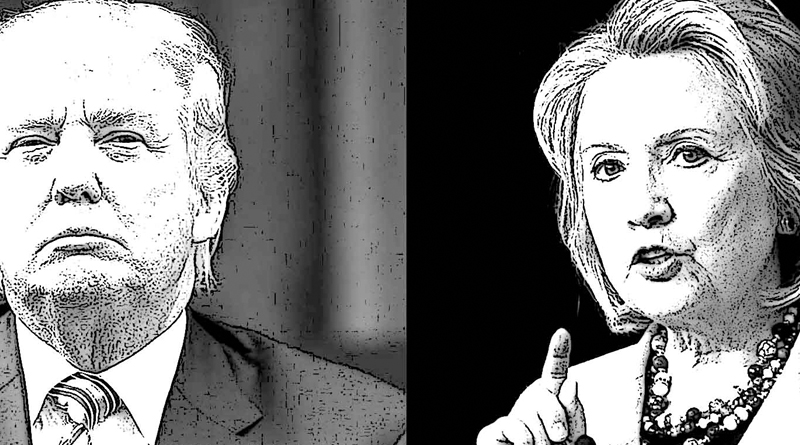 TRUMP VS CLINTON IN AMERICA?

NO, THERE IS NO Â “Return Bout” between (Democrats) Clinton family Â vs the (Republicans) Bush family in the US presidential polls, as many had earlier feared.

Businessman Jed Bush, a former president’s son’s campaign is imploding and the new darling of the moment is the talkative, arrogant but attractive (US$4-Billion-net worth) billionaire Donald Trump.

Because of wealth, Trump hardly needs the money and has called his rivals and media men names including “stiff” and “puppets”. Trump appears to many as a “non traditional politician” who may be on a “campaign of rage and anger” vs the Obama governance – which many can relate to.

Donald’s zing Â is compared to the magic appeal of the charismatic Â former president -actor Ronald Reagan who was such a great communicator -but was basically form rather than substance. Yet, he won the elections Â twice and was one of the most beloved US presidents in recent memory.

He talks the street language, extemporaneously, even as he offers people “Hope” because he wants to “make this country great again”, sounding like the dictator Ferdinand Marcos and his candied-up New Society.

Tramp cites problems, and there are many, but he does not offer any solutions; people often dub him as Â an clown and an ignoramus. But consider his spiels.

Tramp will send millions of immigrants home and save America for America. He will put a giant Wall across Mexico’s border to the USA because Mexicans are rapists and drug dealers. Â He said people do not want “politically correct” and polite politicians. They want straight talking ones.

“People want to hear someone Â who can say we beat China, we beat Japan, and steal Iraq’s Oil and stick it to Iran.” Then he quarrels even with the most respected of media personalities.

Tramp travels rich and in style with baseball cap Â to conceal a wayward hairdo but what makes him tick is his personality, not his policies of which he has none to offer. He probably wants to walk into the White House and then hire people who knows the solutions.

But Trump appears to be leading at 56% favor rate with GOP voters from 39% in July while Bush slides down there precisely at 39% and Dr Ben Carson is reporting at second place.

Does the GOP want a candidate like Tramp to represent them -thrice married to lusty girls and head of Trump Organization and Entertainment known worldwide to build edifices with the best addresses?

An establishment candidate, Hillary has the women and the strong Hispanic-immigrants vote behind her. She started hitting Tramp by saying that instead of “cherishing” women, Tramp should start “respecting” them.

But while Hillary appeared a runaway winner for Democrats last year, her popularity seems to fade and is now at 41% (in favor), lower than in 2008 when she surrendered the Democratic presidency slot to Barrack. Â It seems a senator Bernie Sanders is suddenly a contender and vice president Â Joseph Biden Jr. has been showing faint interest in the race – an opportunity that was always there if and Â when Clinton shows some vulnerability as she does now.

Hillary is a global celebrity and a media star. A lawyer and with tremendous political experience: she knows more than anyone among the candidates how to run an election campaign Â and what switches to turn on Â in the White House to get things done.

Given her aggressive stance on foreign policy with respect to Iraq, Libya and Afghanistan and her reaction to the “Arab Spring” , Clinton is expected to be a “hawk in skirt” if she becomes president. With many moneyed donors, she, however, maintains her link with the Middle Class with support for Labor causes and Obama’s health care program.

Doubtless, his physically and politically attractive ex-president husband Bill – will be a strong campaign adjunct.

If the two Â (Donald and Hillary) figure out in the ring one on one for the US presidency, it will be a spectacle to behold.

An uncouth, gung-ho, shoot from the hip campaigner versus the polished, learned vote getter of old. A non traditional politician and Â a political animal as if inside the zoo born. A man Â of the world- billionaire and a conservative community personality type of individual.

A man Â versus a woman. A man with immense wealth and a Â woman armed with Â countless alliances among the rich and famous. Â A man who Â promises hope and a woman who has already been working on it. Â A promise of change Â and a continuation.

Will the USA finally have the first woman president ever? Or will Donald simply say “That Lady’ is a Tramp”- all pun implications intended. Â With apologies to Frank Sinatra.