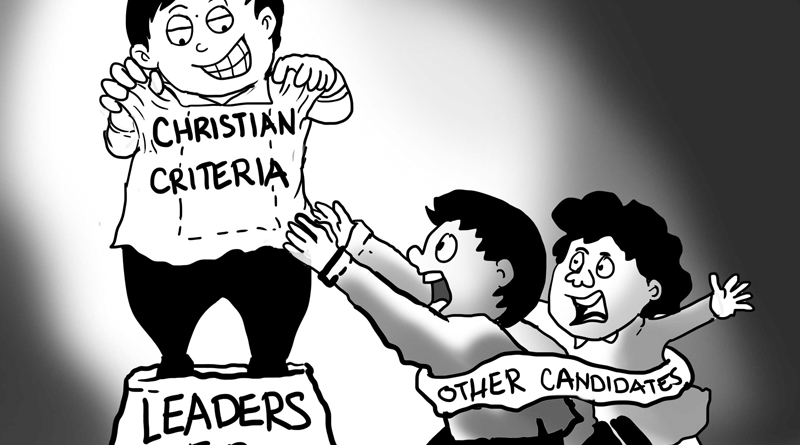 Exodus 18:21 Â “choose from among all the people competent menÂ who are God-fearing, honest and incorruptible to be their leaders.”

FOR THE FIRST TIME,Â Â lay Catholics, Christian and Evangelical faith-based groups have joined hands to guide an estimated 10 million voter-believers how to elect Â the right people to public office.

To be manned by a committee, the PMTL created a matrix based on the criteria of competence, leadership, fidelity to God and Neighbor, Truthfulness in Governance and character (Gabay Cristo), to grade the most qualified candidate for President, Vice President and eight Senators for the 2016 elections.Â  Later on, the criteria-prism will be trickled down to the province to guide the rural folks to elect the best governor, congressman and mayor after the 2016 polls.

By October 5 and 6, a national convention of all members will be held inviting all the 10 selected candidates to present Â their platform of government. Â “The People’s Choice” Â will then be asked to sign a covenant to implement the group’s “Reform Agenda” based on a God-centered program to be executed Â by competent and committed servant leaders.

Is there a moral justification for Â the emergence of a “Christian vote”? Yes there is.

God, after all, is the source of all human authority. Therefore, public office Â must be used only for legitimate causes that empower people, Â and not Â just a few vested interests.Â  Sovereignty Â also resides in the people and at election, the people Â bestows a public trust on elected officials that must Â not to be betrayed.

Men of sterling character are needed to lead us-men who are Â willing to end their Â loyalty to one’s party where their Â loyalty to the country begins when their Â conviction does not jibe with the party’s ideals.Â  As Manuel L Quezon Â said we need men who ” can put his conviction to Â practice, profess it with faith and defend it with courage.”

Without being tutored , these leaders have already Â in their inner selves a “sense of moral order”- that they will only do what is for the national good, not Â just for family, industry or friendly interests.Â  Men who do programs out of a sense of Â sacred duty and not to bring attention to themselves in aid of election or reelection.

The days of the Sunday Christian Leader Â are over. They Â can no longer wear religion like Â Sunday clothes- to be kept under the closet for the rest of the week. Though tremendously improved, the Philippines is still tainted today Â by corruption and inequality Â -because there is Â still a “disconnect” in a largely Christian nation like ours between our Â leaders’ religion and their daily life behavior.

Pope Francis who was named after the patron of the poor and the downtrodden had the worst adjectives for corrupt men- an abomination “because they steal resources” from the poor.Â  The double standards Â of justice here Â (one for the rich, another for the poor) Â and inequality in wealth and opportunity have left behind many of the poor amid the glowing statistics of a rising GDP- the second highest in Asia.

Many of the poor Â have been prejudiced by Â today’s pervasive Â acts of nepotism, political accommodations, political dynastic behavior, business monopolists and oligarchs.

One looks around and can sense that the issue of corruption and inequality Â have been Â done in a massive and repetitive pattern signifying tremendous malicious premeditation.Â  Yet our Catholic catechism teachings have been explicit that to reconcile with God in Confession or act of Reconciliation , three requirements are necessary.

There must be repentance, restitution of what was stolen and then a firm resolution not to commit the same wrongdoing again.Â  Is this done?Â  This is another indication Â that the continued existence of corruption and favoritism reflects our own lack of seriousness and fidelity to religious teachings.

We are a people filled with rituals and prayers- but seldom do we walk the talk.

At the root of all these is the “love of money” since time immemorial. In the Holy Bible, One of Jesus ‘ Chosen Ones -Judas Escariot- betrayed his Master due to the lure of the glow of thirty pieces of dirty silver. In modern times, the betrayal of public trust through corruption and political patronage Â  is often fueled by an insatiable greed to maintain a high lifestyle or to prepare for the next election and keep oneself in power.

That is why- the Biodata is never enough. A Biodata showcases one’s talent. But the more important halo has to be “character” Â which is Â often a result of a fear of God translated into Â a virtue Â of Â integrity or “doing Â the right thing when no one else is looking.” -rightfully.

And people must Â be warned not be taken by propaganda and spin masters. Politicians are the masters in convincing oratory -to win votes and nothing else. People must discern and read between their lines and their linkages to Â certain parties that will disable him from walking the straight path due to cemented alliances and “utang na loob”.

Let us take one example of political double talk.Â  In his second inaugural address as president at the Rizal Park on Â December 30, 1969, the last sentence of president Ferdinand Marcos’ speech Â proudly said” “Then Â we prove to our posterity that our dream was true Â that even in this land of impoverished legacy, the wave of the future is not totalitarianism but democracy.”. Less than two years later- on September 21, 1971, Marcos declared Martial Law. Words are hollow.

So, when Â people use this matrix to grade the candidate’s legitimacy to public office, we must have implicit faith in the people that they will Â vote according to their conscience based on these criteria.Â  Let us not forget that the greatest Franchise of Filipinos – the People Power of EDSA I – was not hatched inside board rooms.Â  It was the small folks – who carried the nation’s will to victory at EDSA and the nation became a darling of the whole world.

But is this Rating System not against the universal principle of the separation of the Church and the State? It is not. In his letter to the the Movement, CBCP head Archbishop Socrates Villegas clarified that the winner of the rating system does not mean Â he/she is the candidate of the Catholic Church or any church for that matter.

It is a Â Christian laymen’s initiative to do a “Voter’s Education” with the view of honoring men and women who have the best chance to transforming the nation into one with dignity and with Â inclusive growth for all.

Let us all welcome this initiative and vote according to our conscience.