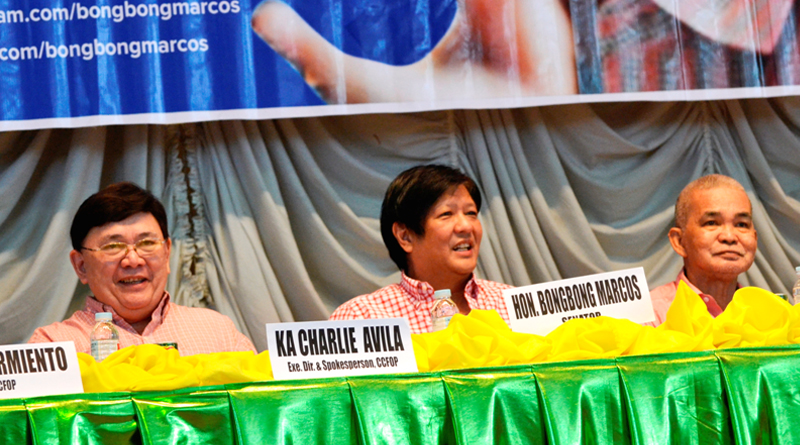 The Confederation of Coconut Farmers Organizations of the Philippines (CCFOP) has urged the Commission on Audit (COA) â€œto audit the funds that were transferred to the Bureau of Treasury (BTr).â€

The demand contained in a manifesto signed by its leaders also urged the Presidential Commission on Good Government (PCGG) to release in various national newspapers the list of coco levy assets.

It also urged the â€œaccountability of the government officials in the illegal transfer of the Php56 billion coco levy funds to the BTr.â€

This came during the Visyas area consultation and forum held Friday at Bohol Cultural Center with guest Senator Ferdinand â€œBongbongâ€ Marcos. Some 700 farmers coming from regions 6, 7 and 8 in the Visayas cluster came in droves to attend the said consultation to make their demand that the illegal transfer of coco levy fund to national treasury heard, Jun Ordinario, federation president of the Small Coconut Farmers Organization of Bohol, said in exclusive interview.

CCFOP said that despite the recent victory in the Supreme Courtâ€™s issuance of the temporary restraining order (TRO) against government officials, including President Benigno S. Aquino, in the said illegal transfer of coco levy funds, it also demanded for the government â€œto appoint coconut farmers to the board of directors of the Philippine Coconut Authority (PCA) as mandated by law and that PCA be detached from the office of the Presidential Assistant on Food Security and Agricultural Modernization (OPAFSAM),â€ formerly headed by Sec. Kiko Pangilinan.

â€œWe have to remain vigilant and continue our struggle for the proper usage of the funds by its intended benenficiaries, the coconut farmers and for the development of the coconut industry,â€ CCFOP said.

CCFOP expressed lament that the Aquino government has allegedly dishonored the the High Courtâ€™s decision that the coco levy fund is a government-owned for the coco farmers welfare and development of the industry when it issued two executive orders, EOs 179 and 1290, on inventory and privatization and on reconveyance and utilization, respectively.

â€œThese Eos would have caused a new plunder of the funds had we not been quick enough to file a Prohibition Under Rule 65 qith Application for Issuance of Injuntive Writs,â€ asking the Court â€œto order the government to desist from emplementing the assailed EOs.â€ Thus the issuance of the TRO, CCFOP said.

Meanwhile, Officer-in-charge Jun Lago of the regional office of the Philippine Coconut Authority (PCA) earlier said in interview last night that the coconut levy fund which is now under custody of the national government remained unused to benefit of the coco farmers.

Â He said that though the money is there but no clear cut policies yet how to utilize it for the benefit of the said farmers. But he said he is hopeful the fund would soon be help the farmers. He gave no other details.

The fund is there already but as to how to manage it creates a gridlock and a lot of sectors wanted to do it, Philippine Coconut Authority (PCA) here said. It did not name who or what these sectors or entities who wanted to manage the recovered coco levy fund.

PCA said that it wanted to be the sole agency to handle the funds so that it could program them for the benefit of millions of coco farmers in the country. PCA said that it would just wait for the decision of the higher ups what to do with the fund.

PCA said that prices of copra are good in this season with â€œresicadaâ€ pegged at Php28.75/kilo while â€œpasaâ€ at Php21.75/kilo.

But only some 87,000 farmers registered with the agency. The rest remain unregistered, it said. And itâ€™s urging those unregistered to visit PCA office in Tagbilaran City.

PCA is still providing coco seedlings for replacement for those already old trees. Sixty-year old trees are not anymore bearing fruits and should be cut for lumber purposes, it said. The agency maintains a three-hectare of seedling nursery in Loay and another 150 hectares in Ubay town, PCA said.

Production of the coconuts is placed at 90-95 nuts per /tree/year average if fully fertilized. Those trees that are not fertilized produced only some 35 nuts/tree/year. A kilo of copra is produced from four nuts. (rvo)