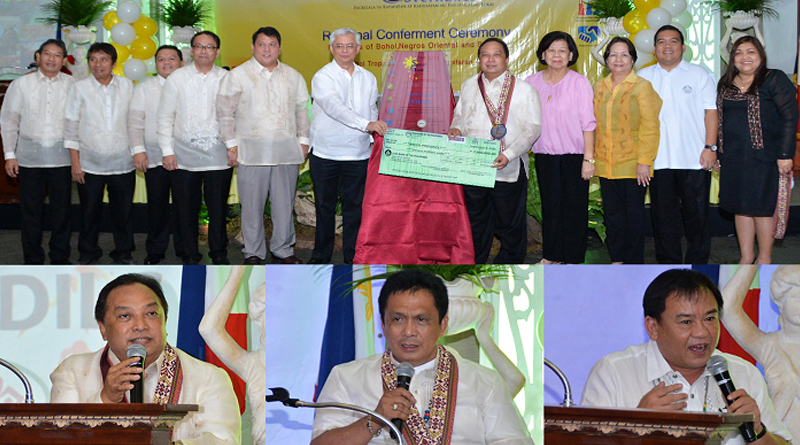 Bohol has been conferred the Department of Interior and Local Government (DILG) Seal of Good Local Governance (SGLG) in milestone testament to the province as a leading learning center for best local practices in the country.

Of the 27 seal recipients in the region this year, 10 are Bohol local government units (LGUs) topped Â by the provincial government under Gov. Edgar Chatto and Vice Gov. Concepcion Lim.

The nine other Bohol winners are all municipal LGUs, making the province Central Visayasâ€™ most-awarded, followed by Negros Oriental with seven and Siquijor with three while Cebu has none.

The 2015 SGLG edition evaluation of all LGUs in Region 7 provinces still considered Negros Oriental although it is now separated into the new Negros Island Region (NIR) along with Negros Occidental.

DILG Usec. for Local Government Austere Panadero presided the regional conferment of honors at Bohol Tropics here on Wednesday in a highlight coincidence with the 24thÂ Anniversary of the Local Government Code this month.

Gov. Roel Degamo of Negros Oriental and Gov. Zaldy Villa of Siquijor led the officials of the awardee LGUs of their respective provinces in receiving the awards.

The SGLG has six indicators that determine the fitness of an LGU to capture the seal and get a symbolic glass marker, a medallion and a financial incentive of P7 million, in the case of the provincial government, from the national DILG Performance Challenge Fund (PCF).

As topped by the provincial government, the other Bohol awardees are the LGUs of Alicia, Danao, Loboc, Loon, Maribojoc, Panglao, San Miguel, Sierra-Bullones and Talibon, each also getting a seal glass marker, a medallion and a P3-million incentive.

An SGLG awardee city LGU gets P5 million and, like the rest of the other LGU winners, is also entitled to access to other national performance-based incentive programs.

This year, only the cities of Bais and Dumaguete in Negros Oriental have been granted the seal, which also symbolizes commitment and competence.

Bohol under the leadership of Chatto has emerged as one of the countryâ€™s leading learning centers for best practices in local governance, according to Panadero.

Assisted by the Australian government in partnership with the DILG and provincial government, Boholâ€™s piloting of the PRMF Â (road management) has trail-blazed meaningful reforms in several areas of governance.

Boholâ€™s road management reform under the PRMF has, in fact, provided the template for an unprecedented national incentive for local roads management program, which pioneering implementation in 2016 carries a P6.5-billion allocation.

Also known as the KALSADA Program, the nationalized local incentive is the latest national policy drawn from Bohol experience and strongly endorsed and successfully lobbied for by the governorsâ€™ league as championed by Chatto himself.

Chatto is the national secretary-general of the League of Provinces of the Philippines (LPP), which also pushed for a bigger budget for the bottom-up budgeting or BUB that Panadero said would have half of its over P24 billion allocation in 2016 directly downloaded to the LGUs.

Panadero cited the seal as a fitting reward to the effort for transformation as he bore Â witness to the achievement of Bohol under Chatto when it topped among the â€œbest governed provincesâ€ in the country in 2010 and 2011.

This was based on DILGâ€™s consecutive year assessments that put Bohol in the lead of the local Governance Performance Management System (LGPMS).

In three more consecutive years from 2012 to 2014, the DILG conferred the Bohol province the Seal of Good Housekeeping (SGH) until bestowing ultimately this year the SGLG.

After the successful run of the SGH since 2010, the DILG launched the SGLG last year to provide greater challenges so that local government could keep good governance and serve much better.

As SGLGâ€™s predecessor, the SGH only scaled the degree of compliance to the departmentâ€™s full disclosure policy, particularly in the areas of budget, revenues and procurement, among others, while acting on auditing guides and meeting the requirements of the Anti-Red Tape Act, which Chatto had himself co-authored while in Congress.

Thru the SGLG, the DILG aims for a condition in which LGUs do not only sustain the practice of accountability and transparency (good financial housekeeping).

The LGUs are likewise to be able to prepare for challenges posed by disasters (disaster preparedness) and sensitive to the needs of the vulnerable and marginalized sectors (social protection).

Further, the SGLG drives LGUs to encourage investment and employment (business-friendliness and competitiveness) and safeguard the integrity of the environment (environmental management).

To get an SGLG, an LGU needs to pass all the three core assessment areas—good financial housekeeping, social protection and disaster preparedness—and at least one of the essential areas involving business-friendliness and competitiveness, environmental management or peace and order.

The Bohol police reported in the Provincial Peace and Order Council (PPOC) meeting on Tuesday the reduction in both index and non-index crimes.

In their award acceptance speeches, the three governors invoked the essence of the divine intervention to human governance and public service affairs.

Chatto even imparted his principle of â€œleadership (that) is a gift from God for man to develop and share with others.â€

The latest Bohol Poll, a public pulsing by the Holy Name University Research Center, showed that the Boholanos gave Chatto a +88 satsifaction rating, reputed to be the highest to a sitting Bohol governor in history.

The Negros governor chanced to tell how he has also been so proud of being a Boholano as he traced his fatherâ€™s roots to Clarin town.

Villa received the award for Siquijor province and Mayor Meynard Asok and Mayor Mei ling Quezon for the awards for the towns of Maria and Siquijor, respectively.

Chatto thanked the DILG for the LGU performance incentive program which was begun by the late Sec. Jesse Robredo, enhanced by former Sec. Mar Roxas, now the announced Liberal Party presidential bet, and has been sustained by new Sec. Mel Sarmiento.

Panadero and Chatto agreed that the good governance seal not just recognizes the capacity of the local chief executive but the work of the entire LGU pursuant to the principle of shared leadership.

Any honor or distinction is just a consequence because, first and foremost, people in government are mandated to serve and get more responsive to changes and challenges, Chatto said.Â (Ven rebo Arigo)