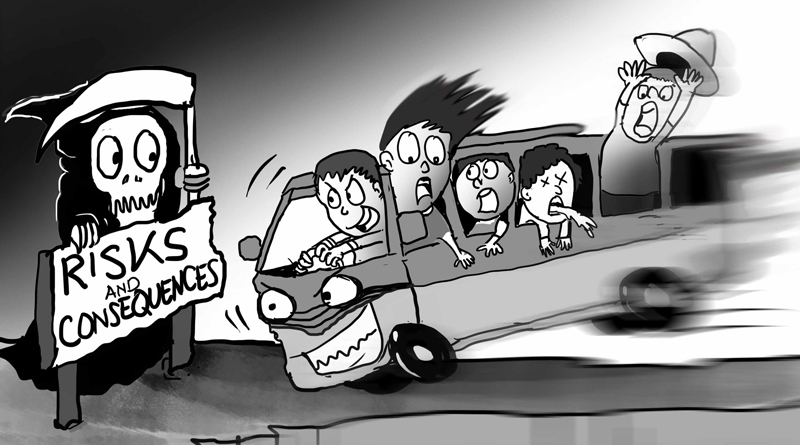 IN A SPACEÂ Â of a few months, three dead and 15 are injured in Bohol involving a bus company that has predominant role in public transportation in the Visayas, so says BM Abeleon Damalerio.

The company in question is the Southern Bus Transit, Inc. operating since 2012 with 166 buses in major routes, almost in monopolistic hegemony in the province that counts local and domestic tourists among its Â many patron-passengers. It has major presence in the Negros island, Panay, Leyte and Samar,as well.Â  It’s a big-time bus company.

But that’s no excuse to be sporting kid’s gloves in dealing with their errant drivers. By its own admission through Manager Noel Fuentes and borne by nationwide statistics 85% of bus accidents are caused by drivers and their poor judgments on the road and only 15% can be traced to mechanical reasons.

Since it’s human error, the big finger points at the Human Resources Department of the bus company- its weak monitoring system for driver fitness and company policy itself. A twice a year Â random drug test is too Â few as to be inutile and a random alcohol test inadequate for the drivers’ test Â of competency – upon whose hands the lives and limbs of many are at the mercy of.

The company admits the discovery of drug and alcohol use Â already among their ranks despite the paucity Â of monitoring Â and the peeved Â public is now aghast. Contrary to their wrong beliefs, drugs and alcohol are not Â always “uppers” against fatigue- they , in fact, many times cloud judgment, weaken motor faculties, slow muscle reflexes -which combined with human fatigue is a “lethal combination” indeed.

But, the main culprit behind these road accidents is the company’s policy of pushing their drivers to cover 300 maximum kilometers in their wake and employ a commission system based on volume of passengers and cargo make it –inevitably- axiomatic that the system would Â develop “speed freaks” drivers Â on the road. Accidents waiting for their time to happen.

All that means Â over-speeding, reckless overtaking, tail gating , abrupt maneuvers and beating traffic lights and pedestrian crossing lanes to chase the elusive peso to bring home to the missus – or other dearly beloveds as the cases may sometimes be.Â  That’s human nature- but dangerous to other humans.

We have always maintained our freedom to swing our elbows ends where the tip of our neighbor’s nose begins.

There are of course drivers who are borne to replicate their ” Fast and Furious” Â inclinations from birth-where they just get their highs – with or without drugs- from speeding their vehicles to Kingdom come;sometimes the heavens accommodate them. All the more reason a stricter psychological test must be done on bus drivers Â and unmask those who Â cause the production of fake drug tests for driver applicants at the LTO at the price likened to Â Judas Iscariot’s style, that will result in quite another problem. They could become the Â drug-dependent private vehicle Â drivers who Â can ram Â into buses themselves. That aside.

The riding public has the right to travel and the right to go home in one piece and not to be printed prematurely in this paper’s Obituary section. Bus companies have the responsibility to ensure those.

We sincerely hope that the bus company polices its ranks tighter and not bank on the fact that their Â suspension if warranted- would be hard for the LTFRB to do- since it will disrupt travel in general and hurt tourism goals in particular in this fabled resort island of Bohol.

Is there room for another major bus franchise for the province after Â getting a tremendous Â upgrade in tourist indices especially with the impending completion of the P7.2-B Bohol Panglao international airport? Just a thought. But not a passing one.

It is true that road accidents remain one of the main causes of non-disease related deaths in the country. For instance ,one has about a million to one more chance to die on the road rather than an airplane crash, contrary to some misguided belief.

In 2014 alone, there were Â 28 recorded bus accidents in the country causing 56 people to die and 483 to be injured. In Metro Manila, there is a daily report of bus accidents, all driver related but Â not counting those hostage taking by some wacko or the other who got jilted by their lovers.

But this gives more reason for bus companies to be more pro-active and “safety first before profit” as BM Tommy Abapo pointedly mentioned in the SP hearing.

Let them be reminded that a bus vehicle franchise is a privilege that carries with it grave responsibilities. The lucky franchisee is given full authority to serve exclusively certain territories and allowed a specific number of vehicles to the exclusion of all others.

The least they can do-in exchange for these- Â is maintain their buses to near perfection in condition and hire drivers that at least Â make the sign of the cross before they journey- and realize that out there in the passengers’ homes are family members who expect that at the day’s end -their families remain intact in number.

The Â transportation franchise should not result in the production of more orphans and widows in our midst.

Continuous violation Â by a bus company of the rules connotes Â utter disrespect for human lives and therefore Â necessitates the suspension or revocation of Â the license to operate a public vehicle company by the government.

That is only fair.