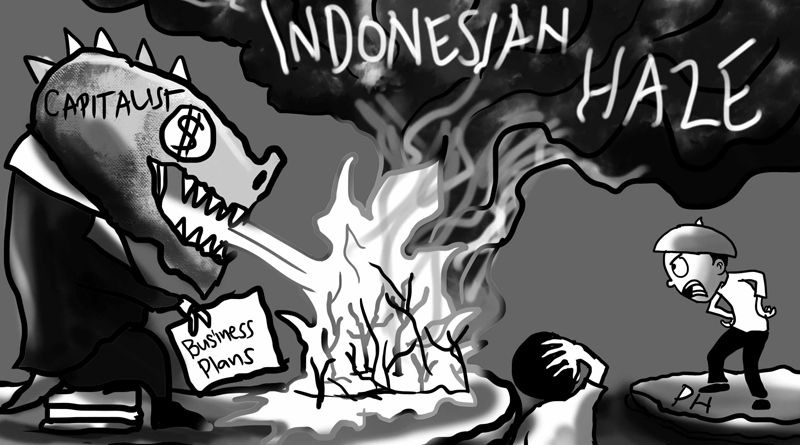 GENERAL ANTONIO LUNAÂ Â Â was quoted as saying “We- are our own worst enemies” in the film “Heneral Luna” though in a differently pointed perspective.

For instance, Â some 10 huge Â greedy corporations and 100 individuals in Indonesia Â are the suspects in the recent Â large scale burning of trees and land to give way to plantations for palm oil and pulp and paper products,

As a consequence- hectares of land continue to burn wholesale in Indonesia-with the capitalists not getting their dirty profits but Â instead are seeing in their very physical investments the semblance of the fires of Hell in the Bible and Dante’s Inferno.

The Â same is Â said to be the current Guinness world record holder of the worst haze in history- as seen by NASA, the authority on global atmosphere and could take three years to completely put off.

The haze has blanketed portions of Singapore, Malaysia, Cambodia, Vietnam, Thailand, Indonesia and the Philippines.Â  In fact, we are tempted to call it the ASEAN Integrated Wholesale Pollution, though that is not very funny.

To be sure, it has affected a huge part of Mindanao and belatedly Cebu, Bohol and Negros. Flights have been cancelled because the particles themselves found in the haze could damage plane engines and pilots are impeded in seeing the airstrips because they cannot completely rely on gadgets.

The usual howl of protests rang nationwide because flights from Manila themselves were Â also necessarily affected. Assuming full house capacity of 250 people on Â the Airbus, at 9 flights a day to and from Tagbilaran, that means 4,500 passengers are prejudiced in just one day’s time.

People in many parts of Â  the ASEAN are asked to wear face masks outdoors and many are facing grave threats of pneumonia, asthmatic attacks, skin and eye irritation.

The haze is denser than your ordinary fog- and worse, it does not bring the gentle breeze that fogs thankfully bring with them; they worsen the warmth of the atmosphere. It carries also with them an annoying smell coming from burnt land.

This annoyance is Â imported from neighboring Indonesia, whose officials are now scratching their heads and something else as to how to find a solution to this large scale environmental crime.

This results in a peatland burning that continues underground and can spring out in flames in other locations as well.Â  That is why Indonesia is now asking assistance from the USA, Russia, Canada and France for huge airplanes to dump more millions of liters of water over the area of vast conflagration.

Singapore has threatened to sue these 10 firms -but the problem is that Â  some of the investors of these firms are Â allegedly from both Singapore and Malaysia, two of the hardest hit nations by the maze. They call that “karma” in this part of the world.

Fighting off the stormy “Lando” Â in the north and The Haze in the south proved too much for the Â country’s DENR and PAGASA who are now clueless about this newfangled intruder called The Haze-and as of this writing, has lost its power of speech , in issuing bulletins to the suffering public.

In the meantime- there is chaos everywhere as provinces mostly dependent on air travel have been paralyzed . What about the Department of Health- does it have to wait for a plague of respiratory diseases before it mandates people to wear masks?

We understand that The Haze also contains dangerous particles which can cascade down to our fields , lakes and seas if massive cloud-seeding is made a national policy. Where is the Department of Agriculture?

Or is the entire government institution already Â presently and Â insanely engaged in the Biggest Circus in town called Philippines Elections and Partisan Politics?

The Haze is a result of the slash and burn Â type ofÂ Â kaingin Â thatÂ Â Filipinos Â also do albeit in a smaller scale.Â  It is the least expensive way to clear the ground Â because the greedy capitalists want to quickly Â harvest their oil and make their first batch of reams of paper from the new plantation.

Now that their intended plantations are burning fiercely , they must be reminded of Hell here on earth. Enough of theories of retribution.

Let us once again be reminded that we are in today’s Â Era of great Climate Change.

And everything we do -to our forests and lands- when done without mercy and conscience will come back to us Â negatively a hundredfold with Nature expressing her wrathÂ in all its fury.

Let us be reminded once again that “no man is an island”- and whatever we do in this world, somehow, somewhere affects the lives of someone ,sometime out there.

The Indonesian Haze is proof of global connectivity. All the more reason for all of us Â to “make haste slowly” especially if Â our businesses happen to tamper with the environment.

Here is one equation that should convince all of us that the Environment kills. The destruction of Ondoy and Pepeng, according to senator Loren Legarda, chairman of Climate Change in the senate represented about 2.7% of the value of Â nation’s GDP (Gross Domestic Product) and the Yolanda wrath represented 5% of GDP.

Combined , they could have wiped out the Â annual contribution of the entire Tourism industry, the country’s third largest dollar earner, to the nation’s GDP which is a high of 8%.of GDP.

We are Â only just talking here of actual damage inflicted and excludes the billions needed for rehabilitation. Think Â hard about it, ladies and gentlemen.