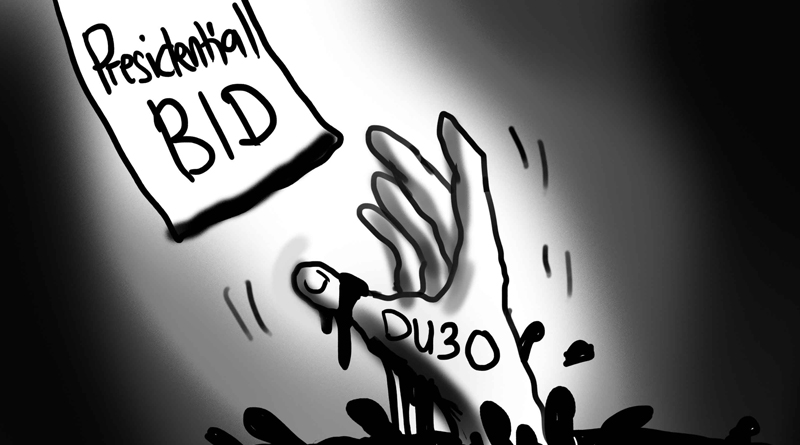 THE STORY IS TOLDÂ Â of a man confessing to a priest .

“I am single ,Father, but I have committed- many times- Â fornication and adultery with married women. I have seven girlfriends , Father, and we do it inside the car, on the beach, under a restaurant table and even under the acacia tree…”, the 20-something youth said.

The Father-Confessor just said: “You are not confessing, my Son you are bragging.”

But such is not the case of feisty Davao City mayor Rody Duterte when he announced his presidential candidacy in Taguig City on Bonifacio Day, November 30.

Duterte, who is 70 years old Â publicly claimed he has two wives and two girlfriends- and makes do through Viagra ( a sex potency inducing drug). Â He also admitted “I have killed a few”- Â to obtain the impeccable peace and order obtaining in his city today.

The admitted crimes- murder and bigamy- are serious crimes against the Constitution, Public moralists claim, even as a lawyer, that should cause his disbarment- even on the grounds of immorality alone.

Duterte, a former fiscal, dared anyone to come up with evidence on the “murders” and he will face them in court. He chastises DOJ secretary Leila de Lima for castigating him for human rights violations.

LP vice presidential candidate Leni Robredo countered that they were able to achieve the same progress in Naga City without resorting to the extra-judicial means of the Davao City mayor. Leni is also a lawyer by profession.

Duterte came out lamely that the Senate Electoral Tribunal exonerating presidential bet Â senator Grace Poe on charges of naturalized citizenship and non-residency was the reason he decided to finally run for president. “I cannot accept an American president. They have mangled the Constitution” while his foes count the times he himself appeared to have broken the same Constitution.

In Paris, president Noynoy Aquino waRned compatriots there about a candidate “who wants to kill many people.” Former representative Walden Bello likened Duterete’s bid as “the second coming of the Marcos regime when it comes to human rights violations”.

Thousands, died, disappeared or were tortured in Marcos’ Martial Law.

Three months earlier ,former senator Rene Saguisag told theÂ ChronicleÂ Â that their group of human rights lawyers were ambivalent with candidate VP Jojo Binay, also a staunch human rights lawyer but who has been accused of plunder. Â “Our real problem really lies when only Â Duterte and a Marcos” are our only choices left for president.”

But the popularity of Duterte appears to be among those who have seen the breakdown of law and order in the country and they seeing theÂ inability of the legit authorities and the justice system to bring the criminals to the bar of justice.

There are, of course, the same number of who are afraid that this shortcut to justice could later on lead to impunity Â and “arbitrary rule which can be worse than what exists now.” Of course on the edge of their seats Â are drug, gambling lords, smugglers and other criminals. As well as the status quo players – the corrupt government officials and the private sector collaborators who bribe them. They are scared of Rody.

The other problem is theÂ personaÂ that Duterte presents with his speech flowered by many garlands of expletives (pamalikas)Â that Â might sound good in drinking sessions and in barber shops quorum -but can he be that way as president representing the Republic? He could declare “War” on China once he is agitated, some fear.

There are those who brand the bombastic mayor as a “leftist in disguise” because he said he will convince communist exiled leader (his former teacher) Jose Maria Sison and MNLF hothead Nur Misuari to come out in the open and dialogue with him. Is that leftist enough?

Mayor Rody Duterte, the colorful one, can be considered as a non conventional candidate. People now compare him to Donald Trump who is leading the Republican race in America today. Trump is smart- who will say something controversial just to put himself in the limelight. Bad news is better than no news for him.

However, for Â 80 million Catholics -and especially the deeply religious Boholanos today- Mayor Duterte may have crossed the line that Â because of the monumental traffic he caused – which inconvenienced the visiting mayor in Manila- Duterte cursed the Pope, like a street vandal.

Of course, the CBCP through its head Archbishop Socrates Villegas minced Â back no words: Devil has many faces. Murder is a sin no matter what the intention. Adultery is a sin that cheapens marriage and victimizes children and the weak, Vulgarity Â is beastly and barbaric.” Â We need leaders who lead by example.

At the outset, the mayor was ballistic saying “he will ask for other church support if the Catholic church does not want him”. He also gave the name of a late Jesuit priest Fr Mark Farley as having molested him and other young boys as high school teeners at the Ateneo.

Lately, however, he seemed to have sobered up and apologized to Catholics through Davao Archbishop Romulo Valles and Â promised that he will fine himself P1,000 every time he says an expletive -to the Davao Caritas, a charity institution. Duterte also hinted at withdrawing from the race if the Catholic hierarchy demands that of him.

Every one,of course, Â has his own Road to Damascus-and gets stricken by lightning and mends his ways.

For his own good, therefore, Mayor Duterte despite his good intentions, must Â also mend his public ways. This is now the national arena, Mayor, if he doesn’t mind- not theÂ sabunganÂ in Davao.