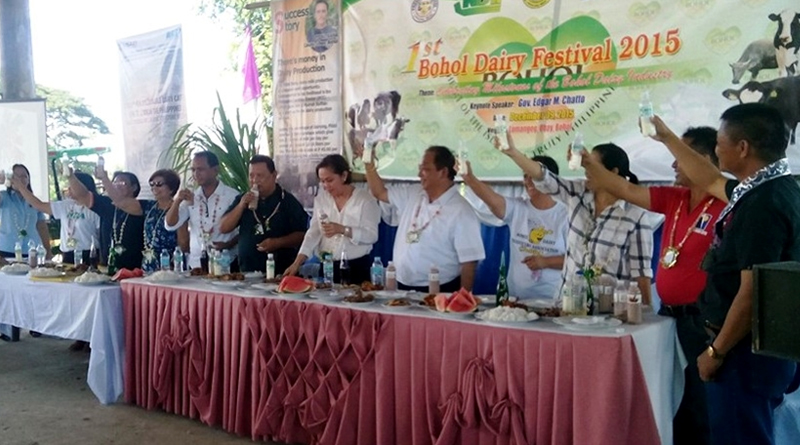 EXCITEMENT FILLED THE AIR in Lomangog, Ubay Wednesday during the grand celebration of the first ever Bohol Dairy Festival.

Themed â€œCelebrating Milestones of the Bohol Dairy Industry,â€ the event signaled the provinceâ€™s great feat in being able to produce its first 1,000 liters of milk, 500 liters each from dairy cattle and dairy carabaos, prompting Dr. Sales to later lead a Milk Toast among the crowd.

Gov. Chatto proudly admitted that this is a â€œrealization of a long dream of putting everybody together in one boat wherein industries are in harmony with one another and with environment protection.â€

â€œThis is also to celebrate the strong partnerships created between and among the people of Ubay and its partner LGUs and different associations,â€ Dr. Caro added, consequently admitting that â€œwe are now on our journey to our next 1,000 liters of milk.â€

Several carabaos were distributed to beneficiary farmers during the celebration whose money value, including those disseminated since the start of the program, has already reached P150M.

Bohol is now aiming to be the Milk Capital of Visayas, if not of the entire country, and this could never be far with the province having the biggest milk processing facility in the region.

The Office of the Provincial Veterinarian is now into its information caravan and milk campaign through the social mobilization of its milk program and is even simultaneously conducting a milk value chain analysis.

It is also into the adoption of a unified health program by giving trainings to Barangay Livestock Aides (BALA)Â and health technicians.

Thirty schools in the province, through the DepEd, are now into the Gatas sa Eskwelahan, supporting the Provincial Governmentâ€™s milk program, making medical doctors more than happy, especially pediatricians.

This is also in clear support of the Chatto-Lim Administrationâ€™s HEAT IT Bohol Program, with the Health of the Boholanos being on its prime agenda.

Gov. Chatto believes in the â€œpotential of the milk industry and that it dovetails on others,â€ generating income and increasing livelihood opportunities for the people.

Dr. Lapiz narrated how the governor instructed her to draft a memo urging hotels, resorts, restaurants and similar establishments to serve native Boholano beverages using native ingredients as welcome drinks to their guests.

â€œGov. Chatto gave our office a directive to push for green economies and to choose industries and projects where Bohol has an edge, as in the field of tourism,â€ Dr. Lapiz told the huge crowd.

Bohol is now undeniably a well-known world-class tourist destination and the Provincial Leadership aims to take advantage of this â€œedgeâ€ as compared to other provinces.

Just in Ubay, its local leadership is now bent on pushing the townâ€™s natural beauty to become coveted tourist stops.

For one, this would make one take-in and savor the breath-taking beauty of the pristine meadows of Cambugsay.

The milk program is now focusing its energy on the cross-breeding of Siquijor native cattle, Jersey cattle and Australian red, what farmers are referring to as â€œSiqseyred,â€ which could be proudly called â€œour very own.â€(JLV/PGBh/EDCom)