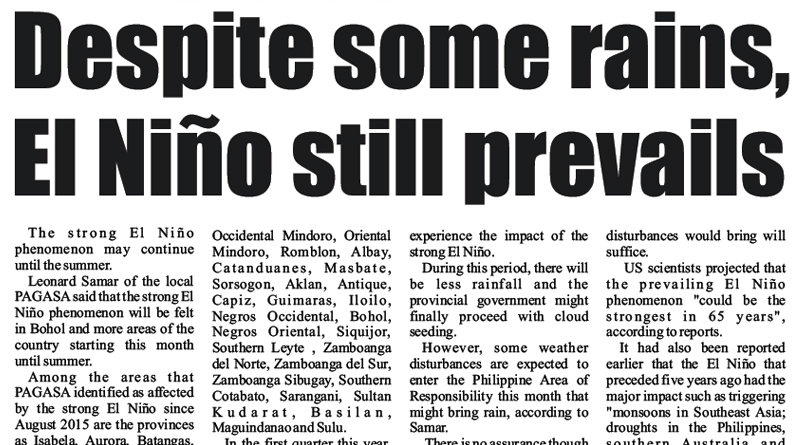 TheÂ strongÂ El NiÃ±o phenomenon may continue until the summer.

Leonard Samar of the local PAGASA said that the strong El NiÃ±o phenomenon will be felt in Bohol and more areas of the country starting this month until summer.

In the first quarter this year, these areas will continue to experience the impact of the strong El NiÃ±o.

During this period, there will be less rainfall and the provincial government might finally proceed with cloud seeding.

However, some weather disturbances are expected to enter theÂ Philippine Area of Responsibility this month that might bring rain, according to Samar.

There is no assurance though that the rainfall the weather disturbances would bring will suffice.

US scientists projected that the prevailing El NiÃ±o phenomenon “could be the strongest in 65 years”, according to reports.

It had also been reported earlier that the El NiÃ±o that preceded five years ago had the major impact such asÂ triggering “monsoons in Southeast Asia; droughts in the Philippines, southern Australia and Ecuador; blizzards in the United States; heatwaves in Brazil; and killer floods in Mexico”.

At first, PAGASA estimated the strong El NiÃ±o in 2015 to last only from August to November, but it continued until the following month and is expected to extend up to first half of this year.

In the early part of 2015, it started as a weak El NiÃ±o, but it intensified to “moderate” by August and further to a “strong” El NiÃ±o.

It might “gradually weaken” in the coming months though, according to PAGASA.

In the event of an El NiÃ±o phenomenon, there is “warming in sea surface temperatures in the equatorial Pacific, and can cause unusually heavy rains in some parts of the world and drought elsewhere”.

The US scientists found out that the “averageÂ sea surface temperatures in a key part of the equatorial Pacific ‘could potentially reach or even exceed two degrees Celsius above normal, which is 3.6 degrees Fahrenheit above normal’ which had been recorded only ‘three times in the last 65 years’, â€ according to reports.