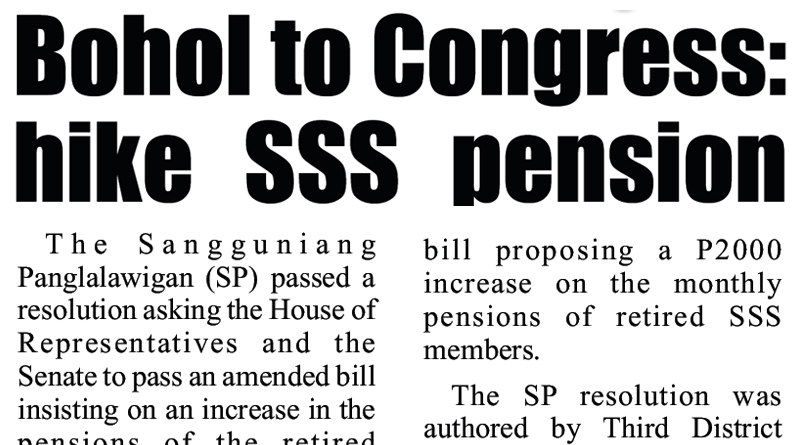 The Sangguniang Panglalawigan (SP) passed a resolution asking the House of Representatives and the Senate to pass an amended bill insisting on an increase in the pensions of the retired members of the Social Security System.

Any amount will do, if P2,000 is too much for the Social Security System (SSS), according to SP Member Elpidio Jala.

During the SP regular session on Friday, Jala,Â who is himself an SSS pensioner,Â Â moved for the passage of â€œa resolution requesting both the House and the Senate to file an amended bill reducing the proposed increase from P2000 to P1000 increase or any amount affordable by SSS, subject to styleâ€.

This came after President Benigno Aquino III vetoed the bill proposing a P2000 increase on the monthly pensions of retired SSS members.

The SP resolution was authored by Third District Board Member Elpidio Jala,

The Sangguniang Panlalawigan had earlier passed a resolution supporting House Bill 5842 that proposed the increase of SSS pensions.

â€œIt may be recalled that this body passed a resolution supporting House Bill 5842 or the proposed law mandating the across-the-board increase to promote the well-being of the countryâ€™s private sector retirees. Indeed, it was approved in the House and Senate, but President Aquino vetoed it,â€ according to Jala.

ThroughÂ HB 5842, Congress sought to amend Section 12 of Republic Act 1661 or the Social Security System Act of 1997, to facilitate the P2,000 across-the-board increase on the monthly pensions of SSS retirees.

For his part, Bohol Senior Citizens Federated president Melchor Daniel expressed disappointment on the Presidentâ€™s veto on the bill proposing the increase.

Raising the monthly pensions of retired SSS members could have been a big help to the senior citizens in Bohol, Daniel added.

This is considering that prices of commodities and medicines, which the senior citizens have to face, continue to increase and the standard of living is getting high, according to Daniel.

He said the average monthly pensions that the retired SSS members in Bohol receive is just barely over P1,000 which is too low to meet the needs of senior citizens.

In a press conference in Manila on January 14,Â Presidential Communications Operations Office Secretary Herminio Coloma Jr. explained that SSS finances would be drained by 2029 if the monthly pensions of retired members would be raised by P2,000, based on the figures in the record.

In the veto message, the President explained that â€œwhile the proposed law mandating the across-the-board increase would promote the well-being of the countryâ€™s private sector retirees, â€˜we cannot support the bill in its present form because of its dire financial consequencesâ€™, according to reports.

The President believes that SSS would incur â€œsubstantial negative incomeâ€ if the increase would be implemented.

â€œThe proposed hike per retiree multiplied by the present 2.15 million pensioners would result in a total payout of P56 billion annually,â€ according to reports quoting the Presidentâ€™s stand.

However, the Presidentâ€™s stand drew negative comments from Boholanos in the social media, citing that the SSS should strive to improve its investment strategies and reduce expenditures to be able to increase the ultimate purpose of securing the members during their retirement years.