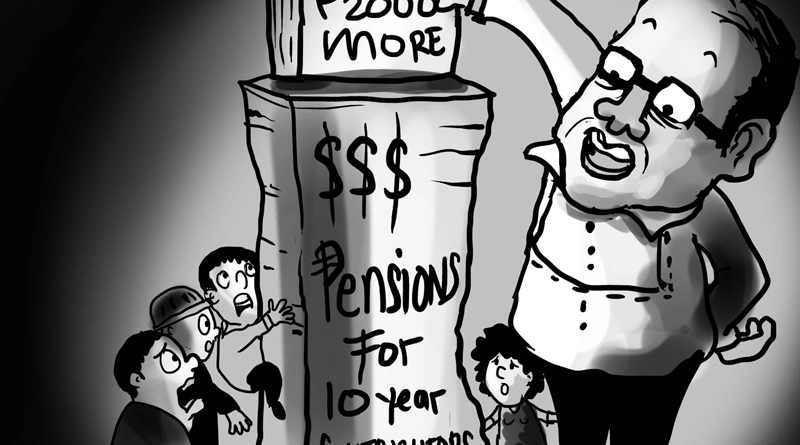 PRESIDENT NOYNOY AQUINO STEPPEDÂ Â Â onÂ  a hornet’s nest when he vetoed a P2,000 increase in the SSS monthly pensions for those with 10-year contributions. This disturbanceÂ  was confirmed by the deluge of negative comments received by ourÂ  twin media of radio and newspaper.

The social scientists sayÂ  that the government hasÂ  a larger responsibility over those who have less in life : the elderly and the kids because they have the lowest means to cope with the vagaries of life.

SSS pensioners number about 2.1 million in the country -and growing with the improving average longevity of the Filipino today.

President Noy justified his veto saying that this increase will result in an SSS Fund operating deficit of P26-B per year and since that deficit will be refilled by the Investment Reserves of SSS- in 11 years that reserve shall have been depleted , reportedly threatening the welfare of the current 31 million paying SSS members.

This could result -presumably- in the bankruptcy of the SSS as an insurance body.

We totally disagree,Â  we beg your pardon Mr. President.

Pensions received monthly have not changed since 1997 and inflation rate has hiked 200% from that year to now. Meaning net of inflation, the pension can hardly buy anything today based on 1997 prices.

And many of the pensioners areÂ  either sick or are on expensive maintenance medicine.Â  The pension received does not, therefore, serve to alleviate the plight of the elderly.

The Government appears to proceed in their computationÂ  from the assumptions of static , non- changing facts. But there are two ways of increasing the Investment Reserve: increase income and curtail expenses.

To stay above inflation, Government should increase annual contributions of healthy members from 5% and above. On top ofÂ  that- we know population grows by 2%Â  p.a. and weÂ  can therefore assign that percentage as annual average increase in new SSS members.

SSS Managers can improve its portfolio management results by taking an objective view on investments based on mereÂ  profit and liquidity. Let us recall that among the issues raised against a former president was his illicitly influencing the sale and purchase of certain stocks to favor insider traders and himselfÂ  and not the Fund itself.

It can helpÂ  to maintain the Reserve if the government reducesÂ  the millions of bonusesÂ  given to SSS officers and directors,Â  which even when legal, is morally wrong relative to the SSS contributors and pensioners.

Why let the poor aging pensioners suffer instead?

We thinkÂ  that the healthy SSS contributors will not raise a howl in the 5% increase in monthly contributions every year since eventually they themselvesÂ  will become the ultimate beneficiaries in their old age as future pensioners.

Moreover, the SSS will never go bankrupt because the Constitution will not allow it.Â  Republic Act 8282Â  Section 21Â Â  provides that the Philippine Government guarantees the benefitsÂ  due to SSS members and the solvency of SSS itself- or words to that effect.

Besides, when Congress passed the P2,000 (eventually vetoed by the president) pensionÂ  increase for this year, it had already provided for it in the 2016 budget because government cannot spend anything not appropriated by Congress.Â  So the deficit has been provided for.

Finally, what anyhowÂ  is P 56-Billion as a percentage of the P3-Trillion GAA (National Budget)? A miniscule percentage.

Besides, former senator Ping Lacson claims there is a P500-B savings in the national budget -waiting to be sidetracked to approved but unfunded projects of the government’s favorites senators , congressmen and their fair-haired contractors.

Consider that theÂ  P56-B is only about 10% of that P500-B, something that will certainly benefit the elderly immediatelyÂ  and not beÂ  squirreled away by kickbacks and commission from the use of the Savings.

According to some netizens, this brazen act of denying the pension increase through the president’s veto could mean the kiss of death for many LP members. chiefly presidential bet Mar Roxas. No, we would not go to that narrowly analyzed extent.

The president’s allies in Congress willÂ  probably not override the veto of the president and embarrass the chief executive.Â  But will they move for a compromise of P500 or P1,000 increase instead of P2,000?

The Palace proudly blew its horn that at least we have a president- in vetoing the bill -Â  who had shown thatÂ  he will decide on matters even if they are unpopular.

But this is not a case ofÂ  a popularity contest.It is playing with the lives of many who are probably in the last chapters of their lives whenÂ  moneyÂ  is available which could just end up the hands of scoundrels which we know many public officials and their conniving private sector crooks have become.

Enough. Let us raise the pension of the SSS elderly members. Now.