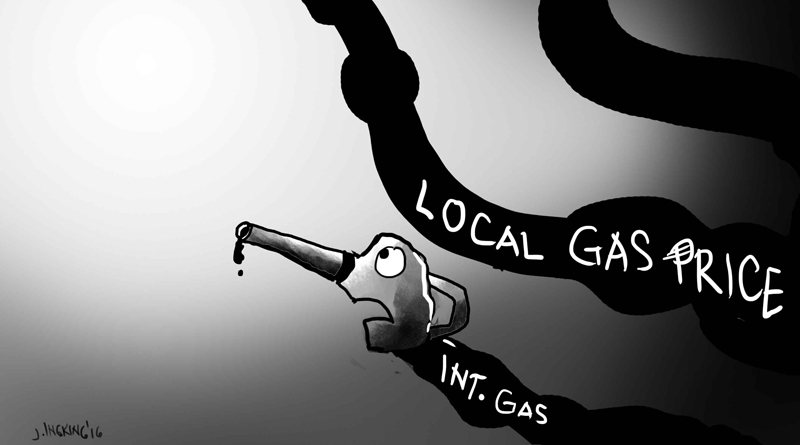 IT IS IN THE BEST INTERESTÂ Â of public welfare that we all be educated on the issue of gas to bring the public debate to a higher plane.

For instance, world prices of crude oil dropped to US$33/a barrel- a descending trend- that transport operators like buses and jeepneys in Manila voluntarily reduced fares to P7.00 recently.

The declining trend is so pervasive that even the Bureau of Customs is worried that the bureau Â will show less collections now since the country imports most of its oil from abroad. Saudi Arabia has refused to reduced its output and Iran has just been welcomed back to the world oil supply market-indicating low crude oil price for a long time.

Oil prices are so low that Venezuela and Russia, major oil producers, are facing a bleak economic outlook for the year.

The Philippine government, on the other hand, Â is indirectly subsidizing the prices of gas because its 22% tax on petro products (premium and unleaded) is lower than that in Â New Zealand, Cambodia, Hongkong, Thailand, Singapore Â while its 11% tax on diesel is only higher than that of Hongkong (0%) and Singapore (7%).

If world crude oil prices are down and national oil Â taxes low- why are there higher pump prices in gas stations in the provinces? And in Bohol, particularly, P 4 higher than other provinces?

First ,Cebu is the main base of Bohol gas sources. Cebu does not haveÂ refineriesÂ (all in Luzon) but only depots, unless the sources import directly from nearby Malaysia or elsewhere south of Mindanao. It takes about P 1 per liter to transport via barges and lorries from Cebu to Bohol but that does not explain the P 4 differential.

Second, the oil industry isÂ deregulated.Â It means the government, unlike in China,cannot dictate retail prices.Â  But a summit called then by Gov Edgar Chatto- in gentle persuasion- produced an immediate reduction of P 1-2 from gas stations. Which means they are Â already protected by an enormous layer of profit, logic dictates.

Lets define first the types of gas stations. Â BrandedÂ Â stations are either owned or exclusively licensed by the major players ,particularly the Big Three: Petron, Caltex and Shell.DumpingÂ is the act of branded stations buying from other suppliers who sell cheaper than the brand they carry. Petron’s Ramon Ang outlawed these and resulted in closure of some erring dealers.

WhiteÂ stations are those who can buy from any supplier- the cheapest getting their attention.Some people own both branded and white stations.

Many of the branded stations are given “fixed profits” by their patrons -in a sense limiting their profits.Â  They urged the white stations -who normally have lower-priced sources- to drop their prices since they enjoy high margins and promised Â that their branded stations will follow suit.

If the white stations do not budge- prices in the community remain the same. Thus the radio survey of popular dyRD program “Inyong Alagad” -88% of the people blamed the gas station owners for high prices and in effect asked them to “limit their greed”.

As truly ,for years now, Bohol has topped other nearby provinces in retail gas prices and thus capitalists had grown wealthy Â on the backs of the suffering public.

What has been missing in that equation are the facts that lower gas prices can enthuse people to travel more (as proven by scientific fact) and that the prices of everything from farm products to services will generally go down and benefit everybody.

A prosperous community prospers gas stations as well. More people will buy cars aside from those who will now travel more. As the saying goes: “What goes around ,comes around”.(Very hard to translate to Bisaya)

Never mind Â so much the rich folks who have two cars or more- they can hurdle that. But think about Â the lowly farmers who bring their Â produce to market, the tricycle/bus Â drivers and the poor passengers who do not own vehicles – they are hurt the most. The hard-up fisher folks who need gas just to go to sea, as well.

High cost of transport affects prices of all goods and services and Â eventually affects everyone including the gas operators. We should do something about it.

The City Hall has been asked to identify those gas stations willing to sell lower than prevailing pump station prices for the public to know Â them and be encouraged to be patronized. Secondly, the “White Knights”- those who want to gain entry into the province and sell reasonably lower Â gas station prices should be welcomed like friendly forces by government.

Or the current gas station players can skim a bit from their profit for after all Bohol has had this situation of high price differential for many years already.

The P1.2 million Boholanos who will all be directly and indirectly Â positively affected will be grateful to you for that.Â  Shall we? Can we? Do we?

Who knows- in doing that- public transport operators in Bohol-like Â buses. tricycle,jeeps, taxis and vans can Â also voluntarily reduce transport fees like in Manila- to the joy of the thousands of the riding public.