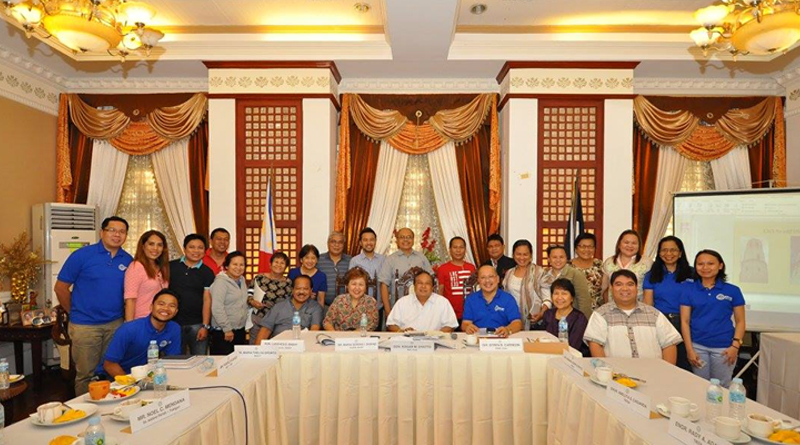 Gov. Edgar M. Chatto facilitating a committee meeting Â Wednesday at the Governorâ€™s Mansion for what they called a â€œproblem-solving session.â€

The RDC-RPMC met with representatives from the National Museum (NM) and the National Historical Commission of the Philippines (NHCP) to get updates on the reconstruction and restoration works of heritage churches in Bohol.

With the governor and Dir. Carreon were NCHP Chair Dir. Maria Serena I. Diokno, OIC Charlie Tantingco of the Bohol National Museum, representatives from the Tourism Infrastructure and Enterprise Zone Authority (TIEZA), National Commission for Culture and the Arts (NCCA), National Historical Institute (NHI), the Department of Budget and Management (DBM), Department of the Interior and Local Government (DILG), local government units (LGUs), national government agencies (NGAs), the tourism industry, the private sector and other stakeholders.

Also directed to attend were some personnel from the Office of the President-Presidential Management Staff (OP-PMS), key persons from the Bohol Provincial Planning and Development Office (PPDO), and representatives from the parishes in Bohol where on-going restoration of churches are located; such as Maribojoc, Loboc, Baclayon, Dauis, Loay, Tubigon, Loon and Tagbilaran City.

The governor acknowledged everyoneâ€™s presence as indicative of each agencyâ€™s desire to know of the latest developments and their strong support for this, â€œa very tall order and tireless endeavor to restore all that which had been destroyed by the havoc of 2013.â€

The RPMC is RDCâ€™s monitoring arm and is responsible for â€œoperationalizingâ€ the Regional Project Monitoring System (RPMES) in Central Visayas.

Among the projects being monitored by the RPMC are major Official Development Assistance (ODA)â€“funded projects, those funded under the Private-Public Partnership (PPP) scheme, local funds of NGAs, General Appropriations Act (GAA)-funded projects, as well as several rehabilitation projects of implementing agencies for disaster-stricken areas in the region.

Within the RPMC scope for monitoring in 2014 and 2015 are rehabilitation projects for areas affected by Typhoon Yolanda and the Bohol earthquake in 2013.

Among these projects is the National Heritage Reconstruction and Restoration Program (NHRRP) under the NCCA, with funding from the TIEZA, and the NM and NHCP as implementing entities.

In the span of two years after the two major disasters struck Central Visayas, the RPMC sought means to establish links with the implementing entities of the Program to obtain status reports, and subsequently monitor on site to obtain first-hand appreciation of the extent of progress on the restoration.

Considering the importance of the needed restoration works, the RPMC gathered all stakeholders to clarify issues, identify areas that need resolution, as well as recommendations to facilitate programs and project completion, as planned.

The status report generated by the RPMC Secretariat and reports on project site inspection conducted by the Regional Project Monitoring Team (RPMT) in November 2015 was presented, including issues and concerns generated from these activities.

The NCCA and TIEZA presented the institutional arrangements as well as funding flow and process, respectively.

The NM and NHCP, on the other hand, briefed the body on the status of their specific projects being implemented under the NHRRP.

Feedback from the parishes was encouraged, as well as recommendations, to speed up program implementation.

The National Museum has categorized the damages and restoration of projects in Bohol and Guiuan, Eastern Samar into three kinds.

Package 1 is tagged as Moderate/Serious where structures included are the Inang-angan Stairway in Loon, the Panglao and Punta Cruz Watch Towers and the Bohol Provincial Capitol, which includes the latterâ€™s restoration and conversion into the new National Museum-Tagbilaran and the associated improvement of Tagbilaran Plaza fronting St. Josephâ€™s Cathedral, consequently widening the street within that area.

Package 2 are those with Minimal Damages like those incurred in the churches of Panglao, Dimiao and Alburqurque.

Package 3 is solely for Guiuan Church in Eastern Samar which suffered Large-scale Damage.

The NHCP has ten projects in Bohol, among which are the churches of Baclayon, Dauis, Loay, Tubigon, Inabanga and Carmen.

Also included are the Pamilacan Watch Tower in Baclayon, the Rizal Monument and Plaza in Loon, two municipal buildings in Corella and the Baclayon Central Elementary School.

Situated in nine towns, an eleventh restoration project, a school, has been added this year upon the request of its local chief executive.

Dir. Diokno said NHCP heritage projects in Bohol are to restore historic structures, most of them churches and their ecclesiastical artifacts damaged by the October 2013 earthquake.

The NHCP needs to collaborate with concerned parishes, communities and LGUs for its restoration purposes, especially when it concerns movable objects.

NHCP, through its restoration projects, also aims to raise local awareness and appreciation of history and heritage conservation through activities and projects.

These could be done through stakeholder dialogues, creation of local jobs, training workshops, formal programs at senior high schools and university levels, and the establishment of a museum and conservation facility in Loay.

It also is planning to put up a conservation laboratory at the Bohol Island State University (BISU) in collaboration with the latterâ€™s school authorities.

Actual restoration in project sites commenced in 2015; except in three sites (Dauis, Baclayon and Loay Churches), which will start this year.

Dir. Diokno said their office has conducted training workshops on the conservation of ecclesiastical objects participated in by parishioners within project sites.

These trainings focused on the conservation of vestments, baptismal and other church decors, religious objects and paintings where participants were provided with tools and materials.

However, the Commission is concerned about the construction of temporary churches in Dauis and Tubigon, which were built without its knowledge.

She said that it is their officeâ€™s understanding that these are â€œtemporary structures while the churches are in the process of restoration, and that the former will be dismantled by the parishes once NHCP has completely restored the churches.â€

But as the Commission sees it, she added, â€œthis could create a huge problem for said temporary structures are made of concrete.â€

Gov. Chatto assured the Director that a meeting of those concerned would be called by his office so matters could be appropriately discussed.

â€œNHCP plans to completely restore at least one church in Bohol to be inaugurated by Pres. Benigno S. Aquino III before he steps down from office,â€ a positively hopeful Dir. Diokno informed Gov. Chatto.Â (JLV/PGBh/EDCom)