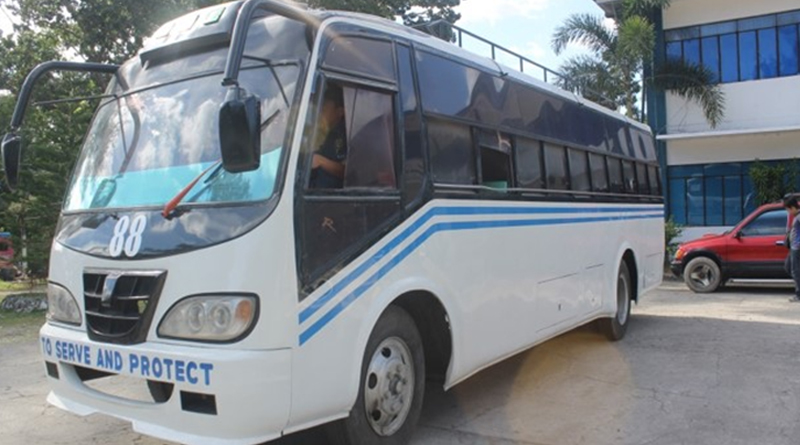 Bohol redefines crime-busting: it is all about the bus, and police expect no trouble.

When adversity is the mother of inventions, Bohol police authorities scrape the limits of their imagination to put up workable strategies to counter drugs spread here and found two ways. And itâ€™s all about the bus.

Bohol Provincial Police Office through Police Senior Superintendent Dennis Agustin recently presented to the Provincial Peace and Order Council (PPOC) in a meeting last week, the crime BUSter: its new ace on the sleeves against drugs.

The crime buster is a â€œBUSâ€ literally meaning that mode of mass transportation designed to help in the mobilization of police personnel and employees, explained Supt Agustin.

Beyond that, Bohol police also said they will use the bus to ferry stranded students left behind by the public utility bus or jeepneyâ€™s last trip for the day.

Students in Tagbilaran, especially those taking the night classes often stay in groups by the roadsides or terminals waiting for the often inexistent transport home. Here, they become prey to prowling criminals.

Or, at times when the more hassling strikes happen and no vehicles ply the streets, the bus can help, according to PInspector Winnie Lopena.

Here, the Crime Buster plays a crucial role, police sources from Camp Dagohoy said, especially when the bus does not just offer transport, it also incorporates a symposium on drug abuse and awareness on board.

Drug abuse among students has become a prevalent issue in Bohol. At the City Peace and Order Council Meeting recently, Taloto officials tipped the police of widespread use of drugs in the district, especially near the schools. The drug agency also in Bohol admit that drugs can be easily sourced out near schools, putting more and more students in harmâ€™s way.

Studies have also posited that many of the students who get into the drug habit started out of curiosity only to find out that they have been hooked.

Police in Bohol also ascribe the increase in petty and heinous crimes is largely due to drugs.

The move to spread drug awareness inside the bus is a novel idea that gets a captured audience getting the much needed information, especially on how to avoid the temptation to get to drugs, a businessman member of the BCCI said.

The bus, Camp Dagohoy sources said, is a donation from a bus company operating in Bohol.

And while ferrying students and giving onboard drug awareness lectures is a service of the Crime BUSter, in Clarin Bohol, a police officer grandson of a famous Filipino novelty singer is getting internet attention for another novel anti-drug campaign.

PO3 Janew Villame, Yoyoy Villameâ€™s grandson sings to passengers his own composition of novelty songs about the drive against illegal drugs and messages for clean elections.

While he sings, the other cops in his team roam the bus soliciting tips from passengers on known drug personalities in their barangays, shared Agustin who lists these as their best practices.Â (rac/PIA-7/Bohol)