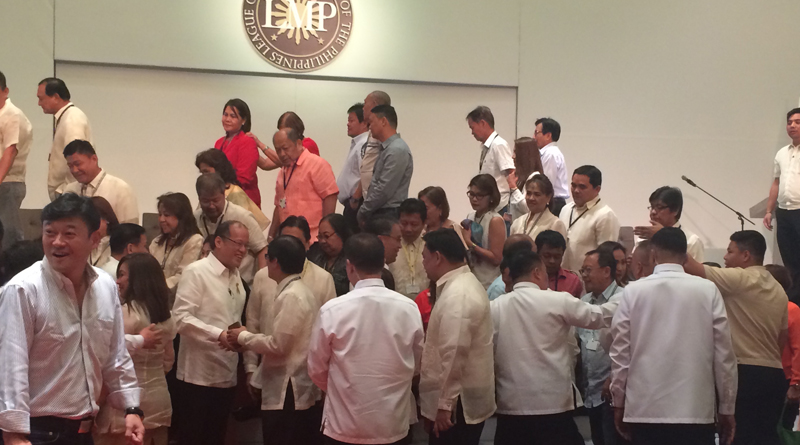 The people of Anda town was able to personally thank Pres. Benigno Aquino III for the biggest ever infrastructure project which the municipality received over the years.

Mayor Dodong Amper got the chance to thank the President during the recent national convention of the League of Municipalities (LMP) held at the Marriot Hotel in Pasay City last week. The dynamic town executive who is running for his second term during the May polls articulated to the President that the on-going road concreting project to Badiang which leads to the famous Lamanok Island tour is something which Andahanons have been dreaming of. The bad road condition in the town will soon be a thing of the past after this concreting project be completed, the mayor told President Aquino who expressed elation to hear that the national funding for road development reached the countrysides.

Mayor Amper also told the President of Anda’s success in promoting the town as a top tourist destination in Bohol (next to Panglao). He personally extended his invitation for the President to visit Anda which takes pride of its white sandy shorelines.

The President told the Anda mayor to keep up the good work he is doing in Anda which has taken off from where it used to be as a sleep town despite its vast tourism potential.

Mayor Amper’s dynamic leadership in generating projects gained him the reputation as the “most forward looking town executive Anda ever had.”

During an interview withÂ The ChronicleÂ after his chat with the President, Mayor Amper expressed gratitude to his constituents for acknowledging his thrust of setting aside politics in implementingÂ  his programs and projects. It maybe recalled that upon the assumption of the mayor , he announced to be non-partisan in the delivery of his projects, to include baragays who were perceived to belong to the oppsition camp. Mayor Amper also takes pride in implementing the salary hike benefits to the workers of the municipal government