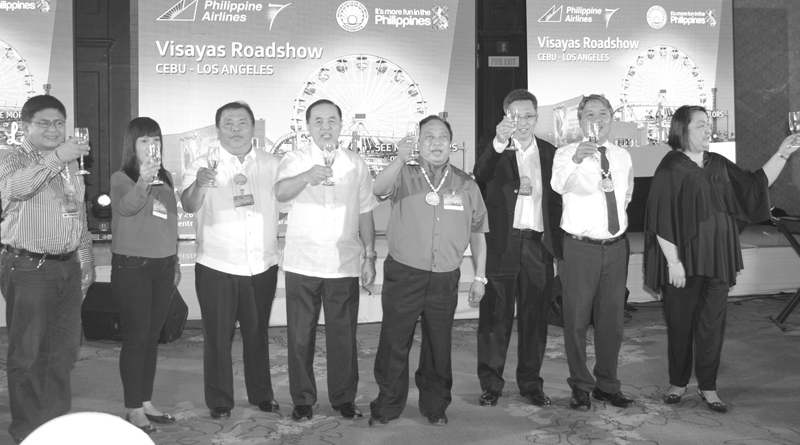 Boholanos abroad, especially in the United StatesÂ  can now be closer to home when a historic long haul flight finally opensÂ  from Mactan Cebu to Los Angeles International Airport (LAX) and back three times a week starting on March 15.

As your local government officers continue to beckon tourists, your national carrier is relentlessly pushing for tourism and its access to people, PAL Senior Assistant Vice President for Sales Harry Inoferio said during the Visayas Roadshow to drum beat the launching of the Mactan-Los Angeles flight held at the Metro Center Hotel last Friday.

Inoferio said PAL has finally acceded to the popular demand for the service, which they also see as contributory to the continuing tourism campaign of the province.

Inoferio said the new routeÂ would mean more tourists access to the Visayas region, opens up an unprecedented tourist access to Bohol from Cebu as well as, industry-wise, the opening would trickle the benefits of access to Bohol .Likewise, this flight will be a welcome note to the Boholanos departing for Los Angeles as this will give them the convenience of no longer flying to Manila.

As this brings more flight to the US, Inoferio added that the flight that departs Cebu every Tuesday, Thursday and Saturday leaves at 6:25 PM and arrives in LA at 5:55 PM.

For the LA, that same route puts up an LA to Cebu on the same days at 8:40 PM and arrives in Cebu at 4:40 AM where the passengers escapes the traffic and feels totally refreshed following a long rest on board.

The maiden flight will be the main highlight of PAL’s Diamond Anniversary after serving the public for 75 years. Inoferio pointed out.

PAL boasts as the oldest commercial airline in Asia, but currently maintains the newest fleet as their aircrafts are between 1 to 3.5 years old, Inoferio said.

The flight, for Mactan Airport, becomes the 34thÂ international flight from the Cebu Island airport.

With the development, PAL now has currently 42 international destinations as they continue to expand their domestic destinations, volunteered Christopher Libumfacil, PAL Area Head of the Visayas who graced last Friday’s roadshow.

For the flights, PAL is deploying its new Boeing 777 300 ER, Airbus 340, Airbus 321, Airbus 323 and Airbus 330, Libumfacil said.
Since the country emerged out of Category 2 earlier last year, Philippine Airlines has made good on its promise to increase and improve its offerings to the US.Â  It deployed the Boeing 777-300ER aircraft on flights to San Francisco and Los Angeles. Â Â Â Â Â Â  Earlier this year, it reopened flights to New York’s JFK airport.Â  Previous PAL management said that flights to Chicago and cities in Florida are also being considered.

With the addition of this flight, Los Angeles gets up to 14 weekly services from Philippine Airlines.Â  This also brings the total number of weekly flights the flag carrier has to the US to 38.

Governor Edgar Chatto called the opening of the route, a milestone in Bohol as it assures connectivity, which he incidentally lobbied for in his State of the Province he delivered that same day. He cited the Cebu-LAX flight as a major factor in boosting the tourists arrivals here.

For his part, Rep. Rene Relampagos, chair of the House committee on tourism said the flight will further highlight Bohol as a destination with the accessibility Bohol from Cebu citing 28 daily round trips served by three fast craft companies.

The Visayas Roadshow was graced by tourism industry players to include tour operators, hotel and resort owners and the local media.Â (rac/PIA-7/Bohol)