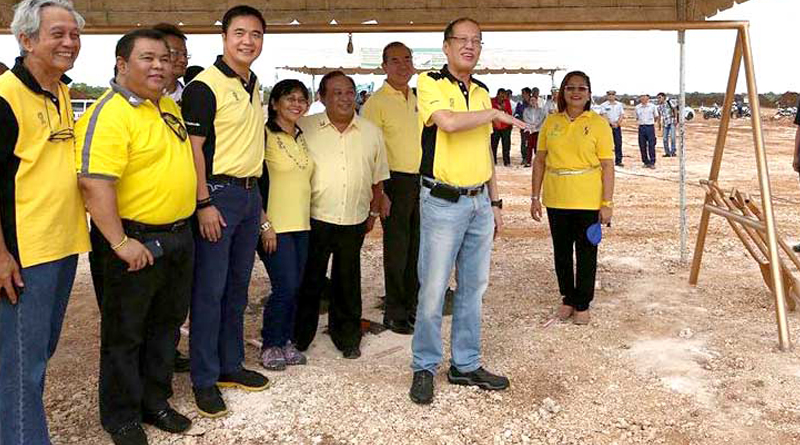 OF COURSE,Â  IT WAS Â during the presidential term of your beloved mother Cory Aquino that the idea of a Panglao Bohol International was first hatched. This was through her former DOTC chief- our former governor Constancio “Nonoy” Torralba in his grandiose Panglao Tourism Estate.

Through the years Â of presidents Ramos, Estrada and Arroyo – the project caused alternating emotions of exhilaration and dismay- among Boholanos-as the fortune of the airport project was subjected to the ebbs and flows of opinion and circumstance.

For a while, this main adjunct to Bohol’s flagship industry Â appeared like a beautiful sand castle on the shore- beautiful to view only to be Â swept away when by the waves striking Â shore.

We therefore thank you -that in your presidency- the airport was approved and bid out successfully to two of the most professional and experienced airport builders there could be- the Mitsubishi Corporation and Chyoda Corporation. We expect that the operation and maintenance contract for the airport will also fall into laps of Â similarly Â structured professional groups.

You have seen to it that your first greenfield airport will rise in Bohol- with solar ,LED lighting and sanitary waste disposal using the top of Japanese technology. We cherish our environment- in this case -our crown jewel Panglao, Mr President- and thank you for protecting what the Almighty had given us. We do not have much that is why we cherish what we have,

And you could not have chosen a better place. Panglao’s environs is one of the world’s most bio-diversified and the beautiful Bohol has 75 other such islands. We need not mention the chocolate hills and other tourist sites that make our province one of the most preferred destinations in the country.

Yes, we will compete with Cebu and Boracay resorts. No, we will not out-twerk and out-salsa Boracay that party place nor out-citify metropolitan Cebu. What we offer is peace and quiet, pristine white beaches and a smiling, happy people.

That is why the city airport has outgrown its usefulness. In 2013 , it was already the 8th Â busiest airport in the nation bringing close to 800,000 visitors despite its postage-size terminal. Â But mind you, the tourists that come here come largely from the almost hourly ferries from downtown Cebu , not even the airport,

That is why Â a world-class international airport that can house 1.7 million passengers in a year Â like the Panglao airport is heaven-sent. For what use are thousands of available hotel and resort rooms and scores of prime tourist sites- if we cannot bring the volume to view them in the province?

Tourism has improved the lives of many Boholanos .After all tourism accounts for 8% of GDP, produced P227-B revenues in 2015 and is now the third best dollar producer for the nation after the OFWs and the BPOs.

Perfect is the timing now- now that the open skies policy is on and the ASEAN integration (involving 600 million people) is navigating at breakneck speed. But Â we know that the support will not just be from the usual Koreans, Americans, Japanese, Europeans and Chinese.

DOT secretary Roberto Jimenez says in 2013 alone 4 of every 10 Filipinos above 15 somehow traveled to one place in the Philippines that year or estimated at about 26 million traveler-Pinoys in their own land. That is about 39% of the entire Filipino race. There is so much promise ahead.

Some of the major players in the R and R business are already here. The other Big Boys are keenly watching every spade of ground your government places on the runway and have opened their vaults to come in big to Bohol soon.

As an economist you are the first to realize that there are indirect multipliers that tourism bring from its ancillary-related industries. Â Prosperity signal in Bohol points absolute north, doubtless influenced by the construction of an international airport.

You were with us Mr President in times of misfortune. We do not forget how you spent the night in a tent in Loon to lend your presence to your suffering countrymen. From where we come from we call that empathy Mr President- and our memories will be long on that.

And here you are again today-and we do not mind seeing you on a chariot in triumph.

For you have fulfilled what all of us Boholanos has long dreamed about. This airport.

You may no longer be president when the first jet from abroad filled with tourists screeches at the runway of the airport- but we will always remember that you started it,

Do come back home, Mr President, hopefully with your beloved partner in tow.

Once again, thank you, Godspeed.