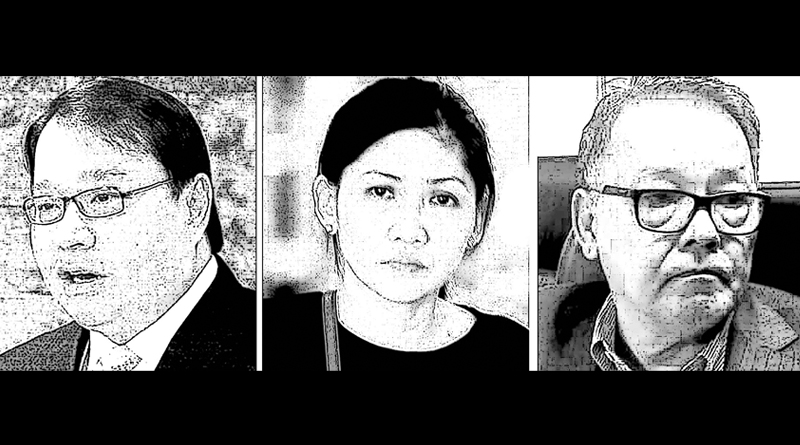 ALMOST EVERYONE Â HAS HEARD Â of the US$ 81-M (close to P5-Billion) deposits stolen from the Bangladesh Bank account with the US Federal Reserves by Â cyber hackers and laundered through the Philippines primarily through RCBC, a big local commercial bank.

Laundering is done when source of the funds are dubious (criminality ,theft) and are transferred to other vehicles so they can be spent “legally”Â . The international community is so much against laundering that all have made strict Anti-Money Laundering Laws.

The difficulty of doing laundering is so daunting that , according to Sen Sonny Osmena, the members of the laundering conspiracy can get as much as 30% of the loot. Â So of the P5-B stolen money, the criminals could now be sharing P1.5 B as commission.

The last few days and the Senate hearing Tuesday only created more questions than answers. Â There is an obvious attempt to cover tracks by certain persons.

But at the outset, let us state that whatever the results, RCBC, the fifth largest bank in the country -majority owned by the family of taipan Alfonso Yuchengco , will not be affected financially.It is very strong in terms of liquidity, solvency and profitability.

At the end of the day- the real issue is who in RCBC participated in the laundering of this huge amount of almost P5-B ? And if proven, what are the penalties under the law?

This Bank Heist and Laundering act Â will linger Â on the news headlines for a long time.

For now, the questions the public are asking for answers include the following:

+ If this was a bank heist perpetrated by illegal hackers, why did the governor of the Bangladesh Bank (their central bank) resign?

+ Why did the Federal Reserve Bank deny that there was such a hacking incident regarding the US$81-M of Bangladesh Bank?

+ Is the globe now Â at the mercy of cyber criminals that P5-B can just be hacked even from the American Â banking system? Are any of us safe?

+ Four Filipino recipients of the stolen money opened their Â RCBC bank accounts a year ago in May 2015. Was this a long-gestating – a real set up situation- waiting for its execution in February this year?

+ Did the syndicate know that Maia Dequito and William Go were once colleagues in East West Bank (formerly) and was the reason why her RCBC Jupiter branch (of Dequito) was used as vehicle in the crime?

+ Why was the CCTV of RCBC Jupiter allegedly “not functioning” during crucial days related to the case?

+ Â Could a lowly branch manager transact a huge business such as P5-B without the knowledge- much less the approval – of the high officers of RCBC? Its International Department, Comptrollership and Treasury?

+ Could the RCBC Board be unaware of the huge inward remittance worth P5-B when in their board are Â such finance whiz and upright men Â like a Cesar Virata?

+ The four recipients at the RCBC branch were discovered to be fictitious ones in many aspects. Why was the KYC (Know Your Customers) mechanism suspended in their case?

+ Why was AMLA so quick to file charges last Friday against the hapless Branch manager and the four depositors and even barred the branch manager Â from leaving for Japan (as a birthday gift of her son) Â when AMLA cases are not subject to hold departure orders.

+ Â There is a general Â talk of a lobby in 2013 to exclude casinos (who were the final recipients of laundered money) and real estate under the AMLA law.Who were the senators in 2013 who made these two industries exempted from the AMLA?

So , expect this continuing saga to continue for long. We just earnestly hope that the banking system and the country in general will not be viewed as accomplices- if not part of the engineers- Â of the money laundering. That will leave a very bad taste in the mouth.

moreAT THE CURRENT STATE AT LEAST,  The Philippines seems to be winning the case vs. COvid-19. Even with just 25 million…

moreTO OUR CALIBRATED JUDGMENT,  our present Electoral System is weighed down badly by three things: the multi-party system, Substitution Rules…

more“STRATEGIC” MOVES TO CONTAIN COVID 19 AFTER MORE THAN A YEAR  of fighting Covid-19, we have an idea of what does…

moreUNABLE TO DEFEND THE INDEFENSIBLE about Boholano citizens’ charges- in the legal and public opinion stages- the Capitol, led by…

moreGOVERNANCE POLICIES ARE   are only as good as their effective implementation. Without that -policies are just pieces of trash paper-…