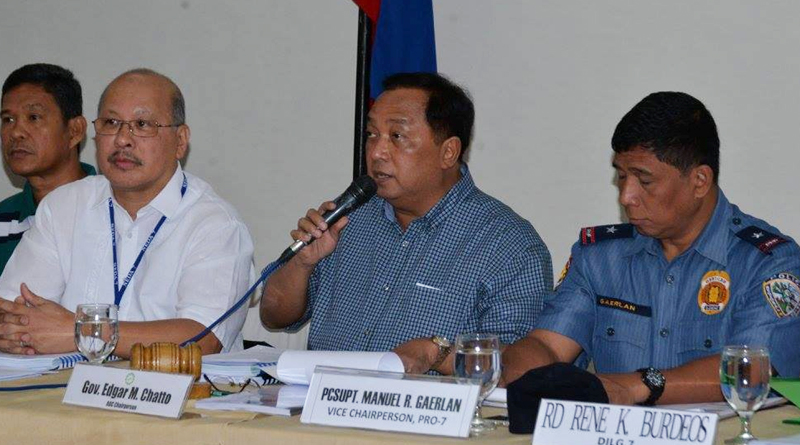 Bohol is safest where crime volume has remarkably dropped contrary to the increases recorded in other major areas in Central Visayas, according to the latest police update presented in the joint meeting of two powerful regional bodies.

This is despite the provinceâ€™s mainland size and surrounding component islands, as well as precisely its growing population and steady development that beget peace and order concerns, including isolated incidents in this running election period.

The biggest crime reduction rate in the region posted by Bohol was only equalled by Siquijor, which peace and order concerns are considered â€œeasily manageableâ€ because of its having only seven towns and no city.

Boholâ€™s police accomplishments as presented by the PNP regional chief were taken as a validation of the able and tested leadership of Bohol PNP Provâ€™l. Dir. Dennis Agustin, Chatto said.

Gaerlan himself presided over the RPOC because its chairman, Cebu Gov. Hilario Davide III, could not attend the joint full-body meeting with the RDC, which is chaired by Gov. Edgar Chatto.

Mandaue City brought down its crime volume by six percent (6%), but which is still two-point deficit compared with the identical Bohol and Siquijor performances of 8% reduction.

The comparison was based on the crimes volumes in the different major areas in the region for January and February this year as against those in the same two-month period last year.

Gaerlan further found out that the index crimes in the province of Cebu, Cebu City and Lapulapu City to have climbed higher while they dropped by 10%, also marked significant, in Bohol.

On the intensified illegal drug campaign, the regional police official cited the 101% increase in the volume of shabu confiscated which totalled to 3,712.99 grams in the region also as of January and February.

Gaerlan said heightened 495 police operations were conducted, resulting in the arrest of 766 persons (30% increase) as against the 589 nabbed in the same period last year.Â  Cases filed also increased by 22%.

All these are indicative of a determined government effort that was otherwise lacking in the past, explaining further for the greater amount of illegal drugs seized and number of arrests made against suspects who long before were just free to commit and recommit crimes, the police said.

The PNP cited the support of the civilian government to the police who, together with other law enforcers, were commended by Chatto while reiterating to strongly fight illegal drugs at all fronts.

Chatto recently issued an executive order creating the Joint Task Force Dagon to curb criminalities, drug abuse, and other threats and disturbances to peace and order, public safety and security.

Central Visayas, especially Bohol, remains a progressive, safe and peaceful haven for its residents and visitors and tourists alike, according to the PNP-7 chief who vowed that the police in his command will be mighty doing its mandate.Â Â (Ven rebo Arigo)