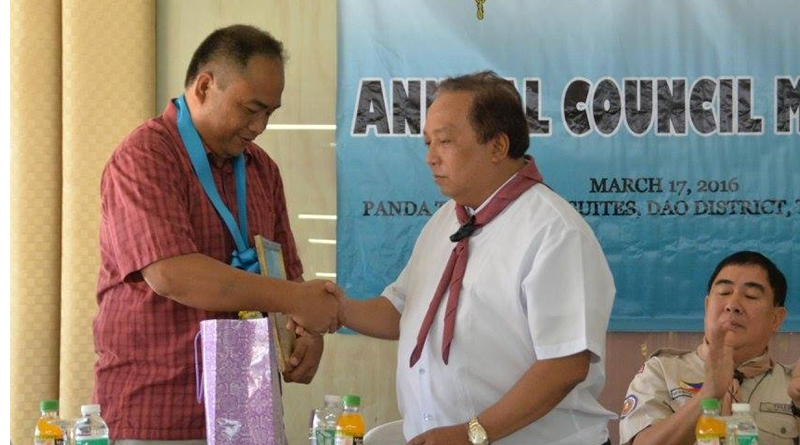 â€œAnother good news,â€ said the governor, â€œis that out of 121 councils nationwide, BSP-Bohol was the only council in the Visayas and Mindanao area which landed in the top 5 as one of the finalists.â€

Thus, this paved the way for the Council to again, be given the prestigious Lorillard Spencer Award for being the Best Council nationwide, its fifth successive award since 2012.

â€œEveryone deserves a pat in the back,â€ he said, â€œfor we must have done something right to deserve the award.â€

â€œAnd we should be proud for we are now 69,138 strong and still growing in number,â€ he added.

Council members from all over Bohol flocked to the conference hall of Panda Tea Garden in Tagbilaran City for said annual meeting, filling the room to the brim.

To spice up the assemblage, Businessman Engr. Jerome Auza shared his life story with fellow scouters and testified how scouting helped him through trials and through life.

He recounted how, right after the earthquake, his long-dormant scouting skills resurfaced when he experienced hardships in his supposed to be mundane everyday chores.

After experiencing too many boggling tasks due to the absence of both water and electricity in most areas in the province, he said he had an enlightenment.

â€œI came to realize that despite all the trainings and lessons that we are teaching our young scouts, we never bothered to teach them about money management skills and personal finance,â€ he said.

â€œThat,â€ he continued, â€œno matter how adept we are in our respective fields of expertise, everyday life skills like simple money management are so hard to do without proper background and training.â€

Engr. Auza then urged every scout inside the hall to include the subject of personal finance in future boy scout trainings, which earned the nod of the crowd.