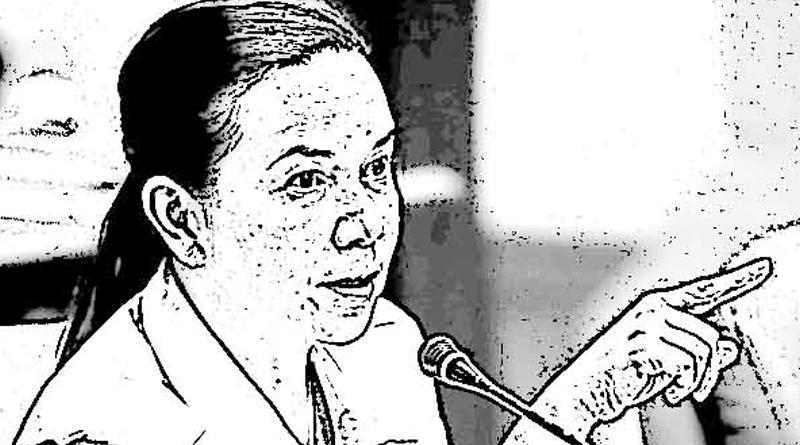 LAST WEEK WE CAUGHT Â Senator Grace Poe transformed into a gritty independent contender and a feisty fighter inside the ring.

This was observed during the Presidential Dialogue with businessmen at the Makati Business Club and Management Association Forum in Dusit Hotel Makati and the 2nd presidential debates anchored by TV 5 in Cebu City.

In an all-male debate case, the ‘rose’ threw poisoned thorns as well -corruption in the case of vice president Jojo Binay and incompetence on the part of former DILG chief Mar Roxas.

Asked Â by Mayor Rody Duterte “what she will do if China makes incursions in the Philippine isles in the Shoal in the middle of the night,” the 2013 senate top notcher narrated that Â she will jump right out of bed ( taking a swipe at indecisive leadership), convene the heads of the PNP, AFP and the Coast Guard for immediate national response and a more long-term solution by invoking the rights of the country under the “Visiting Forces Agreement” with the United States Â of America.

On the other hand- what some reformist-businessmen saw in the senator , heir of the great FPJ legacy, was her being an independent candidate Â stripping her of unnecessary baggage of a toeing a party line and Â vested interests. She had cautioned her contributor-supporters not to expect any “quid ro quo” in her administration and that “she will only be beholden to the people who elected me.”

Candidate Cory Aquino was Â likewise belittled by her foes then in 1986 as “devoid of experience.” The icon of democracy later Â reclaimed her electoral victory stolen by fraud through People Power.

In a sense some people believe Grace Poe is more equipped to handle the levers of power than Cory who had acknowledged Â her long years lived as a housewife of Ninoy Aquino.

Both graduated from excellent schools here and abroad. Poe ,however, distinguishes herself with both executive (MTRCB) and legislative (senator) experience aside from an entrepreneurial bent as manager of the “film holdings” of her popular father and a nurturing nature as a former teacher.

Businessmen were pleasantly surprised she had a strategic road map in her bag.

Grace Poe did not hide her advisers to include ,among others, former finance secretary Boy Blue Del Rosario, economists Armand Fabella and Cielito Habito and advocate Peter Wallace. If elected president, Grace Poe said he would retain some of the “good members” of the Aquino Cabinet.

But she did mention by names those she will not keep: Abaya of DOTC, Alcala of Agriculture and Henares of the BIR.

The senator who pulled 20.3 million votes in 2o13, the highest for an elected official, said we have been left behind by our ASEAN neighbors -that gross of the 2% annual population growth-the nation must register an 8% GDP growth for the next 25 years to bring the per capita income of Filipinos to US$12,000 or about P600,000 a year.

Senator Poe listed her do’s and dont’s. Corporate tax of 30% must be lowered to compete with the ASEAN. Infrastructure budget must be increased by P250B . Redistribution of wealth will not do – but enlarging the economic pie may make wonders by joining Free Trade Blocs like the ASEAN and healthy bilateral trade agreements between equal nations.

There has to be a sweeping change in the mindset of the Executive , Legislative and Â Judiciary that we are a nation where the rule of law and meritrocacy prevail.

Part of inclusiveness to provide the youth health and education (free tertiary education Â and free lunch for elementary and high school students). Thirty percent of the national budget would go to Mindanao which should be developed with a “inclusive, transparent and sustainable matrix.”

Coordination will have to be done between the Department of Agriculture and the Department of Trade so that the dynamics of production and marketing are synchronized to the benefit of the teeming poor farmers and fisher folks especially. Job must be created because they create wealth and more taxes.

Has Senator Grace Poe covered all the bases? Is she ready to bat into a home run with all her bases loaded? Will she be as good as she says she will be?

Will her bevy of sage advisers and her devoted reading to the book “Why Nations Fail” provide the impetus to her successful ascendancy?

They say that one sure sign of a great leader is that- Â by sheer charisma , he/she can bring people to his/her Â point of view and allow them Â take the crusade he/she espouses as their own.

Will Senator Grace Poe’s independence, fighting spirit and road map take her to Malacanang? You be the judge.