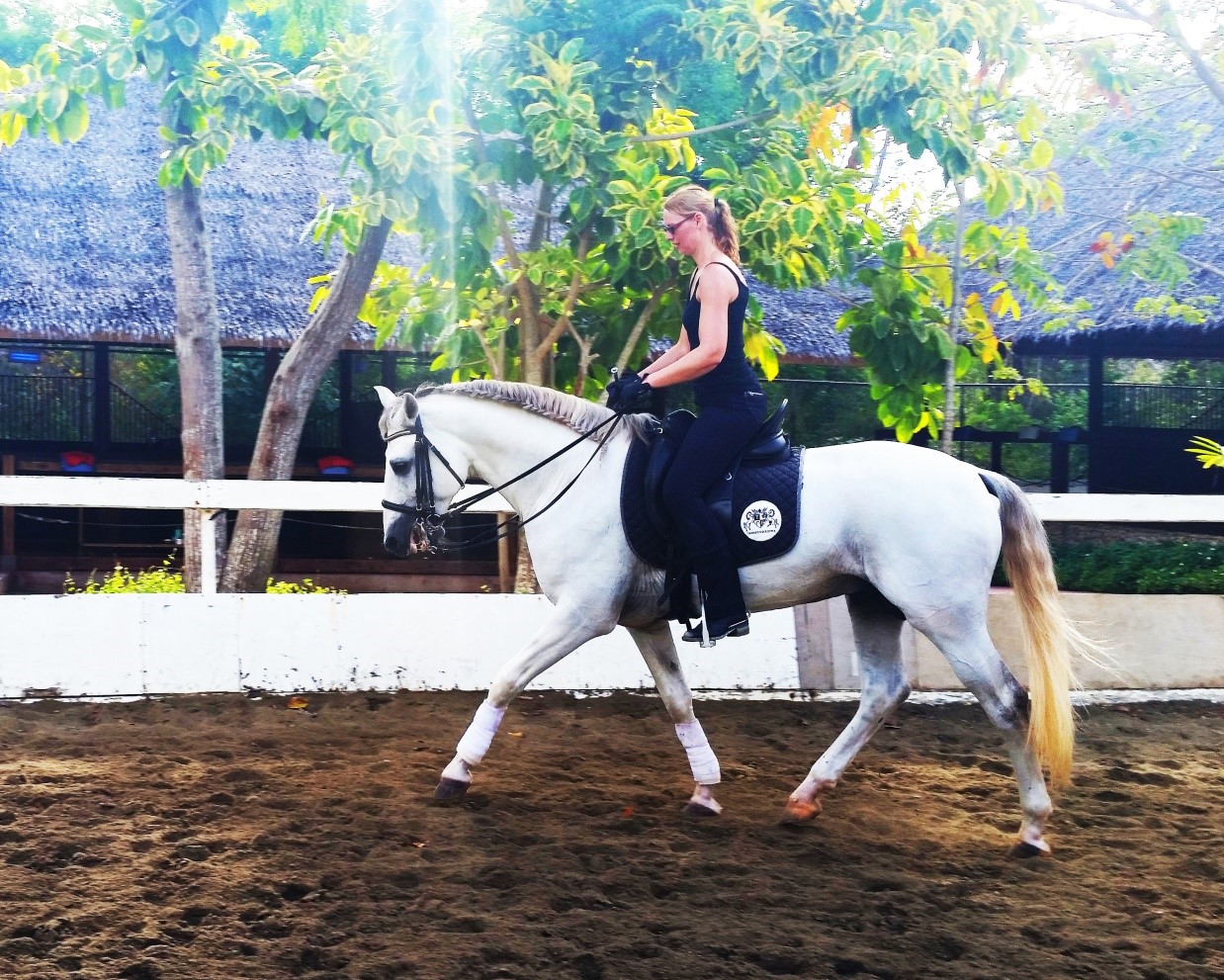 The equestrian centre inside the sprawling Tarsier Botanika in Tawala , Panglao The equestrian centre known as Tarsier Equestria inside the sprawling Tarsier Botanika, located at Km. 16 in Hoyohoy, Tawala, Panglao, Bohol is probably the only one in this part of the world that trains horses with a lot of respect and affection, in the tradition of classical equestrianism.

The principles of classical equestrianism advanced from that time when horses had a vital role in cavalry or military training and later evolved into the art of classical dressage; that of â€œriding in harmony with, rather than against, the horse.â€

â€œClassical riding is like ballet; so much so that we aim to ride the horse in perfect balance and harmony as in a dance, and with elegance and grace,â€ explains Madame Patricia Moussempes of Tarsier Equestria.

In the quest to further her knowledge in classical dressage, Moussempes enrolled at the international workshop conducted by the prestigious Anja Beran Foundation at Gut Rosenhof in Germany, attended by some 40 participants of different nationalities, mostly from Europe and the United States, with her as the only Asian in the group.Â  â€œI needed to see Anja in person so I went there in 2014 and it was like the door opening to another worldâ€¦ This year, in the meantime, I contacted Anja to ask if thereâ€™s anyone interested to come to Bohol, help train at Tarsier Equestria, and do a holiday at the same time and so they recommended Christine.â€

Thus, Moussempes brings to Bohol an internationally-known trainer in classical equestrianism, Christine Schmiedel, a professional director of a Dressage equestrian centre in Franconia, Germany and who has been mentored by Anja Beran for more than ten years. Schmiedel is one of only six certified external trainers and chief riders sent by the foundation to stables abroad – in Dubai, the US, UK, and other European countries and for the first time in Southeast Asia.

Schmiedel has been at the Tarsier Equestria in Panglao for almost a month now to give riding lessons and train horses according to the principles of classical dressage. â€œAfter a while of me riding the horses, I started giving lessons to owner Patricia and her team so they can continue the classical work after I left. We do ground work, exercises to improve the rider’s seat and classical lectures. After each lesson, we do an intense briefing about the further tasks according to the horseâ€™s needs.”

â€œWe are trying to raise an awareness on the classical dressage principles, which is actually good for the horse good and for the rider, like in the old days during the 17th century and even earlier. It is a very old method and more of an art, rather than riding the horse just for competition,â€ Moussempes explained.

â€œIt is based on respectful treatment for the horse; we only train the horses in what is natural for them. We want to make the horse improve and grow beautifully, not just physically but also mentally,â€ states Victoria Leipert, editor of the foundationâ€™s newsletter, who is also traveling to Bohol with Schmiedel. â€œIt is about patience and giving the horse as much time as needed to develop fully. The rider also has to have certain strength, stability, and a mentality to question oneâ€™s self, to be very analytical and to give respect and feeling to the horse. Actually, it is a very Asian philosophy to have that sense of wholeness, like the approach used in karate or in Zen,â€ adds Leipert.

â€œIn the process, we develop a certain bond with the horse â€¦ you learn in time when you ride a horse that each has a different personality,â€ declared Moussempes who has three pure blood Lusitanos, the distinguished Portuguese horse breed, and some ten other horses and stallions on the stable at Tarsier Equestria.

â€œFor Bohol to have this very kind of training, I believe it is good for tourism and for Bohol. In the future I plan to have more clinics and for people doing lessons here,â€ says Madame Patricia who, with husband Nicholas Moussempes, owns Tarsier Botanika, a 10 hectare tropical landscape committed to value and respect the natural environment for our sustainable future.

She plans to attend the next international workshop at the Anja Beran Foundation in Germany in July, 2016. Those interested to attend the same may contact her through mobile no. 0917.526.6001 or email at inquire.tarsierbotanika@gmail.com. (By: Sonieta Deguit Labasan, lifestylebohol, the Bohol Chronicle)