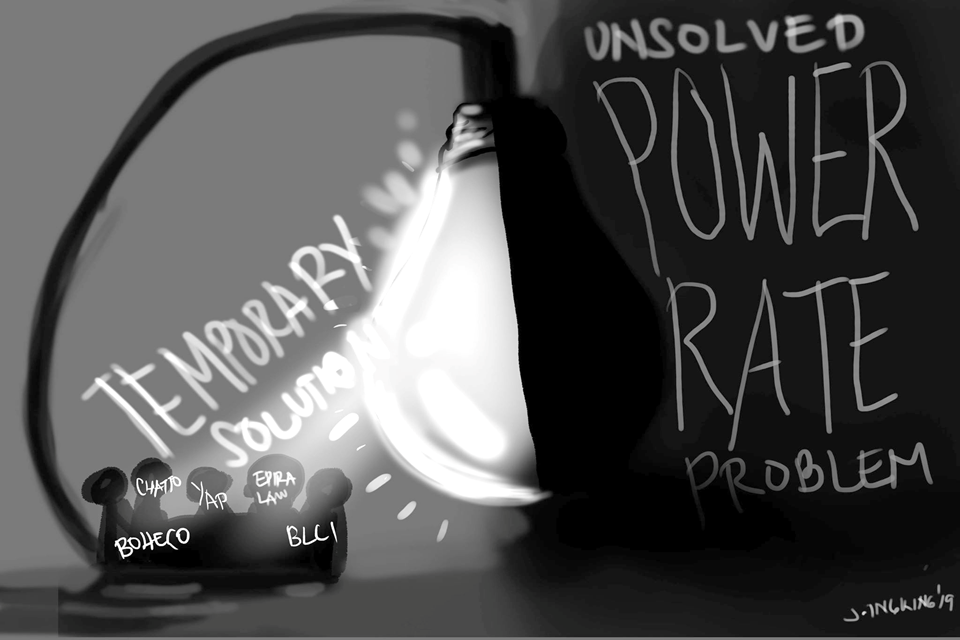 The power consumer massacre that could have occurred in July was partially abated after a two-day marathon hearing initiated by new Governor Art Yap backstopped by former governor and now Rep. Edgar Chatto with the figurative “Powers-That-Be” in Manila midweek.

Partially stopped on their wayward track northwards were the electric rates to be imposed by BOHECO I and II and BLCI in the month of July. But the deep-rooted “iniquitous” formula for power rate computation of the Distributing Units (DUs) here is still under “review” because such is carved in stone as part of the 2001 EPIRA Law which authorized WESM (Wholesale Electricity Spot Market) to determine the power generation mix and manage the prices of power on the basis of the demand and supply relationship.

As it turned out the Bohol DUs pricing is dependent 45% on the “pass -on rate” of the WESM. The runaway, frightening increase in Bohol power rates in June shocked all forms of businesses (especially tourism) whose operating cost is heavily loaded to the price of power here; the alternative of using their own generators is a worse option, financially.

Bohol potential Investors will certainly take pause because of the spiked rates and the poor will have to shorten their use of lights at home and time to watch television. This punishment knows no social barriers.

The marathon meeting result was a drop in the Boheco I power rate by 99 centavos per KWHour or 8.3% in July compared to June and P1.29 per KWHour reduction for BLCI covered franchise areas or about 10% compared to June. At press time, we were still awaiting the new July computation under Boheco II.

The other arguments posed by the governor and first district congressman for reconsideration were still considered for “review” after the marathon meeting. (See related Page One News Story).

But the bigger problem, it appears to us, is a gargantuan macro one that is almost beyond the mathematical nightmare of big or small distributing units in Manila and the provinces. We are all connected to a national grid.

Even Chair Manuel V, Pangilinan of the biggest power distributor in the nation (MERALCO) is worried that we could have higher power rates in the coming months because of the slow approval of contracts for the construction of new electric generators. In the face of this acute supply shortfall, the nation has been entertaining the highest peak demand for power in 2019.

The government Energy Regulatory Commission and the NGCP cannot deny this because from just January -June 2019 -10 yellow alerts ( power supply is thin versus demand) and several red alerts (acute supply shortage) have been raised this year. Thus, several places suffered numerous rotational brownouts just to save some power supply. An agitated NGO called Citizenswatch Philippines noted this with anxious disposition.

With the tremendous demand for power under the Build3 projects and the high-voltage  (no pun intended) growth of the Philippine GNP, the presence or the lack of “power supply” in the immediate future will be a “game changer” for the nation which is , otherwise, in the throes of skyrocketing into economic prominence in Asia.

There is also a suspected “collusion” among power generators of scheduling their maintenance shutdowns in time of the peaking of demand (like summer) for the WESM to pass on higher rates to reflect the meltdown. A Malampaya power shutdown,  for instance, is likewise expected soon.

We enjoin or congressmen Chatto, Aris Aumentado and Congresswoman Alexie B.Tutor, to join with other progressive blocs in Congress to initiate an investigation into this alleged “collusion” which was also exposed in its naked viciousness in the high power months obtaining in 2013 -by the old Congress.

We earnestly beseech them to close ranks and handle this suspected anomaly at the opening of the new Congress and help solve this hideous monster that is sapping the very living cells of the poor and the enthusiasm of business and investors – in favor of profit-oriented institutions.

Likewise, by legislative amendment and /or executive edict, perhaps one can prod our national government officials and the Office of the President (whichever is applicable)  to review the minutiae of the “pass on computation charges” to the DUs – which even the ERC (Energy Regulatory Commission ) Chair herself Agnes VST Devenadera herself had found to be “iniquitous”.

The Leyte-Bohol interconnection of power has outlived its usefulness and is no longer stepping in cadence with Bohol’s economic growth. We have heard of fast-tracking the Cebu-Bohol sub-water cable connection but again that is just a variant of the Leyte-Bohol formulation.

Heard as well is a future interconnection of Visayas -Mindanao grid coming all the way from Zamboanga.

We do not know now what of the above “way-outs” can provide immediate, intermediate and long-term relief to the power crisis that is upon us.

What we do know is that the NGCP since last year had recommended that Bohol get its land-based power generator pronto and that renewables like solar power plants can be off-grid and will provide not only the same but cheaper electricity for business and the people- without subjecting us to the mercy of the slippery, unpredictable relationship between overall supply and demand for power when connected to the grid.

Let us not kid ourselves that the power crisis is just a matter of mathematical debate between parties because, it verily, holds the very future of the economy- ignoring it will be to our own peril with our economic “airplane” crashing into the airport- international or not- before it can take off completely. Let’s get very serious with this one, Watson. Now.