Bohol is worth coming back to 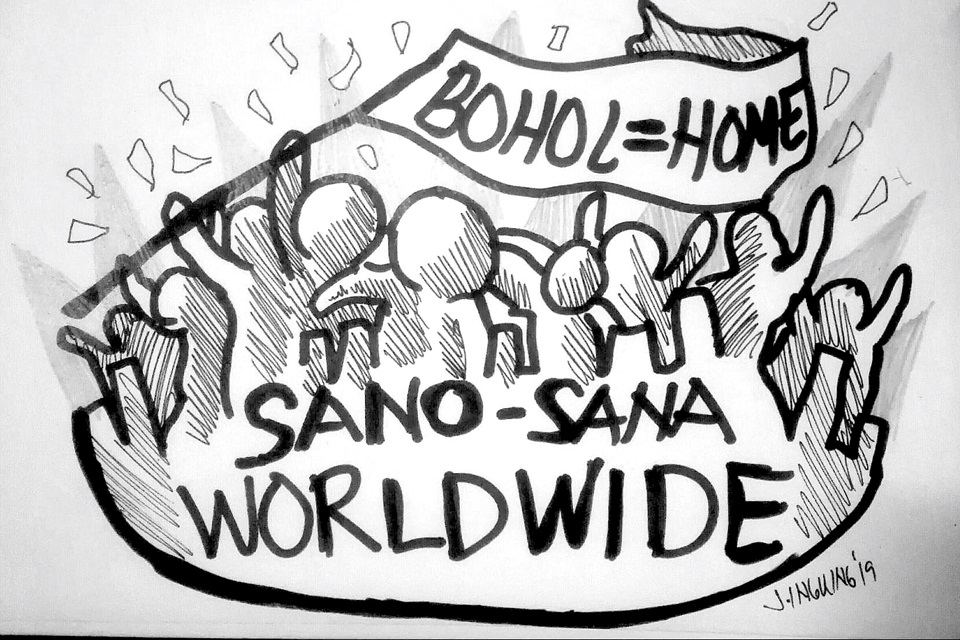 Bohol is worth coming back to

“Bohol is for Boholanos” may sound a trifle selfish but it is not. It just means that only a true Boholano will care for Bohol that way a true native does.

True, home is where one’s heart is, and Bohol has never left the heart of a native-born, even if he finds enormous success elsewhere in the Philippines or overseas.

There is the sound from a distance as if from the Pied Piper borne, beckoning like a tiny voice inside one’s being that one should come home. No, it will not lead the believers to drown in the river as the Classic Comics will picture the dressy Pied Piper.

Instead, it results in the fulfillment of that yearning of the wayfarers to “payback” in terms of time, talent and treasures to the native land.

One such person is Vicky Sandidge, founder of the famous Bee Farm Group, who sold everything she had working as a well-paid nurse in Hawaii to develop first a community of believers in organic science. Confident and articulate, when we first heard Vicky years back lecture about the bees and their lives, it seemed like she could sell anything including the Dauis Bridge without a legal title.

Vicky started small- selling vegetables from her van parked while waiting at the Wisdom School in the city and her two-table affair in Bee Farm Dauis. Today, Vicky and her Bee Farm are by-words in Bohol Tourism.

Aside from the idyllic resort facing the tranquil blue seawaters, Bee Farm is associated with exotic ice-cream, vegetable and flower salads, squash muffins, vegetable lasagna, coffee of roasted corn and wild berries and, but, of course, her signature organic viands.

Vicky is a picture today of a satisfied Balikbayan where her Bee Farm, The Buzz and her unique recipes are appreciated far and wide. Certainly, Vicky has followed Ralph Waldo Emerson who wafted poetic ” Do not follow where the path will lead” and instead, go where there is ” no path and leave a trail.”

While Vicky had gone entrepreneurial, others answered the call of public service and had become elected politicians. Many of them were born and raised poor but vowed they would return and not let their poor townmates go through the same poverty they faced then- now that they have the time, talent and treasures.

They did not just muse and think of coming home -but, actually, did come home in order to make a difference in the lives of others.

One is newly-elected mayor of Jagna town, Joseph Ranola who went through an economic roller coaster ride through the years until he became a guru of sorts when it came to the tricky National Budget.

In Manila, “JR” as he is called, became a resource person for the academe, media like CNN, Radio Veritas and the BusinessWorld, among others and civic organizations like the Makati Business Club. He deplored how the National Budget has been wasted out in corruption and how lopsided has been the distribution of financial largesse across the nation.

Pretty soon, even the government agencies and senators and congressmen became avid listeners to his unique dissertation on the budget. He vowed he will use this expertise to develop Jagna even more through tourism, agriculture and business. Ask how committed JR is to uplift Jagna to greater heights.

He will tell you, 2019 was his third attempt at the mayoralty throne. One less committed would shirk away from such odds. Point made.

Meanwhile, newly-minted Catigbian mayor Elizabeth Mandin is one of the 15 female mayors of the province or 35% of the total who would certainly bring gender issues to a heated discussion. But more than that, Mandin, who was hard up buying herself the cheapest slippers to go to grade school then, would like her town to prosper.

Immediately, she had set up the first village-based coconut processing center in partnership with the Philippine Coconut Authority and the Cooperatives Development Association. Her town is a known coconut producer but income levels are low.

Her town of 22,000 people- also boasts of the first Livestock Auction Center. The first town lady mayor, a flourishing businesswoman in Manila, she talks of a “miracle” that brought her to the new station of public service.

Comebacking Anda Mayor Melecio “Dodong” Amper, on the other hand, was a working student who made it to the corporate world in the metropolis and dreamt of making Anda a tourist haven. With his vast contacts in the corporate scene, he is at the cusp of making the town the successor of Panglao.

Amper says his townmates might not see him all the time -but he is out there scouring the bushes and will bring home the bacon to the benefit of his constituents by making the “Undiscovered Paradise”- into a well-known destination.

With the initial difficulties Ranola, Mandin and Amper faced in life, they could be the “leaders” that business guru John Maxwell talked about: ” The pessimists complain about the wind. The optimists expect the wind to change. But the leaders adjust the sails of their boats”.

So they can be led to the direction they aim for.

Another newcomer mayor is of a different breed altogether. An ex-seminarian who became a lawyer, new San Miguel Mayor Virgilio Mendez, was former chief of the National Bureau of Investigation (NBI) in 2013- the first “insider” ( from the ranks) becoming so in 13 years. Noynoy Aquino appointed him.

Proud of his rustic roots and experience,Mendez led by example and his investigations often led to convictions and his leadership was “hands-on with integrity.” He has been credited with solving high profile murders, the LRT bombing and child trafficking.

Trained by the FBI and the University of Virginia, Mendez is bent in using his Manila contacts to raise the level of the development of San Miguel. Specifically, cementing the rugged roads and bringing water to homes as the town was waterless when he left it.

Finally, veteran Tubigon mayor  William Jao was for a time- a big-shot in his nationwide forwarding business. Sensing something lacking in his high-flying life, he went home with the battle cry to make Tubigon the next city to Tagbilaran.

He has the tools with the second busiest seaport after Tagbilaran and a bevy of beautiful islands and sandbars for tourism. He has come home to a full circle.

All of the above persons were perhaps like the long-faced, disappointed “kababayans” of ours who have left their villages and now form part of the over 10 million Filipinos working overseas and some millions more in other Philippine cities and provinces. Back then, the future for them appeared bleak as midnight.

Now that they have made it, somehow, to levels of prominence, if not wealth, they are giving way to the inborn itch to scurry back home -and feel the warmth of their province mates once again.

But ready to risk it all for the glory of Bohol and a collective sigh that can be heard at the top of the highest chocolate hill that “Bohol is worth coming back to.” Welcome home, homing birds.