The beauty and folly of the separation of powers 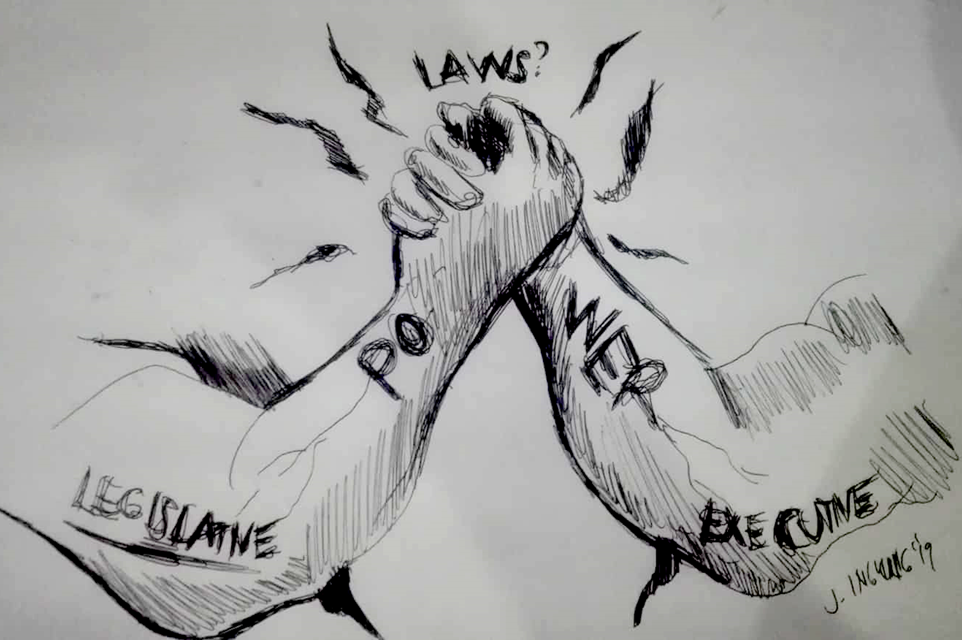 The beauty and folly of the separation of powers

THE DEMOCRATIC FORM OF GOVERNMENT  succeeds because of the two notions of the “separation of powers” and that of the “system of check and balance.”

Consider the beauty of our constitutional democracy. The Legislative (Congress) approves the budget and makes the laws. The Executive implements the law through its agencies, the military and the local governments. And the Judiciary decides whether the laws made are constitutional and the implementation within the prescription of law and order.

The Executive can, in turn, veto the budget and make a reenacted budget a temporary operating fund. The Judiciary can break that impasse. Moreover, in the Aquino era in the wake of the Napoles Pork Barrel scam and the controversial DAP (Development Acceleration Program) – both were outright outlawed as “unconstitutional” by the Supreme Court.

While the Executive can appoint the nominees of the Judiciary, the Legislative has to approve them through the Commission on Appointments. While the President, senators, and congressmen are voted at large by the public, the President can be impeached by the Legislature (starting with Congress with the Senate acting as the Ruling Court)as in the case of deposed President Joseph Ejercito Estrada.

Chief Justices can be impeached by the Legislature who can be influenced by the power of the Executive as in the case of CJ Renato Corona and Ma. Lourdes Sereno. Senators, through independent juridical bodies like the Ombudsman and the Sandiganbayan, can be removed from office as were senators Enrile, Revilla and Jinggoy Estrada.

The system of checks and balance do not always work like magic as the political influence can overlap among the three “independent” branches of government. But having such a system is infinitely better than having none of that.

The extreme situation can occur when because of their “independence” a GRIDLOCK can happen which is a political stalemate or a deadlock situation where there is a patent difficulty in “passing laws that satisfy the needs of the people.”

This is when – in the case of the Executive and the Senate in the USA – they today are at political loggerheads- resulting in gridlocks. When the Legislative is split in the middle between two opposing parties- measures will have a hard time getting approved.

The narrower the political divide and the bigger the number of “moderates” (in the mode of say senators Ping Lacson, Grace Poe and Sonny Angara) rather than the highly partisan ones- the better is the lubricant to ease voting deadlocks in the Senate, for instance.

Political rivalries caused former president Gloria M. Arroyo to dislodge Speaker Alvarez from his throne- in the midst of last year’s SONA -even without the knowledge of a bewildered Chief Executive. The shared Speakership “term-sharing”  between contenders Alan Peter Cayetano Lord Alan Velasco was designed to prevent such boat-rocking to happen again which could disrupt the passage of the Executive agenda.

In the Senate, the presidency in the past changed hands for the same reason.  The check and balance system is in existence-to limit the power that the government can muster. But, on the other hand, gridlocks are no good, either.

Cebu is one example of a province that had grown exponentially economically despite -not because of – the intense partisan rivalry between the Osmenas and the Garcias. Like oil and water, they perennially oppose what the other proposes. Imagine Cebu without that political anachronism.

In Bohol, fortunately, we do not see such dynasties trying to strangle one another for political supremacy. It would be a disaster if we allow politics to rule every nook and cranny of governance. There are-but not too many projects we heard in Bohol that we thought were blocked for purely partisan reasons- all of which should be condemned in the strongest terms.

What can potentially happen is when say a Mayor is facing a Sangguniang Bayan that is opposition-controlled or where the opposition is strong and noisy. It can happen in the city where projects can be delayed by endless filibustering and technicalities as roadblocks to their passage. It will also be the venue of “grandstanding” of councilmen in aid of reelection or in attaining higher office.

It will be sad -as the community will suffer from the needless delay of otherwise meritorious projects drowned in the swarm of saliva and sparks of swordplay in the halls of the legislature. This is where the role of the Vice Mayor as the presiding officer of the legislature will be asked for the highest statesmanship that only the best in the agenda for “the greater number of the people” will be calendared for discussion.

Of course, this is better said than done as partisan passions and political agenda cannot be altogether erased in a democracy. But it should not be Standard Operating Procedure (SOP) that what the administration proposes, the opposition must outright derail and stop.

Of course, if the proposals reek of possible graft and favoring certain parties close to the Executive – to the exclusion of others- the Opposition in the Legislature will be remiss if they keep quiet.

We are, of course, pleased with the news that there are some towns in Bohol where regardless of politics, they settle a common Executive-Legislative Agenda for the year to synchronize the direction of the township. Paddling in opposite directions, they must believe in their hearts, can sometimes upset the canoe and drown everyone in the boat- politically, that is, in the eyes of a disappointed citizenry.

There are situations where the Sangguniang Bayan is to the core opposition versus the Mayor. This is where the ability of the mayor to lead -amid the vicious sea waves- will separate the good mayor from the mediocre one.  The first one builds consensus and accepts compromises to effect direction- the other one remains stubborn- plotting his own political viciousness, revenge and Machiavellism.

Let it be said that when it comes to the common good, we hope our politicians can throw out partisanship out of the window. Think about what kind of legacy one will leave with the constituents who voted them to office. That would be a good starting point.

As far as we know, the elections have ended when the last ballot was cast on May 13, 2019. Now, let’s do the task one was voted for by the people. Immaturity has no place in good governance. Think about it, gentlemen and ladies.