The tragedy of Bohol’s rice farmers 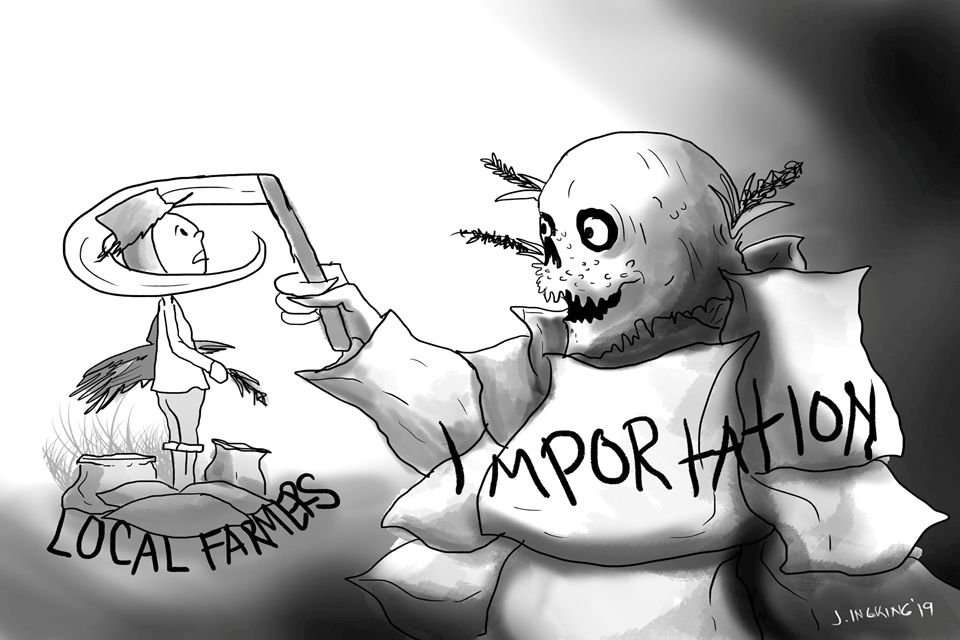 The tragedy of Bohol’s rice farmers

Just because we do not see many of them- doesn’t mean impoverished rice farmers do not exist in Bohol.

Based on three-year-old government statistics, today-there are probably 60,000 rice farmers here. Based on the average family size of 5 persons, therefore, some 300,000  of the  1.3 M Boholanos depend on or are affected by the rice industry.

Other statistics say less than half of these rice farmers’ land are irrigated, the rest dependent on the rain that barely came; even big townCarmen cannot be reached by irrigation facilities.

On the other hand, the Rice Tarriffication Law ( RA 11203 (RTL)), recently passed but lacking yet in publicized IRR (Implementing Rules and Regulations) is a good law. It thinks primarily about food security for 107 million Filipinos rather than just protecting the parochial needs of some 10 million Filipino rice farmers.

For decades, in the name of “protecting” the farmers, rice importation was limited by quota restrictions. There was tons of money to be made- reportedly by bureaucrats who approved the import allocation, the traders who cornered the importation permits and which allegedly acted as a “cartel” in order to dictate market prices. And, of course, there were the smugglers-scarcity being the mother of smuggling.

Divine intervention came last year when these market aberrations resulted in a price supply deficit and prices of rice went to the roof- hiking inflation rate and negatively affecting the GDP. The government was shocked and, thus, the RTL was born.

Today, the full effect of the law has not yet been felt generally by retail consumers because as DA Secretary William Dar said ” although some 2.5 million tons of rice have already been imported up to August”- the traders are withholding their market entry in order to command higher prices. Dar had warned them September 4,  that the full force of the law like “economic sabotage”, perhaps, can be meted on these unscrupulous businessmen in Satan’s robe.

Philippine Statistics Authority estimates the average production cost of palay at P12/kilo. Voices from the mountains of Bohol say some greedy wholesalers here are buying farmgate palay at only P 8 per kilo -stealthily citing what is happening in some parts of Luzon.

But Agriculture Committee Senate chair, senator Cynthia Villar debunked the case – explaining that those being sold at P8/kilo in Luzon were those that have been severely damaged by the typhoon rain causing unwanted moisture.

Buying palay at P 8 /kilo will certainly kill the poor farmer, who is forced to agree to this confiscatory price just to be able to pay for the children’s’ schooling,  have food money for the family and buy the seeds for the next planting.

Can one-fathom cruelty as offensive as this? There are those who pretend to “help” the farmers in need but the financial arrangement is such that in the medium term, the poor farmer will be so much buried in obligations – that he is forced to give up his land as payment.

Have you heard of one who is now an oligarch precisely by “helping” farmers this way?

It is timely that Governor Art Yap has promised that the government will buy palay at P20/kilo (average) to stymie these greedy traders. Sec. Dar said LGUs, after all,  are autonomous and a mere resolution of the SB can authorize the governor to borrow from Land Bank and buy palay from farmers at P15-17/kilo (above production cost) and certainly way above the “criminal” rate of P8/kilo.

This is necessary because the government cannot use the present approved  Provincial 2019 budget because no such specific appropriation exists and using such funds would be technical malversation.

If any funds are left, NFA can also buy, we believe, palay at about the same P 20.70/kilo.

It is important the government acts with dispatch because the so-called (RCEF) of Rice Competitiveness Enhancement Fund of P 10-B will still be implemented only in the 2020 Budget of the DA.

The P10-B funds to be distributed to the aggrieved farmers are without interest for 6 years buts their usage is limited to just seed distribution and machinery. What about working capital, sirs?

After helping the farmers from the above, will be RTL benefit the rice-eating populace of 107 million Filipinos? Yes, but not yet perfectly now.

PSA shows that today-on average- regular milled rice is still priced at P38.40 and well-milled rice at P43.50, lower than last year but not yet at the government targeted retail price of P27/kilo of regular milled rice. As stated above- due to the alleged “cartel”, supply has been presently curtailed and therefore prices still high.  What part in hell should we reserve for opportunists like these?

Top producing rice towns in Bohol are Pilar, San Miguel , Ubay, Sierra Bullones and Dagohoy. Also, runners-up would be the towns of Alicia, Carmen, Talibon, Buenavista and Talibon. All are located in the third and second districts.

It was gathered that currently, the NFA is not buying rice; farmers themselves are not too enthused to sell to NFA  either- because of the tedious procedures in the collection process. Currently, Bohol palay at farmgate is bought by traders (not the unscrupulous ones)  at P19-20/kilo and wet type at P17-18/kilo.

The government buying palay price at P20-22/kilo for now, therefore, would be of big help.

The point is that government must have the correct moral posture- of placing its heart nearest the interest of the poorest sectors of society – which include our 300,000 rice-industry dependent Boholanos (P150 daily income for a family of 5?).

In the end, no matter how big the size of the cake is, if the posture of the heart is right, any action decided and taken –  when one cuts it- it will always just be a piece of cake. Shalom!