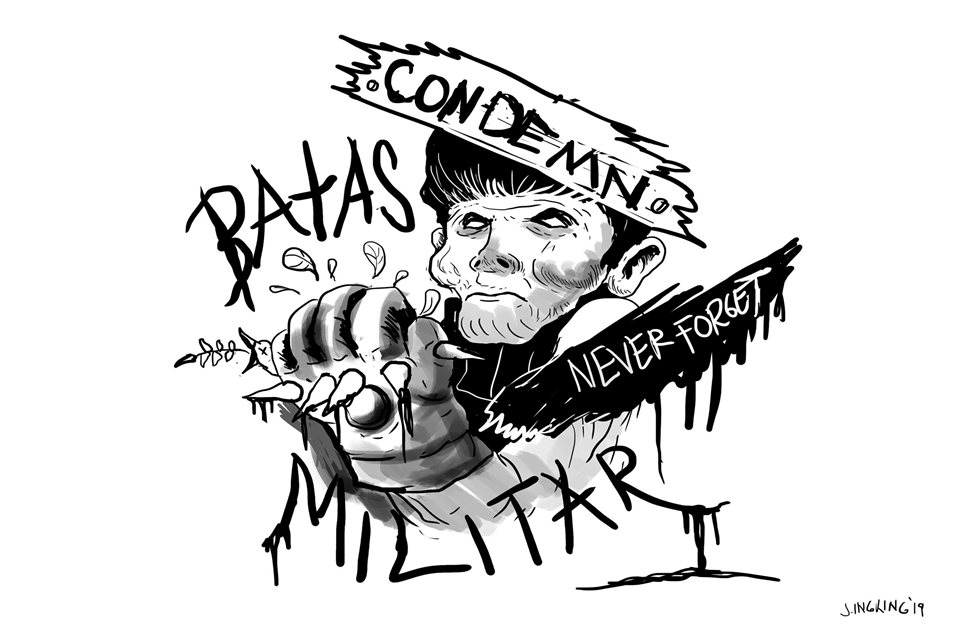 INDIGNATION RALLIES  by the youth and cause-oriented groups in major cities erupted nationwide as the nation laments the cruelty of Ferdinand Marcos’ “Martial Law”, 47 years after.

On September 21, 1972, Marcos suspended the 1935 Constitution and placed media under state control.  He ruled with an iron fist through his generals and the economy through his so-called “cronIes”.

In the face of attempts to revise history, the youth of today is starting to  reawaken to historical facts and vowing “never again to any dictatorship.” If for nothing else, they see the success of their colleagues in Hongkong using “people power” to stand up against the might of Mainland China.

The youth is facing up to the facts- and separates them from propaganda. The Marcos Defense Team, heretofore, had often fictionalized the Marcos tragedy against the logic of documented facts.

The fact is there are 10,000 human rights claimant-victims of Martial Law – for which Hawaiian judge Manuel Real had written two court decisions in 1995 and 2011 awarding P715M to them or about US$1,500 per victim.

Human rights lawyer Robert Swift together with the late broadcaster Filipino Jose Mari Velez filed a class suit in 1986 for the human rights victims. Swift claims there is a total of US$4.3 B in unsatisfied damages arising from the Real judgment in Hawaii.

In 1997, the Swiss Federal Supreme Court ordered millions of ill-gotten Marcos deposits in Switzerland- to be given to the Philippine government and the latter recognized the forfeiture of such worth P35-B in 2003.

On the other hand, through the PCGG (Philippine Commission of Good Government) and other institutions, RP had gone into meticulous compromise negotiations with the so-called “cronies”  to return billions of pesos worth of cash, properties, and shareholdings to avoid their criminal prosecution.

Another P1-B illegally stashed deposits in Singapore has been recovered and Roxas, the treasure hunter, from whom Marcos allegedly stole the Yamashita’s Golden Buddha statue was awarded $3-M (about P 150M).

The fact is in 1985-1986, economic mismanagement and dishonesty in reporting economic figures caused the country to be considered a financial pariah -whom no one would deal with. The economy stumbled and GDP was on a negative growth rate.

But today’s youth is slowly waking you to the reality of the violence and wholesale graft and corruption during Martial Law.

Claiming the NPAs were already at the gates of Manila, Marcos declared  PD1081 declaring Martial Law  ( 16 years) until “people power”  swept him away from the Palace after a fraudulent snap election and installed the widow Cory Aquino ( of martyred hero Ninoy Aquino) into the presidency.

But even the dreaded Marcos had “branding sense”. He wanted a strong, macho image of the Philippines as a hard-nosed dictator in 1972, where he constituted himself into a “committee of one” in making decisions for the entire country.

Often seen in impeccable “barong Tagalog”, Marcos imbued his leadership with the machismo image. Faking war medals to boost his “war hero” image, showing off a sculpted torso, while shadowboxing before a sycophant media (till his body gave way to lupus disease) and speaking in a managed baritone voice were samplers of his feeble attempt to project a “strong leadership” style.

The strong man Singaporean Lee Kwan Yew just laughed off Marcos’ public posturings as he succeeded with his own brand of dictatorship in his island-nation.

Marcos married the tall Visayan lass Imelda Romualdez- who had the beautiful face of Venus and a soaring singing voice- both of which Ferdinand did not have. Psychologists often say we tend to love ” the person we want to become” and, through marriage, become them by inspired osmosis.

But the burden of too much Martial Law excesses soon broke down the “Maharlika at Maganda” myth of the Marcoses.

It is true that the Marcoses are partially back into power. Only son Bongbong will be -or not be- the vice president depending upon the verdict of the poll tribunal officially. Sister Imee, former Ilocos Norte governor, is now a sitting senator.

But in many of the colleges and universities in Manila and the big cities, the Marcos name is still not held in good esteem. Even the apolitical Irene Marcos ( a pianist-artist) has not been spared the ostracism by students.

In the decision to bury the remains of Marcos in the “Libingan ng mga Bayani” attended by a few relatives and loyalists, some Millenials were holding pocket rallies protesting the same in 2017. The scenario:

Meantime, at one time, the Guinness Book of Records had called the Marcos tandem as a “Conjugal Kleptocracy” who allegedly stole US$10-B of the nation’s wealth.

Guinness said so, not the propagandists.