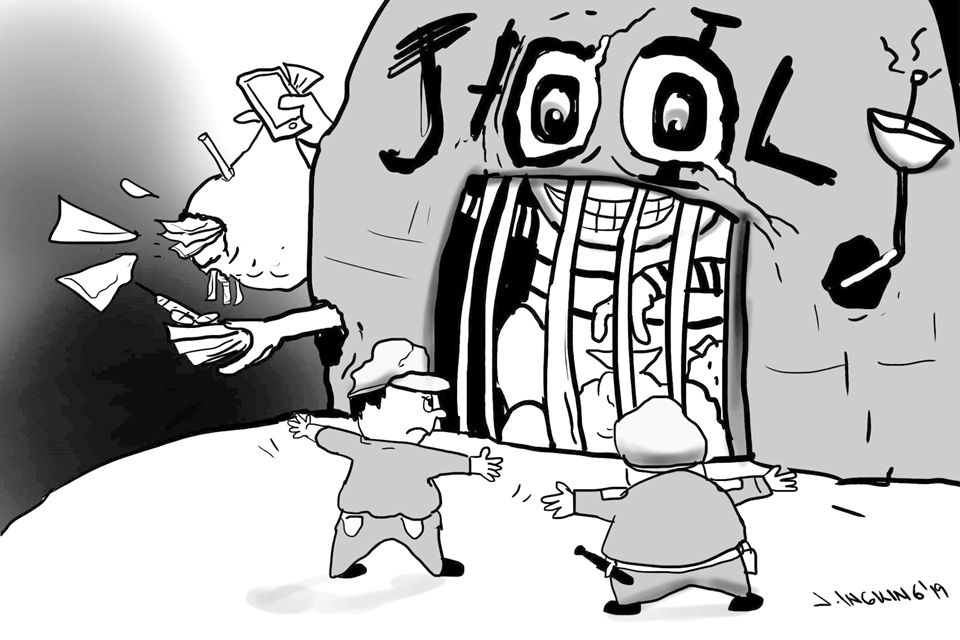 TO THE BOHOLANO PUBLIC, it’s not usual for  P10 million worth of shabu to be seized just from one person. But believe it or not-such seizure happened last Sunday here.

What makes it worse is that the chain of command communication allegedly comes from the Bilibid Prison. Not the supply literally (because they cannot manufacture shabu behind bars) but the ordering and the communication as to direct the shipment of shabu to Bohol was.

And of course, to the rest of the country, what an irony? The drug distribution nerve center is inside the country’s biggest penitentiary- the very institution made to punish the worst of criminals in this nation.

Now, who would believe that nobody from the powers-that-be is/are behind the continued proliferation of drugs when originating from the Bililbid Prison, a tight-security place where prisoners are not even supposedly allowed to get hold of mobile phones to communicate -much less market the dreaded prohibited shabu.

If inmates have cellphones, obviously common sense tells us that the prison officials are in cahoots with these drug marketers or are at least are criminally negligent.

Drug suspect Alan Ben Caberte from whom the P10 million shabu was seized was getting instruction from a  supposed cousin, a convicted kidnapping personality by the surname of Fernandez. We recall that this “source” appears to be the same person behind the celebrated kidnapping case in Tagbilaran involving a student of Bohol Wisdom School- years back.

So he is kidnapper promoting himself as a drug dealer inside the prison cell of Bilibid.  Then our national penitentiary must be a superb “educational institution” of the wrong kind, Watson. Giving criminals masters degrees in higher forms of criminality.

To be a fair-on record, more shabu is seized in Bohol now than before. Easily by the hundreds of thousands of pesos worth up to millions. Now, one may ask where should the authorities start to minimize, since apparently- eradicating seems like an impossible dream?

Perhaps, the first thing that the new Bilibid management is to “lockout” the place so that no communication can ever be made inside. Jammers and other high-tech gizmos are needed.

We had earlier postulated on this page before that there be a designated isolated island with the likes of Alcatraz -far from the mainland where no communication can reach these criminals- and dump them all there. And their only way to escape is to swim the ocean to feed themselves to the sharks- which are, anyway, their distant cousins.

Second, we need to tighten our ports of entry since the supplies are not flown via drones. They pass through ports. We, therefore, need more K9 sniffing dogs at the piers and airport. ‘

We only know of 4 dogs while we have 12 ports all over Bohol, We suggest that we do a “copy cat” of what the Philippine Ports Authority (PPA) is doing, We learned from PPA Port Manager James Ganatalao that  maintaining each dog including its handler and food would  cost P1 million per dog per year,

We think our local government units where there are ports can afford such a budget using their huge intelligence fund. Perhaps bigger ports like  Tubigon, Jagna, Talibon and Ubay would need more than four dogs while Tagbilaran Port might need eight dogs.

We challenge the LGUs of these towns with ports to appropriate in their intelligence fund budget for sniffing K9 dogs.  This will not seal the province from drugs, but it will discourage the couriers as they would have to hire pump boats and not dock at their convenience at the ports and, thus, increase their “marketing costs”- these malevolent crooks.

We are sure that, at this time, the couriers of drugs are arriving at our ports just like ordinary tourists.

Likewise, the roll-on-roll-off (RORO) ports should have the vehicles tightly checked as this shabu could be placed discretely in these vehicles on board.   This is as far as the “supply” is concerned.

What about the “demand” side? What is clearly needed is the rehabilitation of these drug addicts. First, we do not have a drug rehab center despite the “big talk” of politicians who just wanted to earn brownie points with the president and the public but never acted on it.

Second, we do not have ready jobs for the “reformed” addicts after they decide to quit drugs, So obviously, for lack of things to do and to earn their keeps, they will go back to their favorite past addiction- which satisfies their craving and is a “quick bucks” industry.

The third thing that contributes to making this drug campaign less successful is this “plea bargaining” legal way out which allows arrested drug addicts to get off from jail after they will admit guilt or complicity and, thus,  get a shorter jail term.

But this contributes to a long-festering problem. Because there is no limit on how many times this “plea bargaining” may be availed of by a drug addict. So he can get to jail, be released and jailed again even for a dozen times. So, he becomes a “perpetual problem”.

These are just three obvious reasons why there are many still wallowing sick in the drug trade. The public is beginning to suspect that noise that the drug campaign is successful is more of high profile propaganda warfare while the drugs and the drug personalities are going like a revolving door- in a never-ending motion- with society taken in for a sickening ride to hell.

IS GOVERNMENT WINNING THE DRUG WAR?

EVEN PRESIDENT DIGONG DUTERTE  will wipe the sweat off his brow and admit that he had underestimated the complexity and pervasiveness of the Drug Problem in this country. When he initially thought, he would use a few months to eradicate this scourge of society- Digong is exasperated that the problem could outlast his presidency.

Sure, there have been over 14,000 drug arrests -further congesting our many small jails nationwide and about 6,600 in deaths- raising a howl of protest from many international human rights groups.

And yet Digong seems to have gone years older fighting this drug war which he himself said cannot be swiftly solved because of local public officials, high-level government men, the police and military and even the judiciary are participants as villains in this pernicious morality play that haunt thousands of Filipino families. Consider these.

There is a Bureau of Customs that sets free billions of smuggled shabu- which evaporated in the Philippine atmosphere. As stated above, a Bilibid which is the Main Office of the Philippine Drug Industry.  The Chief of the national police is accused of lending his power to free “ninja cops” caught selling confiscated drugs in Pampanga in 2013.

The PDEA accusing some PNP as still coddling “ninja cops” up to now and the president himself saying three top-level officers in the PNP are doing drugs. And some mayors using the protective mantel of the police to shield their participation. And some judges killed due to their participation -one way or the other- in the nefarious drug trade.

What, indeed, is happening to our country, Generals?