“Oh, when the saints come marching in” 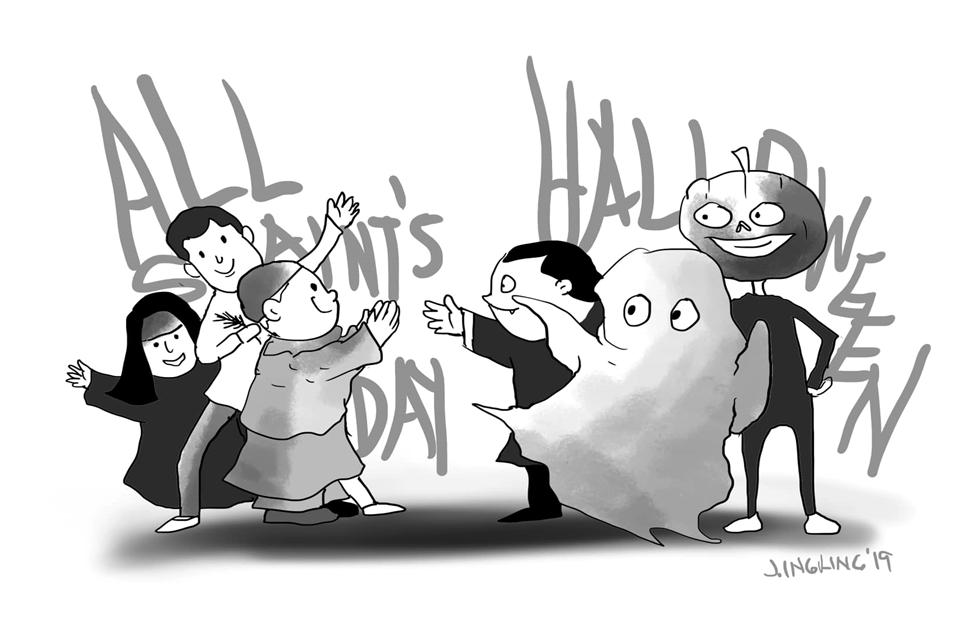 “Oh, when the saints come marching in”

HALLOWEEN IS A PAGAN RITUAL, observed for centuries in many parts of the globe. It is usually celebrated on October 31, on the eve of All Saints’ Day.

It is this time of the year that Juan and Maria are encouraged with “to visit their dead or the dead will visit you” threat. It is this time when it is erroneously but popularly taught that the dead are allowed to walk among the living. For whatever reason, we do not know- for there are 365 days in a year.

It is a celebration characterized by men, women and children dressed in ghoulish-dead or eerie-devilish costumes, the scarier, the better the chance of winning “Tonight’s Ugliest”- a reverse beauty contest.

In Hollywood, the latest “winners” in this weird encounters of the worst kinds include the singer Adele, dressed as a sexy pirate whose escort is Satan himself with two horns and clad in a checkered garish suit and another singer Lady Gaga, clothed (or unclothed) in a sexy fish-net garb topped by an evil one horn like a unicorn. See, what we mean?

On the other hand, it is the ultimate insult for Pedro to be told that day to remove his mask- when he is not wearing one. (Laughter)

Many cult practitioners, likewise, also use these days to play the macabre “Spirit of the Glass” table game – to communicate with the dead and give them questions to answer. “Who shot Liberty Valance?” (laughter).

A word of caution.

The Bible may not mention the word “Halloween” but clearly modern customs on that day are based on false beliefs about the dead, invisible spirit or demons. “While others view Halloween as harmless fun, the Bible indicates that the practices associated with it are not.”

In the Jerusalem Version (Bible)  Deuteronomy 18:10-12, we are warned:” There must never be among you who… consults ghosts, spirits, or calls up the dead.”

In the New International Version (Bible) Corinthians 10:20-21: ” I do not want you to be participants with the demons.  You cannot drink of the cup of the Lord and the cup of the demons too.”

How did these paganistic, animistic rituals of Halloween start, anyway?

It started with the Roman Festival where the Romans hold a big feast every first day of November in honor of the goddess of fruit trees named Pomona. Meantime, in England, the old priests of ancient Britain, known as droids,  hold an autumn festival during which ghosts and the dead were believed to come back and roam around the earth to visit their friends or play pranks on the other living.

While waiting for their coming, people used to build big bonfires during the night to scare away the evil spirits and witches.

Later, the Christians observed another feast during the same night to take the place of the pagan feast. Much later, the two feasts were merged into one grand universal celebration on October 31 known as Halloween.

It was, therefore, a pleasant surprise to recently witness an innovative ploy hatched by pro-active bishop Abet Uy in organizing a “Parade of the Saints” as we observed All Saints Day.

Some 38 lovely kids, were handsomely dressed in their respective saint’s costumes and paraded from the church through the city thoroughfares to the Dampas cemetery. And so ” the saints did come marching on” and we are sure, even the evilest of evils would have melted at the sight of such glorious spectacle.

So much of our subconscious has been preconditioned by years of observation about the spookiness of Halloween that we need a conscious effort to jolt us into the real meaning of the observation of All Saints Day and All Souls Day. This is one of them. It is more effective than the biggest bonfire to turn off the evil spirits around.

Bohol, after all, is a very Catholic province with centuries-old churches in towns and each venerating their own patron saint. So, we have no dearth of beloved saints and the country has even produced two of our own saints: Lorenzo Ruiz (1600-1637) and Pedro Calungsod (1654-1672), both martyred one in Nagasaki, Japan, the other in Tumon, Guan.

It is instructive that our two Filipino saints are laymen-missionaries- which is prophetic for the growing role of the laity in the ever-challenging task of evangelization in a growing and woefully increasingly materialistic world.

We earnestly hope from hereon and going forward, every year we will witness again the “Parade of Saints” to help people internalize the true meaning of our Nov 1 and 2 celebrations.

Finally, it is apropos for us that when we visit our dearly beloved departed ones (in the cemetery) that we do not just look at the condition of their wellbeing in the place of the Great Beyond. It is also germane to consider the immortality of our own very souls and the finiteness of our bodies.

Going there, for a moment, feeling close to them once more should make us come face to face to the reality that someday we also will join them.

We begin to ask these questions.

This mad rush, this hectic pace, which has become our way of life, where will this lead us to?

This insatiable lust for power, this inordinate love of oneself, this greed for excessive wealth, what are all these really for?

Stand silent and alone before an ornate tomb or a lowly grave. Think. The answer is there.