VP Leni and the ‘queen’s gambit’ 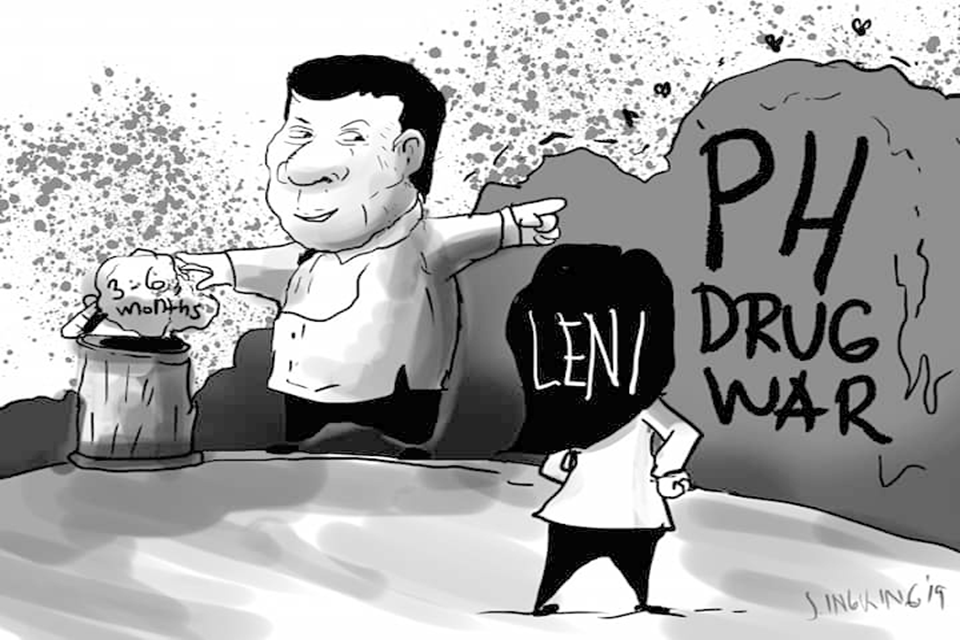 VP Leni and the ‘queen’s gambit’

THE “QUEEN’S GAMBIT” is one of the popular opening moves in a chess game meant to lead to a checkmate.

Analysts say this is precisely what the Duterte Administration allegedly had in mind in making the lady vice president Leni Robredo as Co-Chair of the Anti Illegal Drugs Campaign.

Well-meaning friends cautioned VP Leni that it is a “trap” as illegal drugs is the biggest undefeated social enemy in the world. It is a No-Win situation. Feisty actress Agot Isidro said it best in Tagalog: ” Duterte started it, he bungled it- he should clean it up”.

But the lawyer from Sorsogon and widow of the possibly the “best president the Philippines never had” -in the late Jesse Robredo- had a different tack.  “If it means I can save one life from being unnecessarily wasted, it will be worth my try.’  Her monitoring of the police can be a deterrent. So, there.

In summary, the thesis of VP Leni is (1) the drug problem is not only a police matter but a health and social issue (2) rehabilitation is better than summary execution or incarceration and (3) the drug war should be brought strongly to the suppliers’ side and not to the often- hapless users (demand).

While drug killings have been pegged by government at over 6,000 deaths, unofficial tallies record 20,000- a number described by Amnesty International as having reached “the threshold of crimes against humanity”.

Meantime, a  remarkable 96% of Boholanos interviewed during the top-rated station dyRD weekly show “Radyo Merkado”- when asked about Leni’s gamble- thought she was right in accepting the job.  They claim there are many trigger-happy cops who kill in abandon- even “suspects already on bended knees.”

Figuratively, the fight should be away from the shabby shanties of the poor into the gated subdivisions where many of the Drug Lords are allegedly hiding.

The chicken-or-egg question is often asked. Are there drug users because there is available supply? Or do supplies come here because there is a big demand for drugs? VP Leni wants to shift the load of the campaign to the “constricting of supply”.

So, where are the Drug Lords? They are protected by a huge layer of network matrix that they are hard to corner- but they should be. Except for the names like the Espinosas of Leyte, the Parijinogs of Ozamis City and one other Panay drug lord, not much is heard of the Big Boys.

They are instead asking why the president’s alleged friends (identified with the trade) like Peter Lim and Michael Young are scot-free. In the 2019 polls, the Palace, according to Rappler, provided a list of local execs in the narco list- eight of them reportedly belonging to the PDP-Laban party. Are they not part of the supply cartel? Or protectors- in the least?

What about the Bureau of Customs – manned by many ex-military men (both in the seaports and airports) who are supposed to stop the entry of drugs here? The Coast Guard who are supposed to watch the “floating bundles of shabu” tossed to reach our many coastlines??

The local government executives, police and corrupt judges? The ex-PNP chief and his “ninja cops” entourage? The National Bilibid manned by  (sic) hard-core fighting men in uniform  – is it no longer the Head Office of the Philippine Illegal Drug Industry?  All of the above are part of those which make the supply chain network, and, therefore, makes drug preponderant in this nation? Them- VP Leni should target.

The lady executive had consulted – and lauded by the Palace- the United Nations Office on Drugs and Crime and the United States Embassy whose A-1 Intelligence network can pinpoint by satellite where the drugs entering the country are coming from. That’s addressing the supply side and not making a god of “Operation Tokhang”.

Boholanos interviewed also said that PDEA Chair Aaron Aquino should not be secretive about the so-called “narco list” – away from the eyes of VP Leni. Why not share this list- which is vital to chipping away at the veneer of the supply side of drugs? Instead, Aquino challenges the vice president to be present in the drug raids- opening the second-highest official of the land to unnecessary danger to her life and limb.

Of course, she is aware that the “demand side also needs attention.”Robredo is for rehabilitation in scientifically-based and adequately manned centers nationwide.  So far, all Rehab Center talks have been photo-ops and PR rah-rahs of politicians -including the giant one promised by the Chinese to be built in Nueva Ecija.

There is one “planned” to be built in tourist-center Carmen- where will the funds come from and personnel to administer it? We fully endorse that not just in every region- but every province should have a Rehab Center.

Addiction needs detoxication and mental re-education while dumping these addicts in overcrowded prisons only aggravates their malady or contaminate even the other inmates.

More than that- after rehab, addicts need a new source of livelihood – that can be pre-arranged throughout the educational packages available at TESDA perhaps? Dignity and a new sense of self-worth are important to enable them to assimilate themselves back into mainstream society and prevent them from becoming recidivists.

In this regard, VP Leni had a crucial meeting with the COBRA group-no, nothing to do with venomous snakes- but the Community-Based Drug Rehab Alliances- made of public groups, civil society and faith-based groups nation-wide.

We do not know what traps have been laid in the underground versus the VP along the way in the future-with bombs meant to detonate on her face- but so far, Leni Robredo is so good.  Beginner’s luck? We know only little of the basics of the chess game.

Robredo said there is nothing political about her gamble- because the risks and stakes are very high and even the strong-willed president seems to have been frustrated by the enormity of the problem and gravity by which some of his own trusted men seem to short-circuit his intentions.

But this is a ‘high risk-high reward’ kind of game, we believe.

Played well- and with lots of luck, VP Leni could transform herself from a reluctant vice-presidential candidate (2016) into a serious presidential bet for 2022.

With Bongbong Marcos’ poll protest faltering, who really knows what are in Leni’s cards? Stranger things than this have happened in the past.