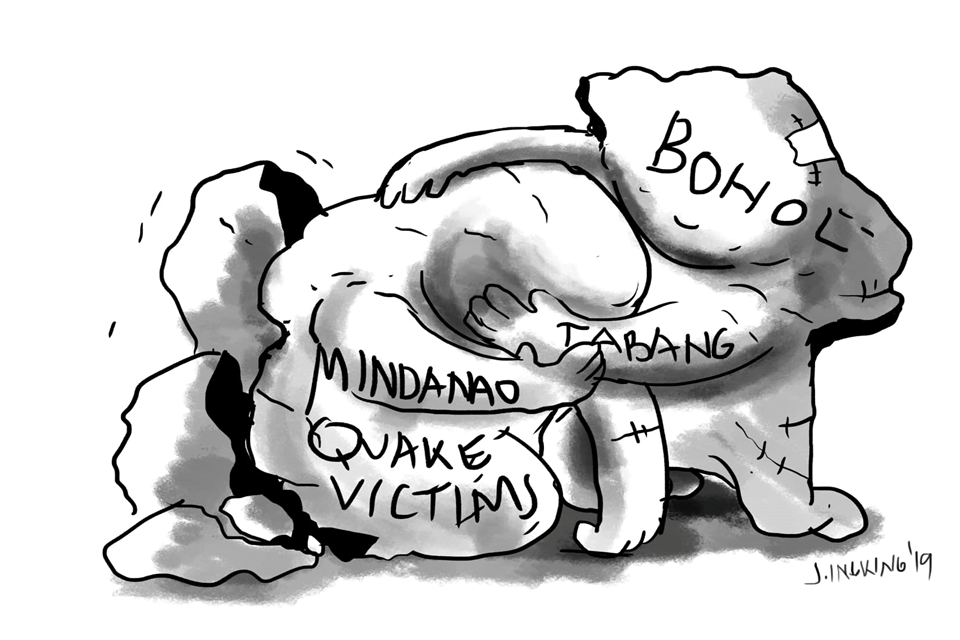 KINDNESS BORNE OUT OF COMPASSION was once again displayed by many Boholoanos recently in “Tabang Mindanao.” It may be- perhaps- kindness  generated from a feeling of “deja vu” – having been many times themselves victims of the wrath of Mother Nature.

There is almost no egging needed for many Boholanos to respond in compassion to the sad plight of our brothers and sisters afflcited by calamities in other provinces. When the massive earthquake assaulted Bohol in 2013 (and in other storm calamities)- it is as if a huge chunk of humanity poured their prayers and blessings on us.

They remain fresh in our memories and forever etched in our consciousness.

The Bohol Chronice Radio Corporation bannered by The Bohol Chronicle and station dyRD -as by tradition- picked up the baton and started the Mindanao Quake Victims Campaign ( “Tabang Mindanao”) for 14 days.

In two weeks, Boholanos’ giving nature- accumulated a huge truckload of relief goods and close to an unprecedented million bucks (P852k rounded) coming from the hearts of the rich and the poor alike. That is a moving difference.

Ordinary tricycle drivers and common workers – perhaps skipped a meal and walked home one day- to save up for their individual donations. That moves the heart because we know how tight their daily budget is to make ends meet.

There were those who insisted to remain anonymous- literally following the Bible edict of “not letting the left hand know what the right hand is doing.” May God bless their souls a hundredfold.

To those who identified themsleves- there is nothing wrong with that- those moves edify and touch others to do the same when new calls for solidarity behind a tragedy is being trumpeted in our land in the future.

To the wealthy businessmen who chipped in their donations, it is probably part of their Corporate  Social Responsibility (CSR) to a nation that had served them well financially.

Even CBCP President  Archbishop Romulo Valles, amazed at the bigness of the heart of Boholanos. was among those who expressed  elation and proud of the uniqueness of the Boholano’s kind heartedness. In the end, some of the donations may have unwittingly benefited some of the traveling Boholanos who have since migrated a long time ago  to Mindanao and suffered the tragedy.

Indeed, what goes around, comes around.

This public service of BCRC is a part of the lasting legacy of the BCRC Founder Atty Zoilo “Jun” Dejaresco to the people of Bohol. He was , in many ways,more Boholano than many Boholanos who felt for the Boholanos in these difficult times.

It is an honor to continue this legacy of Jun Dejaresco- seventeen long years since he passed on to the Great Beyond. We are certain he is smiling from Way Up There at the consistently compassionate beings of Boholanos -even to people they do not know or will ever meet.

We express our heartfelt gratitude to all of you continue to have  given to the crusade. No this is not a BCRC achievement- it is just an honor to be receiving the trust to be a vehicle to anchor the collective help tor Mindanao.That is enough reward for us.

One thing we can asure all is every centavo has been receipted for and received by the intended constituents. And the goods in kind appreciated by the needy.

Let us also thank the Alturas Group for the land tansporation and logistics and Lite Shipping for the sea transport that completed the Equation for Charity for Mindanao.

On the other hand, Bohol also witnessed how it has  immensely contributed to the vineyard of Christ .

Coincidence or by God’s appointed time, the country will be celebrating the 500- years of Christianity in 2021.

As we celebrate the 500th year,we as a Filipino nation has  contributed in a large way to the celebration,. This is the  assumption of Archbishop Bernardito Auza as the new  Papal Nuncio to Spain is the best gift of thanksgiving from us,

History says it was Spain under the Cross brought by Magellan and subsequent journeys (including that of Juan Miguel de Legaspi) that firmed  up the footings of Chrstianity on our shores, once steeped in paganism and fragementism.

It  also remains on record that Bohol has produced the most number of bishops among all the provinces in the country, As well as a  bountifuly harvested source of priests, nuns and other religious. Our Chiristian laity is also as vibrant than ever.  Shalom!

10 YEARS AFTER- NO CONVICTION IN MAGUINDANAO MASSACRE

IT IS A HEART-RENDING  Commentary on the Philippine Justice System that the Maguindanao Massacre perpetrated by the Amapantuans resulting in 58 deaths (and 32 media men) remain  with zero conviction to date.

The conviction was supposed to be promulgated on November 20 but the Quezon City judge again asked for a 30- days extension because of “volumnious documents” which was granted by the Supreme Court on November 9.

This Page will therefore make a countdown -up to December 19, 2019 (3oth day) that Justice will finally descend upon the nation. Do not ask for whom the bells tolled for  when the 58 victim were buried. The bells tolled for all of us- equal victims in the sense of seeing an injustice continue . Justice delayed is always justice denied.

Remember the names of the  main suspects: ex- governor of Maguindanao Andal Ampatuan Jr (the “brains”) who died while in custody,Zaldy Ampatuan, ex-governor of ARMM, Andaj Jr , ex-mayor of Datu UnsayTown and Sajid, former Vice Governor of Maguindnaao. Ninety of the 197 suspects are also still under custody.

SO AS OF TODAY , NOVEMBER 24, 2019- NO JUSTICE YET ON THE MAGUINDANAO MASSACRE ( NOVEMBER 2009). THIS PAGE WILL NOT STOP COUNTING UNTIL JUSTICE IS SERVED.